On July 19, and while Israeli forces were brutally suppressing nonviolent Palestinian protests in occupied East Jerusalem, Radiohead crossed the Palestinian boycott picket line to play in Tel Aviv. Most importantly, and just as Palestinian and international human rights defenders had cautioned, Israel played Radiohead, to the last note.

Radiohead stubbornly ignored the voice of the overwhelming majority of Palestinians appealing to it not to undermine our rights and our Boycott, Divestment and Sanctions (BDS) movement as an indispensable, nonviolent means of achieving them. All that we have asked is for Radiohead to do no harm, if they can do no good, to our struggle for freedom, justice and equal human rights.

At concerts throughout Europe, Radiohead fans raised Palestinian flags and amplified our call for no-business-as-usual until Israel complies with its obligations under international law.

Yet Radiohead went on with their show in Tel Aviv, allowing Israel to use their brand for whitewashing, or art-washing, its siege of Gaza, forced displacement of Palestinian communities in Jerusalem, the Negev and the Jordan Valley, and incessant construction of illegal settlements and walls in the occupied Palestinian – and Syrian – territory.

OPINION: Radiohead in Israel – A fig leaf for apartheid

To add insult to injury, Radiohead professed to know better than Palestinians how we should resist our oppression, in a classic colonial attitude. In doing so, they became the propaganda darlings of the Israeli government and its lobby groups.

Dozens of tweets from Israeli government officials, ambassadors and Israel lobby groups gloated over Radiohead’s decision to violate the cultural boycott. Israel, after all, sees “culture as a hasbara [propaganda] tool of the first rank,” as a ranking Israeli official once admitted.

Dialogue that has been going on literally for decades has failed to bring us any closer to attaining justice and our human rights. On the contrary, it has served Israel's agenda superbly, by providing it with a perfect fig leaf.

Radiohead was also celebrated by US conservative pundit Glenn Beck, Fox News, and a cofounder of the far-right Tea Party Patriots. This new fanbase should be cause for concern for a band known for its progressive politics.

Two days after the election of Donald Trump as US president, Radiohead frontman Thom Yorke tweeted, “In the coming days, commentators will attempt to normalize this event.” Yet Radiohead have done just that for the Israeli government, with leading right-wing Israeli media describing the band’s public opposition to BDS as the best gift of “hasbara Israel has received lately“.

It is hard to understand what motivates such a prominent band like Radiohead to step over Palestinian rights this way, but the legacy of the cultural boycott of apartheid South Africa may provide some insight. In 1984, Enuga S Reddy, director of the UN Centre Against Apartheid, said:

“We have a list of people who have performed in South Africa because of ignorance of the situation or the lure of money or unconcern over racism. They need to be persuaded to stop entertaining apartheid, to stop profiting from apartheid money and to stop serving the propaganda purposes of the apartheid regime.”

On the bright side, months of campaigning to convince Radiohead to cancel their Tel Aviv gig has reached mainstream audiences worldwide, raising awareness about the struggle for Palestinian rights among millions who may not have been engaged in it before.

Even before this campaign, BDS had already started to have a palpable impact in the cultural mainstream, including in the United States. Of the 26 Oscar nominees in 2016, for instance, none went on an all-expense-paid Israeli propaganda trip, and out of eleven National Football League players in the US, six turned down a similar offer by the Israeli government.

Days ago, however, former R.E.M. lead singer Michael Stipe suggested on Instagram “dialogue”, not boycotts, to “bring [Israel’s] occupation to an end and lead to a peaceful solution”.

But dialogue that has been going on literally for decades has failed to bring us any closer to attaining justice and our human rights. On the contrary, it has served Israel’s agenda superbly, by providing it with a perfect fig leaf.

For dialogue to be ethical and effective, it must recognise that all humans deserve equal rights under international law. Otherwise, it would privilege the oppressor and entrench the notion of coexistence under oppression rather than co-resistance to oppression – a key condition to ethical coexistence.

Reconciliation and dialogue in South Africa came only after the end of apartheid, not before, as Desmond Tutu never gets tired of repeating.

In one of their songs, Radiohead say, “Some things cost you more than you realize.” By insisting on siding with the oppressor and ignoring the appeals of the oppressed Radiohead became part of Israel’s show, eroding their progressive credentials.

But there is always time to do the right thing and choose the right side of history.

Omar Barghouti is a cofounder of the Boycott, Divestment and Sanctions (BDS) movement for Palestinian human rights and corecipient of the 2017 Gandhi Peace Award. 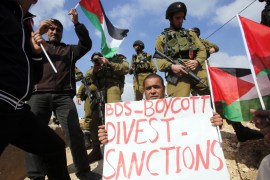 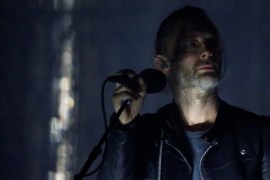 Palestinians expect nothing good from Trump

Dropping the last mask of democracy