This year Eid al-Fitr came as a relief from a month of bloody events. Most of us hailing from countries that have witnessed, or continue to witness, the horrors of the war on terror, have learned to live with thorny contradictions wherein joy and pain rarely find separate homes.

For the Australian Muslim community, this year’s Eid al-Fitr hasn’t been unusual in this respect. Many of us reflected on the troubling state of the Ummah globally and the feeling of being under siege in a growing hostile environment locally, but there was a remarkable change in tone to our usual concerns. Some Muslim leaders came out on the day criticising the frequent demands on Muslims to condemn terrorism.

In an interview with Australian network SBS, The Grand Mufti Ibrahim Abu Mohamed expressed his frustration: “Some people in our community expect us to act as recording machines (on repeat). We have condemned terrorist attacks. What more can I say?”

The president of the Lebanese Muslim Association expressed similar frustration at the Eid prayer at Lakemba mosque in Sydney, calling on Muslims to be “unapologetic Muslims” and insisting: “I am not here to answer calls by racists and bigots to condemn something that is not ours to condemn. We do not own these actions nor these individuals, to have to speak out against them.”

The vacillation between good and bad Muslims doesn't so much offer a dialogue within Australian multiculturalism; it renews a commitment to a national identity without fracture.

Earlier in the month, the peak body of Muslims in Victoria, the Islamic Council of Victoria (ICV), announced their Safe Space Project for young Muslims to communicate their concerns without consequence in an effort to build stronger relationships of support and understanding. The programme was proposed after concerns were raised about the mental health and vulnerabilities young Muslims might face. In response, Victorian Premier Daniel Andrews threatened to have the body’s funding reviewed, insisting: “There is no safe way to rail against the West.” Soon after, the ICV announced it would not be attending the premier’s annual iftar, without his providing an official explanation.

These incidents signal a shift in Australian Muslim discourse from a politics of condemnation wherein Muslims are presumed to be on standby to condemn every incident labelled as terrorism, to a politics of refusal.

The politics of condemnation is an iteration of respectability politics that is activated without fail after every violent and morally objectionable event involving Muslims, forcing them to answer for what Joseph Massad describes as the “atrocity exhibition”. Seeking to dissuade an increasingly hysterical public, whose anxieties – whipped up by dramatic media images and political rhetoric – demand frequent addressing, Muslim leaders and representatives plead Islam’s case. Marking Muslims with the stain of terrorism, proclamations of Islam’s peaceful nature, how it has been hijacked by perverted readings, and Muslim commitment to the fight against terrorism, are piled on in a fraught tone.

Caught within this binary of good Muslim/bad Muslim, the conversation over the years has been stifled within its disciplinary folds. In these series of negations, Muslims cannot speak without reference to their pejoratives.

This dichotomy of good and bad Muslims sustains the semblance of tolerance at the heart of Australia’s multicultural liberalism. The type of community imagined in this process of continued splitting and projecting is essentially a perverse communion – a national investiture, one might say, in the figure of the bad Muslim.

For those who make the demand and can speak in the name of the nation, this fantasy provides a boundary of non-belonging, a way of excluding any possible overlap between perceived self and others. In this sense, the vacillation between good and bad Muslims doesn’t so much offer a dialogue within Australian multiculturalism; it renews a commitment to a national identity without fracture.

It is in this post-colonial scene that critics of empire such as Edward Said and Gayatri Spivak realised that the politics of representation is not simply about misrepresentation of the other; it is about the coming to being of “The West” and its others.

Islam is something that is brought into meaning through antonyms that mobilise speeches, debates, academic studies, the culture industry and the personal questions often asked of Muslims: Islam and the West, democracy and Islam, women and Islam, Islam and human rights. Is there an Islam without its ideological gatekeepers? Can Muslims speak beyond them? The politics of condemnation demands that Muslims first prove their right to speak.

As Muslims are held between the demand to speak and the invalidation of one’s voice, Islamophobia rages across the globe, captured in countless polls and studies. These sentiments are most visible in the increasing scale of controversies: halal certification, segregation debates, mosque protests, and the banning of Muslim women’s dress. With the focus on “deradicalisation” (from “what to where?” is rarely discussed) the community is perceived as a potential enemy within, subject to surveillance, and questioned on so-called national loyalties.

Spouting the sanctity of purging terrorism from Islam, Muslim public figures who occupied the media landscape for years – often without expertise or with little consideration of the implications of their words – would pontificate how Islamophobia was the result of a lack of knowledge about Islam. Refusing to reassess their response, we were told that the public just needed to know the “truth” about Islam.

Strangely relying on the narrative churned out in the speeches of Western politicians, who remind us that this is a “war within Islam”, Muslims are called on to rescue Islam from itself. Promoting Islam in the best positive light is to salvage Islam. But this strategy reveals a naive understanding of not only the geopolitical landscape by reading it as “culture talk” – as a product of the war of ideas, but also of how racism works.

Not only does it implicate the victims of racism by positioning them as responsible for the fear and anxiety they trigger in the public, the politics of condemnation also assumes that racism is driven by a failure of knowledge. By correcting people’s perception of Islam, it presumes that this hostility will cease. Indeed, Islamophobia appears as persistent questions about Muslims: What is Islam? Why do Muslims hate us? These questions are driven by unease, suspicion and fear that no answer can satisfy. They attempt to create, what Judith Butler – reflecting on white paranoia – called the “intent to injure”, by repeatedly reminding the public of the trauma of past attacks.

It has become increasingly apparent to many members of the community that the strategy to combat Islamophobia through education via condemnation has utterly failed. The first significant recognition was in the aftermath of the 2012 protest in Sydney against the poorly produced anti-Islam film, Innocence of Muslims. The protest was widely condemned by Muslim bodies and self-proclaimed representatives, after reports of violent altercations. Wringing their hands from the thought of a backlash, they rushed to condemn the “rioters” with public statements without speaking to those involved, ignoring the role that aggressive police tactics played in the incident. The incident marked a turning point, raising issues about whose interest community representatives represent and the need to tear up the script that centres the Muslim as the problem.

Never have we seen such formal denunciation of the role given to Muslims in the theatre of the war on terror. This change in tone, most likely the result of (scrutiny) fatigue, signals a change in the community’s role in the politics of condemnation. The apparent amnesia of the unrelenting demands on Muslims to “condemn” has finally eroded the fantasy required to sustain the discourse. The discourse is inherently ambivalent, relying on the operation of delicate constellation of subjective positions for its guarantee.

If we consider the familiar script as sets of practices, speeches and policing techniques already in deployment we can begin to appreciate the tension between the empty rhetoric of condemnation and the semblance of civility in the preceding demand to condemn as a signal of gnawing anxiety. Insofar as you are playing into its impossible demands, the more you speak to your innocence the more you stand accused.

Years of educating the public through condemnation statements, mosque open days, media appearances, donning the national flag over one’s head, speed-dating Muslims, Hug-a-Muslim, Hijab Days, have not quelled the paranoia of these questions. What is remarkable is how there has been little acknowledgment of how Islamophobia is about the performance of these questions, and how the answers are already presumed through the interrogation of Islam.

OPINION: Islamophobia and beyond

The Islamophobe knows more about Islam than Muslims do. It is this certainty that motivated former Prime Minister Tony Abbott’s avowal that Muslims must speak up, and when they claim Islam is peaceful, they should mean it. Muslims are called upon to speak on not the “primary qualities” of Islam, the supposed object of fear/hatred, but to quell a racist delirium.

These examples of frustration on the part of Muslims, who are rarely identified as victims of post-9/11 racism, gesture to a politics of refusal that says “no” to the collapsing of Islam with terrorism, the interrogation, harassment of the community, the securitisation of multiculturalism. It is a “no” to the ventriloquising of the Muslim who is only animated to fulfil the other’s will.

Refusal, the sociologist Marcel Mauss argues in The Gift, breaks with social relations and a rapprochement of the conditions of these bonds. After nearly two decades of carrying a guilt that was never theirs, Muslims are realising that the conditions of recognition have been built on their erasure by denying them a will of their own. Any deviation from their prescribed role of docility is identified as a symptom of radicalisation. Islam is gradually hollowed out as it is expected to prove its civilisational claims before a scrutinising gaze of human rights, women’s rights and secularism – each mobilised to detect traces of modernity.

These signs of refusal are a welcome change. But to really mine its emancipatory potential, Muslim interlocutors in Australia and the wider West have to take responsibility for their own contribution to the politics of condemnation, and not simply switch discursive gears because the political mood is shifting at the grassroots level.

They should not rush over this important lesson: How did we come to be implicated in Islamophobia? If those on the public stage insist on having their political education in public, this should include the recognition that learning about where and how things went wrong requires the public recognition of one’s historical contribution to the problem – from rallying behind the reductive politics of condemning bad Muslims, silencing and demonising critics, lack of consultation and accountability to community.

At a time where meaning is slowly collapsing with the rise of fake news and of the increasing commodification of ideas and faith, to take a principled stance – no matter what the moral and political consequences are – could be the radical break we need.

Hussein Mohamud’s research is in the theories of race, psychoanalysis and nationalism. 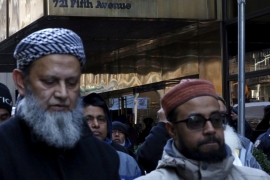