It was June 2000 in Washington, DC – roughly one year before the 9/11 attacks, and the beginning of a decade of Arabs and Muslims being public enemy number one. Jack Shaheen was front and centre, analysing a montage of vile Hollywood depictions of Arabs and Muslims in front of an audience of hundreds at the annual American Arab Anti-Discrimination Committee conference.

Beginning with films showcasing old caricatures of lecherous sheikhs and exoticised women in hijabs, and moving on to more recent cinematic representations of the aircraft hijacker and Muslim terrorist, Shaheen carefully dismantled every damaging trope, old and new, for a crowd on the cusp of facing an unprecedented onslaught of structural and societal Islamophobia.

I sat in the crowd, hanging on to Shaheen’s every word, not yet knowing how immensely important this man’s work would be in the days and years to come. He, the son of Lebanese immigrants, would go on to pioneer an entire field of study, and blaze a path for scores of scholars and activists to follow during the 9/11 decade and beyond.

When Jack Shaheen died on July 10, the news sent immediate shockwaves through the Arab and Muslim American communities. Well before 9/11, when the study of Arabs and Muslims in the media was yet to emerge as an important subject of study, Shaheen made it his life’s work. He ultimately became a pioneering figure whose name today is synonymous with the intellectual protest against the long-standing character assassination of Arabs and Muslims by Hollywood and US television networks.

In 1984 – just six years after Edward Said’s monumental work Orientalism came out – Shaheen published his first book examining the on-screen depiction of Arabs – The TV Arab. The first critical study of its kind, the book examines more than 100 popular television programmes, documentaries and cartoons, revealing just how embedded anti-Arab and Orientalist ideas and images were in the TV industry.

Inspired by Said’s work, Shaheen highlighted that Orientalism was hardly a relic of the colonial past or confined to Europe, but a fluid system that shaped how television writers, directors, and networks portrayed Arabs and Muslims. While Edward Said revolutionised how scholars and thinkers engage with the Muslim world and its peoples, it was Shaheen who exposed that Orientalism was a menace that lived inside our households, funnelled through our television sets.

Shaheen's work is the foundation for a wellspring of research and advocacy aimed at tackling the production of Islamophobia on screen.

The TV Arab would solidify Shaheen as the leading expert on popular representations of Arabs and Muslims on screen, during a decade when Washington’s concern shifted from a collapsing Soviet Union to what Ronald Reagan called “the Middle East jungle”. As a regular speaker at colleges and universities, community gatherings and national conferences, Shaheen spent the remainder of the 1980s and 1990s tirelessly reviewing hundreds of Hollywood films to identify, analyse and archive damaging representations of Arabs, Muslims, or “Middle Easterners”.

Reel Bad Arabs: How Hollywood Vilifies A People, published in 2001, was the product of this work. While TV Arab was concerned primarily with television, Reel Bad Arabs focused largely on films, and analysed new caricatures that emerged with the changing geopolitical landscape of the 1990s, and the fixation of the state and the silver screen with the new boogeyman, the Muslim terrorist.

This critical compendium, adapted into a critically acclaimed documentary in 2006, would become his seminal work and a must-read for those studying representations and misrepresentations of Arabs and Muslims during the 9/11 decade, a period that witnessed the proliferation of harmful depictions on and off screen. But through Shaheen’s works, a new generation of scholars were equipped with the intellectual foundation and courage to tackle them head-on.

Shaheen’s work is the foundation for a wellspring of research and advocacy aimed at tackling the production of Islamophobia on screen. Evelyn Alsultany, Director of Arab and Muslim American Studies at the University of Michigan, whose scholarship also examines the depiction of Arabs and Muslims in popular media, said:  “I would say that for all of us who work on representations of Arabs and Muslims in the US media, Jack Shaheen is an icon. He tirelessly showed that we cannot understand racism directed at Arabs and Muslims today without understanding a century of stereotypical representations that dehumanise them. He always remained optimistic that change is possible.”

Shaheen’s reach penetrated beyond academic spaces, and inspired many of the most prominent activists fighting Islamophobia on the ground. Linda Sarsour, a leading civil rights activist and frequent target of the Islamophobia network, reflected: “Jack was an inspiration to me and much of my own work was centred around his mission: defining who Arab Americans were on our terms.” Abed Ayoub, the legal director for the American-Arab Anti-Discrimination Committee, remembered Shaheen, the man and mentor: “You can always depend on Dr Shaheen to make you smile. His ability to communicate with people of all ages and backgrounds is what set him apart. He will be missed by many, and we will do our best to keep his legacy alive.”

For people stripped of the opportunity to tell their own stories and vilified for generations on screen while ruthlessly victimised off it, we saw in Shaheen not just a critical voice but a inspirational figure to rally around. He was a warm and accessible man and a fierce and critical scholar whose very being countered the vile representations he dedicated his life to undoing. “I want to see the Arab humanity in films that really reflect, that show Arabs pretty much like ordinary people,” he stated on National Public Radio in 2007.

His research will be cited for generations ahead, but even more importantly, the spirit of protest driving his work will be immortalised in today’s front against the escalating demonisation of Arabs and Muslims in television, film, and every space and place beyond and in between.

Khaled A Beydoun is an Associate Professor of Law at the University of Detroit Mercy.  He is also Senior Affiliated Faculty with the University of California-Berkeley Islamophobia Research and Documentation Project. 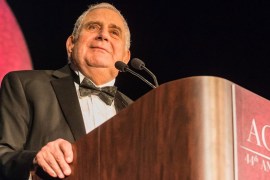 Shaheen dedicated his life to battling anti-Arab ethnic and racial portrayals in US mainstream media and pop culture.