The visit of Donald Trump to Israel and Palestine showed that the return to negotiations will not be easy. But at the same time it made everyone realise that neither Palestinians nor Israelis are willing to refuse or ignore the wishes of the new resident of the White House.

The fact that both parties understand the dangers of rejecting gestures from Washington provides a unique opportunity for the Trump administration to provide a blueprint for a solution. This requires a change in approach, something that President Trump has said in Saudi Arabia that he is open to.

Instead of working hard to get the Israelis and Palestinians to the negotiating table, what the US president needs to do now is to huddle with his advisers, look up the archives of many of the nearly agreed plans and devise a “Trump plan”.

Such a plan, if it is fair and generally in synch with accepted international guidelines, should be announced unilaterally by the White House and even presented to the UN Security Council for ratification. The parties will then be asked to implement a plan instead of creating one. If Israel refuses to do so, someone will remind them that the state of Israel was established following a UN resolution in 1947 – something Jews in Tel Aviv celebrate to this day.

The basic plan for a Palestinian-Israeli deal already exists. It calls for a contiguous, independent Palestinian state roughly within the 1967 borders with some land swaps. It also calls for Jerusalem to be an open city and capital to both states, and a fair solution to the refugee problem. In fact this is pretty much what the Arab Peace initiative, which has been awaiting Israeli response since 2002, states.

Based on so many lost opportunities, it is clear today that the most efficient way forward is not pressuring the parties to go back to direct talks.

This is not to say that some of the details are not important. During the Clinton and Bush administrations, the two major sources of disagreement were the issue of the return of the refugees and the status of Jerusalem. The latter being the one that is more difficult.

On the refugee issue, the Clinton Parameters called for Israel to accept 100,000 Palestinian refugees over ten years under a family reunification scheme.

On Jerusalem, the parameters suggested that Arab neighbourhoods of the city were included into the state of Palestine, that Jewish ones were part of Israel and that the old city was governed under a special arrangement.

While Palestinians accept that the city should be open and the holy sites should be available to followers of different faiths, Israel has been adamant about not sharing the holy city with anyone else.

Today, with such an international vision already on the table, the parties should be asked, cajoled and pressed to sit down and work out the details of implementing it rather than waste their time in talks ad nauseam on what the result of the talks should be.

The fact that neither side wants to anger Donald Trump might be useful in this instance.

While the issue of settlements is important, it is mostly an internal Israeli problem. It is understood that the bulk of settlers living near the green line would be absorbed into Israel, but settlements around the West Bank and especially in the centre of Hebron pose a bigger challenge to the success of any peace plan.

Palestinians have accepted that settlers can live in the state of Palestine as long as they are not living on stolen Palestinian land and they abide fully to the sovereign Palestinian government.

The challenges listed above reflect the complexity of the problem that Jared Kushner and Jason Greenblatt are facing as they get into the details of peacemaking.

Based on so many lost opportunities, it is clear today that the most efficient way forward is not pressuring the parties to go back to direct talks. Instead, the US and the international community should act as an active facilitator rather than a neutral observer in this conflict. The US should be cognizant of international law and fairness while facilitating a deal, since it knows very well that a bad and unfair deal will not stand the test of time.

One possible interim way to break the logjam might be to agree to a plan to end the occupation and to place the occupied territories under a third party trusteeship for a short and agreed-to transitional period.

The UN, the US, and NATO, as well as other international forces, can be made available to safeguard the occupied territories during this transitional period.

While the Trump administration is keen on getting the talks started, it should give serious consideration to a new strategy. Instead of leaving everything to the parties to the conflict that are negotiating on uneven ground, the US should adapt a more creative strategy. Reversing US foreign policy on this issue and beginning with an endgame plan and a timeline would allow everyone involved in the conflict to know where the peace process is going. This would be a much smarter and practicable path for President Trump to follow, if he really wants to oversee the “ultimate deal”. 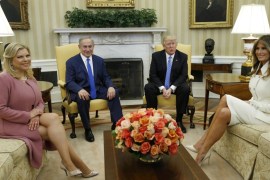