Last month, as Donald Trump danced with Saudi princes and scolded European leaders, the United States Agency for Aid and Development (USAID) released its budgetary request for the 2018 fiscal year. The document, which presents an argument of sorts to American politicians for why it is necessary to commit money for international development, makes for interesting reading.

The very first argument listed by the agency is that the requested money will enable USAID to “help defeat ISIS and other terrorist organizations, threats and networks“. In the short explanation appended, USAID claims that the $2.5bn being requested will permit the agency to “target the root causes of violent extremism, rebuild economic opportunities and good governance”.

It all sounds very good and admittedly it feels harsh to berate the well-intentioned bureaucrats at USAID for their attempt to tie their budgetary requests to what the Trump administration has decided will be its number one goal. What sounds good in intention, however, is rarely good in actuality. So it is with this latest claim, one that belies all existing evidence that pairing bombings with development agendas is wasteful at best and a decrepit example of neo-imperialist deception at worst.

Bombing one corner of a country while doling out development dollars in other parts not only fails to accomplish development goals, it taints development programmes. Women’s education, childhood vaccination, even better roads become associated with selling out and caving in, goodies paid for in the lives of dead fellow citizens.

Examples of this dynamic abound in countries such as Iraq and Afghanistan, the largest recipients of US development aid. In Afghanistan, the site of USAID’s last attempt to defeat terror with development, millions of dollars were wasted when USAID went to war with the Taliban.

In 2015, the agency implemented the Rural Stabilization Programs, aimed at helping the Afghan Government to reach into “unstable” areas and build local governance capacity. “Unstable” here referred to, among other things, areas where there was significant Taliban activity. Following implementation of the programme, an oversight agency was tasked with reviewing whether the USAID programmes had accomplished their goal.

Their report, compiled from data from hundreds of districts, found that stability was actually lower in those villages that had received USAID support. In addition to the fact that the villages that received no aid from USAID were better off in stability, the report also found that there was actually increased support for the Taliban in the areas that had been the recipients of USAID stabilisation funds. The programme, which cost more than $300m, is scheduled to continue until February 2018.

If the language of its budgetary request is any evidence, for USAID development seems only a secondary goal, while alignment with the ISIL-crushing strategic priorities of the Trump administration is a primary one.

The results reveal the truth that most people in conflict zones already know: bombing one portion of the country and providing stabilisation funding to another not only nullifies development goals but actually helps terrorist recruitment. At the core of the issue, however, lies the central question of whether development aid can and should be an instrument of foreign policy and military goals.

Most in the United States, of administrations past and present, not only support such a marriage, they insist that it can be a harmonious one. In their view, the US is committed to a free market economy and to democracy, so it should invest development dollars in creating more societies in its own image.

The premise seems unproblematic in theory, an easy statement of purpose that may very likely be workable. In practice, however, post-9/11 development dollars disbursed by USAID have been accompanied by military interventions. The recipients have received destruction and development in a single package.

This can be seen in the headlines from the same week in which USAID released its budgetary request to Congress. On May 25, only two days after USAID released its budgetary request, a Pentagon investigation found that a US air strike that targeted a building in the Iraqi city of Mosul in March had killed over 100 civilians – the largest number killed in a single incident since 2014.

The US had initially denied that it had undertaken any strikes at all in Mosul. Nothing was said even when locals reported that nearly 200 people had been killed by the bomb.  Two long months had to pass before the Pentagon admitted that the US did in fact strike the building, that the strike took place in a very crowded area of the city and that, yes, a large number of civilians, people already pummelled by the incursion of the Islamic State of Iraq and the Levant (ISIL, also known as ISIS), had died.

The news of the strike and the “accidental” killing of more than a hundred civilians is relevant to the discussion of USAID and aid in general, because it points to exactly the sort of actions the US attempts to cover up with development activity.

The US sees no disconnect between bombing one portion of the country (and inevitably killing civilians) and showering aid projects on another and imagining the pain from lost lives to be thus extinguishable. Receiving populations do not buy this transactional crossing out of pain with projects; they are smart enough to assess the cost of a school or a health clinic or a road in comparison to the lives of countrymen they have lost. It is a grisly calculus and its macabre nature betrays the truth that militarised aid, aid as a function of a super-power’s strategic interests, is in reality a bribe and not aid at all.

To achieve development goals, actual uplift of societies, actual improvement of governance, commitment must be to development first and accomplishment of strategic and other objectives last.  As the example of USAID and the Rural Stabilization Programs in Afghanistan exposes that people, poor and desperate as they may be, know when you are trying to buy their allegiance and most won’t sell it.

USAID does not agree. If the language of its budgetary request is any evidence, for USAID development seems only a secondary goal, while alignment with the ISIL-crushing strategic priorities of the Trump administration is a primary one. Facing a large budgetary cut and a re-organisation that would place it within the US Department of State rather than as an independent agency, USAID bureaucrats have decided to bow before the administration and say what is necessary to save their jobs. The loser in this equation is development itself, a goal that was already becoming marginal because of the post 9/11 militarisation of US development aid and that is now completely abandoned in the rage-filled era of Trump.

Rafia Zakaria is an attorney and author of The Upstairs Wife: An Intimate History of Pakistan; and Veil. 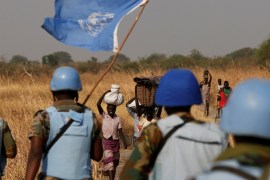 Spokesman says reduction of US contribution to UN could ‘undermine the impact of longer-term reform efforts’. 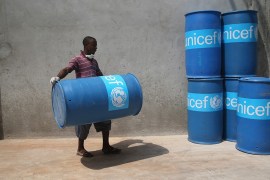 British foreign aid is not to blame for poverty and failed social services in the UK.

Aid and tirade in Pakistan: The back story