India’s Narendra Modi is back in Washington, DC. In India, the prime minister is known for his travels around the world. He is rarely home. No amount of chaos in the country, not even the epidemic of violence against oppressed castes and Muslims by lynch mobs, could keep Mr Modi home. He has more important concerns than the turmoil experienced by his citizens.

Meeting US President Donald Trump is an important sign of being a world leader. Modi’s base – which sees him as a strong man – is enamoured by the idea of their leader sitting with Trump. After all, they are both strong men who have nothing but contempt for weakness. Both easily shrug off domestic chaos. Both leave details to others to care for. They see themselves as visionaries, as a new breed of nationalists who represent the hatred of large sections of their citizenry. It is hate that brought them both to power. It is hate that anchors their agenda.

For nine years – from 2005 to 2014 – Modi was banned from entering the United States. Allegations of his complicity in the 2002 pogroms against Muslims in his home state of Gujarat drew a sharp response from the US government. It decided to deny him a visa, a policy that was overturned when Modi became prime minister.

He visited the US in 2014 and had a private dinner with then US President Barack Obama at the White House. It was full-scale rehabilitation. Modi then returned each year – holding a public meeting at Facebook’s headquarters in 2015 and addressing a joint session of the US Congress in 2016. The current visit is his fourth since he won the Indian general election in 2014.

Both Obama and Trump have been eager to fete Modi. They have recognised that in the current political climate in India, he and his political party – the Bharatiya Janata Party (BJP) – are going to be around for a while and will perhaps win the 2019 elections as well. From the US perspective, Modi has to be engaged, so the allegations of his complicity in the Gujarat riots are irrelevant. Pragmatism means that morality can be set aside.

The politics of hate and the economy of weapons

Not only do Modi and Trump lead movements anchored in hate, but they also appeal to an old-fashioned form of nationalism. Both tell their people that policies are all about getting the best deal possible. And this is where both men will face problems. Despite all the warm words about a new Indo-US arrangement over the past two decades, great divergences exist over actual policies.

What Modi can do for Trump is buy more US weapons.

The pushback against these gifts to US agro-business means that Modi cannot bend further to please the Trump administration’s trade ambitions. Nor would Modi’s Make In India initiative go well with a long-standing US desire to open India’s markets to US retail giants such as Walmart.

Modi would like to do all he can to please the Americans, but he would be met with a million mutinies within his own governing bloc if he does so. Nationalism is a curious device. It can easily give you votes, but it also raises the expectations of your voters.

It is of course a vulgarity that India – where 50 percent of the population lives in deprivation – spends so much of its budget on weapons. But today it is how the government chooses its priorities – ignoring the pressing needs of its population in order to service Western arms dealers.

Nationalism is no enemy to defence spending. Just before Modi’s trip to the US, his government sealed a deal to buy 22 US Predator drones at a price of $2bn. Trump surely liked that. He likes to brag about such deals. That it will be the impoverished Indian population paying for it is irrelevant to both heads of state. How 22 drones will help alleviate poverty is something that no reporter could have asked them at their joint news conference. Such a question would have been too vulgar.

But apart from this arms deal that came before Modi arrived in the US, little else was accomplished during Modi’s visit.

During his meeting with Trump, Modi avoided explaining how his protectionist policies would accommodate balancing the trade deficit between the US and India. Trump, on the other hand, dodged the question on pulling out of the Paris climate agreement, which Modi so adamantly supports.

The two men – pickled in the politics of hate – got to know one another and nothing more.

This is something that Modi and Trump share: empty rhetoric delivered with no care that policies will not follow. Drama is everything. Publicity matters the most.

Vijay Prashad edited Letters to Palestine: Writers Respond to War and Occupation. He is the Chief Editor of LeftWord Books, which published From India to Palestine: Letters in Solidarity, edited by Githa Hariharan, in which he has an essay.

Netanyahu in India: What was swept under the carpet 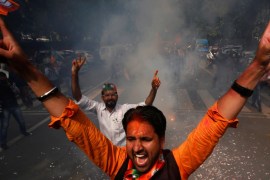 How the BJP has come to dominate lower-caste politics 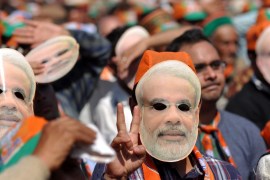