At just 37 years of age, Joyce has seen it all. She’s stared into the abyss of human cruelty and lived to tell the story. In September 2016, soldiers stormed her home in Kajo Keji, South Sudan, which she shared with her husband and their children. They tied her husband’s arms behind his back and stabbed him multiple times until he lay dead.

A single mother with nine children to feed, Joyce decided to run away – to escape the violence in her native land. So she joined the hundreds of thousands of South Sudanese people fleeing southwards to Uganda.

But although the trek to Uganda by foot has reduced her risk of being shot dead or raped by soldiers or rebels, her life is still a painful daily struggle. She still lacks basic supplies, including food, water or shelter.

And she’s not alone, thousands upon thousands of South Sudanese refugees in Uganda – nearly two-thirds of them children – are living in despicable conditions due to a shameful failure by the international community to fund refugee efforts in Uganda, a country that has continued to welcome refugees, despite its limited resources.

The world’s wealthiest countries are not doing enough to support these refugees.

The international community must step up and show its support to Uganda and the refugees it has given a warm welcome. Their lives depend on it.

With more than 900,000 South Sudanese refugees already on its territory, and with thousands more arriving each day, Uganda is facing one of the world’s biggest refugee crises.

Known and praised for its progressive refugee policy, Uganda has kept its doors open to refugees against financial odds, but it is buckling under the pressure and needs global support.

Under this policy, refugees are given pieces of land to live on and farm, and have equal access to basic services as citizens, including healthcare and education. They also have the right to work and own businesses.

The authorities aim for refugees to be self-sufficient within five years – and to no longer have to rely on aid agencies.

And yet the international community has still failed to provide Uganda and its refugees with adequate support. By May 2017, the South Sudan Refugee Response Plan for Uganda was only 15 percent funded. In 2016, it was funded up to 51.4 percent.

Not only does this lack of funding risk the sustainability of Uganda’s progressive refugee policy, it also has a direct and devastating impact on refugees’ lives.

Amnesty International spoke to more than 80 South Sudanese refugees in settlements across four districts of northern Uganda, as part of a recent report, all of whom gave harrowing accounts of the human rights abuses they had fled from, including killings, rape and torture. Some of them, like Joyce, saw their loved ones being killed.

But instead of full support to live in dignity in Uganda, they have been left struggling to cope. Even the most vulnerable, such as trauma victims with urgent mental health needs, have been neglected.

Over 64 percent of the refugees from South Sudan in Uganda are children under the age of 18. Many are at risk and in need of urgent support.

Yet appeals by the Ugandan government, the United Nations and aid agencies have fallen on deaf ears.

But it is not too late.

Donor countries, including the United States, the European Union and its member states, Australia, Canada, China and Japan, have an opportunity to change this tomorrow at the Uganda Solidarity Summit on Refugees in Kampala. The international community must step up and show its support to Uganda and the refugees it has given a warm welcome. Their lives depend on it.

Khairunissa Dhala is a researcher on refugee and migrant rights at Amnesty International. 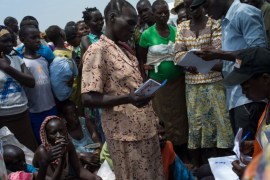 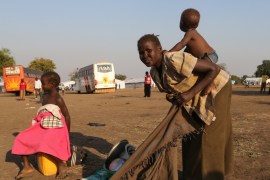 UNHCR appeals to government and rebels to find political solution to crisis as more than 1.5 million flee country.