Having abandoned the Trans-Pacific Partnership and the Paris Accords, Donald Trump has only fed fears of the US’ increasing isolation on the global arena.

Naturally, prognostications are firmly fixated on China and how it might exploit the destruction of the existing consensus regarding US world leadership.

Consider Xi Jinping’s symbolic defence of globalisation at Davos in January: signalling to the world that Beijing is a willing guarantor of economic growth and cooperation, during a phase of intensifying provincialism and anaemic global trade.

In the context of an emergent leadership vacuum, China is aware it cannot challenge US hegemony by simply flexing economic and military muscle. It should come as no surprise then that China’s foreign policy marshalled under Xi reflects the significance of ideas and institutions.

Interestingly, the purpose of soft power is inverted in service of China’s domestic politics. Soft power is more than just a mythologised national culture translated into exportable universal values; it simultaneously involves value production at home and abroad.

In contemplating Xi’s grand strategy then, it is prudent to be in tune with how China assesses international politics in domestic terms.

According to scholar Qin Yaqing, at the heart of Chinese foreign policy is not a security dilemma between great powers, but an “identity dilemma”: Who is China? How does it make sense of the world and its place in it? This identity dilemma is articulated through idealised debates about its “harmonious society” correlated with its “peaceful rise” on the world stage.

This aspiration is audible in Xi’s concerted grand strategy. He has bestowed Chinese foreign policy with a distinctive thrust in coalescing ideas distilled through charming slogans (“China Dream”), institutions (the Asian Infrastructure Investment Bank and the Silk Road Fund), and projects (One Belt One Road) to cultivate an impressive network of political, economic, cultural, and security relations.

OPINION: China’s Silk Road project – A trap or an opportunity?

Xi’s assertive foreign policy – integrating both development and security goals – is a watershed moment in contrast to the Deng Xiaoping era of pragmatism that both Zemin and Jintao observed. Arguably, the tenor of China’s 5th generation leadership can be grasped by an attentiveness to a chorus in diplomatic addresses that have so far defined Xi’s tenure.

At the “Work Forum on Chinese Diplomacy Towards the Periphery“ in 2013, Xi emphasised the “coordination” of a “comprehensive” approach to handling the bureaucratic complexity of foreign policymaking in the face of the CPC’s splintered authority.

Yes, the dollar imbues the US with a structural advantage that won't disappear anytime soon. But in the context of a fracturing neoliberal consensus, it would behove us to take China more seriously as a burgeoning rule-maker.

Xi’s speech explicitly framed foreign policy in service of domestic policy: linking peripheral diplomacy with “realising the China dream” and the “great rejuvenation of the Chinese nation,” which will be fulfilled through the achievement of two centenary goals set by the 18th CPC National Congress in 2012.

In suggesting that China had to build closer security ties within its neighbourhood, he expounded that regional cooperation must evolve beyond mutual benefit to “shared beliefs and norms of conduct for the whole region”.

Parsing such statements reveal how Xi wants to think regarding soft power projection, one that is coterminous with Chinese rejuvenation.

The goal of peripheral diplomacy is not only to augment economic development and shore up political stability, but to provide a notion of regional order: the “community of shared destiny” as Xi called it. Indeed, he concluded his address at the  2014 Conference on Interaction and Confidence Building Measures in Asia by underscoring that China stands “ready to support and help the other peoples in Asia to realise their own great dreams”.

After all, the core principles of Chinese foreign policy – mutual respect, trust, reciprocity, cooperation – does not preclude hierarchy. Noticeably, it is this traditional belief of a regional system with China at the centre that animates Beijing’s peripheral diplomacy drive.

In another speech delivered at the Central Conference on Foreign Affairs in 2014, Xi would reaffirm the importance of the periphery in Beijing’s foreign policy, as well as the necessity of interdependence and global governance.

Regarding grand strategy, a linkage between the domestic realm and the global would be pursued through universalisation of the “China dream”. As Xi asserted, “we should increase China’s soft power, give a good Chinese narrative, and better communicate China’s message to the world.”

What of the “China dream” and support for the “Asian dream”? It is debatable as to whether this slogan embraces the individual, the collective or the nation. If Xi envisions the regional community as an extension of the Chinese nation, then sovereign dreams are palatable insofar as they do not contradict Beijing’s.

The “New Silk Road” is part-and-parcel of this strategic calculus to translate material power into ideological purchase. Driven by geo-economic concerns, “One Belt, One Road” (OBOR) is one such endeavour impregnated with the potential to bring about the realisation of Chinese and Asian dreams through win-win cooperation in the region.

Furthermore, the OBOR initiative is billed in many quarters as a cultural alternative to the US-led liberal order, seeing as Beijing’s continental and maritime strategies will not just link economies but “civilisations”. It highlights the connectivity of hard power with a moral responsibility to modify the global architecture with the interests of the non-West.

All this feeds into Xi’s grand strategy that envisions China as the normative placeholder, as the ensuing hegemon.

The success of Chinese state-managed capitalism coupled with the 2008 financial crisis has invariably called into question the legitimacy of Anglo-Saxon markets and liberal democracy.

If and when the “New Silk Road” initiative is dubbed a success, it would confirm that China is not subordinate but in the driver’s seat, offering the world a superior model of globalisation.

Whether this means China becomes proactive in shaping the global liberal order through an infusion of Chinese characteristics or “Asian values” – as opposed to throwing globalisation out with the institutional bathwater – could take place sooner than we think.

Yes, the dollar imbues the US with a structural advantage that won’t disappear anytime soon. But in the context of a fracturing neoliberal consensus, it would behove us to take China more seriously as a burgeoning rule-maker.

Amar Diwakar is a writer and research consultant with Global Risk Intelligence. He holds an MSc in International Politics from SOAS and blogs at Splintered Eye. Twitter: @indignant_sepoy 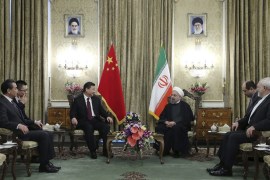 Beijing is no longer content with lurking on the sidelines and is willing to have a say in the Middle East. 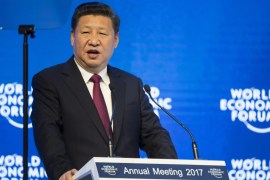