In a few days, Hamas will be marking the third anniversary of the 2014 Israeli war on Gaza, which lasted more than 50 days, causing thousands of Palestinian deaths, and injuries on both sides.

As this memory is being marked, events are heating up in Gaza as human suffering increases and the siege continues. The siege is affecting many aspects of people’s lives including their standard of living, the economy, and concern over debates in Israel about whether or not Gaza will export its internal crisis outside its borders by launching a new war against Israel.

Regardless of the accuracy of this Israeli analysis, there have been a number of recent statements by Hamas officials referring to the unbearable conditions Palestinians are living under and the possibility of an imminent explosion. This opens up debate on the armed resistance against Israel declared by Hamas along a number of axes.

Motives behind the military option

More than 25 years have passed since the launch of the 1991 peace process between the Palestinians and Israelis at the Madrid Conference, and today Hamas does not feel that the Palestinians were able to preserve the meagre concessions and achievements that they secured there. They see the reason for this to be their lack of military strength on the ground, which would have prevented Israel from taking their lands and destroying their institutions and impeding their mission of liberation.

It is likely that alarm bells were ringing for Hamas leadership when the Israeli army constructed a separation wall in the West Bank in 2002 and reoccupied of most of the territories they had withdrawn from during the political negotiations. They were seeing most of the gains achieved by the Palestinian Authority fall and get trampled under the boots of Israeli soldiers who acted with impunity because there was no military deterrent to push them back.

The Israeli withdrawal from the Gaza Strip in 2005 was a golden opportunity for Hamas to rebuild itself militarily by arming itself, increasing its capabilities and redrawing its plans in the absence of an Israeli military presence in Gaza, even though there was a tight land, sea and air blockade imposed by Israel on the Strip.

Hamas' stockpiling of military power does not mean that it is necessarily heading for a fourth military confrontation with Israel.

The withdrawal was followed by three fierce wars by Israel on Hamas in Gaza in 2008, 2012 and 2014. In spite of the human and monetary losses Hamas suffered, there was a marked improvement in its fighting from one war to the next and it was able to overcome many of its weaknesses in the field, learning from the lessons that each of these conflicts brought. This makes Hamas prepared to enter a new confrontation with Israel, whether it instigates it or has it forced upon it, in spite of statements to the contrary that it is not prepared for another fight because of the losses it sustained in previous wars.

Hamas does not hide the fact that the military confrontations with Israel have depleted its resources and have taken a heavy toll, causing the deaths of thousands of its fighters. In spite of that, Hamas is committed to the military option and continues to prepare for it, a fact that raises questions about the reason for this dedication especially in light of the fact that there are voices within Hamas urging a less costly path.

Hamas sees that the balance of power between it and Israel is tilted in favour of the latter and it may not be logical to compete with them in a purely operational sense. However, for Hamas, accepting this hypothesis as fact would encourage Israel to invade Gaza periodically and grab its lands with impunity at any time, as it does in the West Bank.

That is why the movement is continuing to stockpile its military capabilities as far as its resources will allow, turning Gaza into a fortress that Israel would have difficulty breaching. Hamas has turned Gaza into its de facto centre of authority and does not want to be compelled to hand it to Israel because of an imbalance of power, so it is in a race against the clock to increase what capabilities it has.

This effort exerted by Hamas to build its military capabilities to face Israel has led it to the point where it now controls what can be termed a regular army. This army is based on the Qassam Brigades and comprises 27,000 troops, according to Israeli estimates. These are distributed among six regional divisions, 25 battalions, 106 companies, and 2500 fighters in an elite unit, approximately one-third of whom are trained and prepared to carry out operations inside Israel.

In order to build these capabilities, Hamas is spending generously on what it sees as its backbone, which will enable it to repel an Israeli attack and preserve its authority in Gaza. It fully expects to continue this effort in the coming days in spite of Israeli objections and its attempts to turn international opinion against the movement.

These attempts were made abundantly clear a few days ago when the US envoy to the UN, Nikki Haley, visited one of the Gaza tunnels on the southern border of Israel and classified it as something that was constructed to kidnap and kill Israelis.

As it announced in its new charter in May this year, Hamas may not object to a new framework for its relations with Israel, such as negotiating a long-term ceasefire that could last a number of years or even become permanent.

Hamas fears that it will be pushed into a critical corner by Israel, where Israel will then be able to impose more and more conditions on Hamas until it becomes a paper tiger that is easy to pounce on.

At the same time, Hamas has been expressing rising doubts about the real motive behind reaching a long-term (possibly multi-year) ceasefire with Israel in light of Israeli insistence that such a ceasefire should include stripping Hamas of its weapons and transforming Gaza into a demilitarised zone.

Hamas sees this condition as a stick in the wheel of any negotiations with Israel through regional or international mediators, because it sees its military capabilities as the last deterrent it has. We would not be revealing any deep secrets if we were to say that Hamas has in fact rejected offers sent to it via various parties sent by Israel. They came with offers to relieve the siege on Gaza or remove it entirely, on the condition that the movement stop its efforts to arm itself. These offers were rejected outright.

Hamas fears that it will be pushed into a critical corner by Israel, where Israel will then be able to impose more and more conditions on Hamas until it becomes a paper tiger that is easy to pounce on. This would be a nightmare scenario for Hamas who do not want to permit a repeat of what happened in the mid-1990s when their military capabilities were decimated by repeated strikes from the Palestinian Authority, which took control of the entirety of Palestinian military action. Hamas is determined that history will not repeat itself.

Finally, the past years have seen the arrival of a number of international, security, and UN envoys in Gaza to negotiate with Hamas over its weapons in return for integrating it into the political process, lifting the “terrorist” designation that was attached to it and resuming financial support to the Gaza Strip.

However, Hamas did not even give these offers the chance to be discussed within its political and organisational structure. Perhaps this was because it was convinced that the offers were a trap it was afraid to fall into, so it insisted on its position in spite of what that cost it in terms of international isolation and regional siege.

Nonetheless, Hamas’ stockpiling of military power does not mean that it is necessarily heading for a fourth military confrontation with Israel. Rather it is working to reach a state of constant readiness in fear that Israel will strike it first in a surprise attack, and that is something the movement should be very wary of.

Perhaps Hamas has learned well, or should learn, that it is difficult for Israel to accept an armed entity on its borders, an entity that proclaims day and night that it intends to destroy it. This opens up the field to many speculations, from the outbreak of a fierce new war the likes of which has never been seen before, to a possible tightening of the siege on Gaza, spelling a slow painful death for its residents that Hamas would not be able to withstand for long, or the third option of a prolonged pause in hostilities, an option that lacks many of the circumstances it would need in order to succeed.

Dr Adnan Abu Amer is the head of the Political Science Department at the University of the Ummah in Gaza. He is a part-time researcher at a number of Palestinian and Arab research centres and he periodically writes for Al Jazeera, the New Arabic and the Monitor. He wrote more than twenty books on the Arab-Israeli conflict, the Palestinian resistance and Hamas. 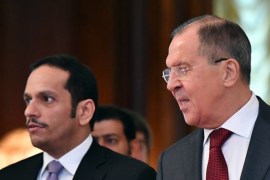 Qatari FM: For Arabs, Hamas is a resistance movement

Foreign interference in the Palestinian elections