“Strong and stable, strong and stable.” Hate-peddling Tory spin doctor Lynton Crosby has his clients mindlessly repeating this mantra ad infinitum. But beneath the soundbites, the public are beginning to see a party of chaos – one that attempts to U-turn on key manifesto pledges and avoids scrutiny at all costs. Where Labour offers hope, the Conservatives serve up an array of regressive policies and pledges that will protect vested interests. Cries that Labour poses a threat to the country are a lie. A Tory landslide would be a disaster for the UK.

You only need look at recent history to see their incompetence in action. After most countries have abandoned austerity, the Conservatives pushed ahead with what was widely regarded as an illogical economic programme. Sticking to this path was, the economist Paul Krugman says, “a very British delusion”. It’s had deleterious effects. Only the very wealthy are doing well out of the current system; in the past year, the richest 1,000 people luxuriated in a 14 per cent jump in their wealth, while wages fell.

But in the face of rapidly rising in-work poverty, a National Health Service (NHS) starved of funds, crumbling state schools and a cruel welfare system, more austerity is all the Tories offer.

Their education plans are evidence of that. They claim they’ll increase schools’ budgets by £4bn ($5.1bn) by 2022. But the Institute for Fiscal Studies has shown that, when taking into account growing pupil numbers and recent reductions in budgets, this amounts to a real-terms cut to spending per pupil by a huge 7 per cent between 2015-16 and 2021-22.

OPINION: May’s demagogic streak and the hypocrisy of the media

Slashing budgets will have a disastrous effect on children up and down the country. Some will be forced to clean classrooms, others will get a second-rate education in overcrowded classrooms as heads are forced to cut back on teacher numbers. And many more children will be malnourished under their plans.

To distract from their failings and duplicity, the Tories turn people against each other through an age-old tactic: demonising migrants.

The Conservatives will take away free school meals and introduce pitiful 7p breakfasts, leaving children who come from homes where parents can’t afford to put food on the table to go hungry. Where Labour would increase corporation tax to funnel much-needed money into public services, a Conservative government would tell people they simply can’t afford to fund schools as the super-rich watch their bank balances multiply.

It’s not just the young who will lose out. After axing the social care budget by £4.6bn ($5.9bn) between 2010 and 2015, old people will be forced to look after themselves through the dementia tax as our elderly population grows. The Conservatives claim this will deal with generational inequality but they’ve offered nothing for younger generations who’ve seen their pay packets dwindle in size as house prices soar.

Conservatives’ strategy is to give with one hand after taking away with two. The “a” word might have dropped out of the Tory lexicon but they’re still going to cut public services to the bone, even in the face of overwhelming evidence that it’s making the country poorer and more unequal.

That’s because their economic programme was always ideological. As Professor Ha Joon Chang has pointed out, economics is not a science, it’s political. Despite what we’ve been told about “scroungers” and “strivers” in recent years, people aren’t forced to use food banks because of chance, laziness or, as Theresa May put it, “complex reasons”. The Conservatives made a political choice: people on low incomes, the middle classes and our public sector would pay the price for their ideologically driven efforts to shrink the state.

OPINION: Is Brexit Britain suffering from an imperial hangover?

Instead they prioritise the interests of the rich. The Tories will reintroduce the brutal blood sport of fox-hunting, if it made it through a free vote in the Commons; legalise the ivory trade, which sees around 20,000 elephants killed each year on the African continent (an elephant slaughtered every 25 minutes); and put the needs of their donors in the fossil fuel industry ahead of the environment, as ice caps melt at an alarming rate and sea levels steadily rise.

To distract from their failings and duplicity, the Tories turn people against each other through an age-old tactic: demonising migrants. May has more to say on health tourism – a fabricated issue that belies a reality where migrant staff keep the health service going – than funding the NHS. The raft of anti-migrant policies in the Conservative manifesto will further create a “hostile environment” for immigrants. This has very real effects. Just ask 17-year-old Reker Ahmed, who was beaten within an inch of his life for simply being an asylum seeker.

In fact, the Tories’ migration policy is a mess by their own standards. If they go ahead with their plans to slash net migration down to tens of thousands a year, they will tank the economy. Their Brexit promises will fall into oblivion. Countries with huge economies like India aren’t particularly interested in doing a trade deal with a government that boasts about “bear[ing] down on immigration from outside the European Union”.

OPINION: Doner kebab and integration in the UK – A story worth telling

This is of little concern to a party who have plans to change the rules so they can stay in office. While her opponent Jeremy Corbyn has toured the country talking to voters during the election, May has moved from one stage-managed performance to another. Her response to a decline in political engagement over the past few decades has been to grip tight on to the levers of power. This stranglehold on democracy will only tighten if she sweeps to power on June 8. She’ll introduce GOP-style voter ID laws, which will disenfranchise about 3.5 million people, most of whom will be on low pay (and less likely to vote Conservative). This amounts to rigging the system to make it easier for them to win.

From a £10 ($13) hourly minimum wage to ruling out tax rises for 95 per cent of the population, Labour is offering positive change in a country that’s crying out for a political party to take on the status quo. The alternative is a Conservative government that would impoverish older people, plunge more children into poverty, ignore climate change and kill foxes – that’s the real threat to the UK. 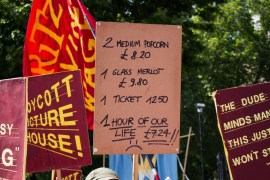 The fight for a living wage in the UK

Cinema workers are leading the campaign for a living wage as they say low salaries leave them living “precarious” lives.