There is renewed optimism in Nigeria over the success chances of President Muhammadu Buhari’s war against corruption. Perennially derided by the opposition as a one-way partisan campaign, Buhari’s war against graft is finally piquing the interest of neutrals. This is because the president’s own men are the latest victims of the campaign.

Director general of Nigeria’s National Intelligence Agency (NIA), Ayodele Oke, is currently on suspension after reluctantly admitting ownership, on behalf of the agency he has been leading, of the sums of $43.4m, 27,700 British pounds ($36,000) and 23.2 million naira ($74,000) found by the Economic and Financial Crimes Commission (EFCC) at a private residence in Lagos. Oke may have been appointed to his role by ex-president Goodluck Jonathan in 2013, but he is by every stretch a “Buhari man” having been left in office when other service chiefs were replaced in 2015. It is inexcusable that he warehoused a combined 13 billion naira ($41.3m) “for covert operations” without the president’s knowledge.

According to the report of a probe by the senate, Rholavision Engineering Ltd, a company owned by Lawal, received 20 payments of 10 million naira ($32,000) from Josmos Technologies, a company that won a 248.9 million naira ($791,000) contract from an agency headed by Lawal to remove “invasive plant species” in the northeast.

Lawal’s suspension was so surprising – given Buhari’s five-month hesitation to act – that the chairman of the senate committee which indicted Lawal, Shehu Sani, said “a mighty mortal” had been caught in the trap of his fate.

However, the source of the newfound optimism about Buhari’s anti-corruption campaign is the exact reason why it will not go beyond recovering just a fraction of the money looted by previous governments. When Buhari’s tenure is over, there will hardly be any convictions for past offenders and institutional barricades against corruption will still not be in place.

A government against itself

It has recently been revealed that Oke’s NIA, the foreign intelligence component of Nigeria’s three-pronged security apparatus, collected $289,202,382 in cash from the account of the National Petroleum Investment Management Services (NAPIMS) in February 2015 – after the postponement of the general election and just three months before Goodluck Jonathan left office.

It will be extremely difficult to make sense of the current anti-corruption crusade without looking into the tenure of Jonathan, under whose watch an endless string of financial atrocities was committed.

Meanwhile, NAPIMS, a corporate services unit in the exploration and production directorate of the Nigerian National Petroleum Corporation (NNPC), was established to manage government’s investment in the upstream sector of the Nigerian oil and gas industry. By both its mission and vision, NAPIMS has no business funding NIA’s “covert operations”.

This revelation makes it clear that Buhari cannot count on the agencies of government to help him fight corruption. NIA and NAPIMS are the latest to let him down; were EFCC to conduct a probe of the accounts of a dozen other agencies, the extent of filth to be discovered would surely be sickening.

When exposed, the operations of secret intelligence agencies often stun the public. But while the subject of discussion after such operations in the West is usually the propriety of operational methods, mismanagement of funds is usually the case in Nigeria.

One example, the Central Intelligence Agency (CIA) – the US agency that Nigerian former dictator Ibrahim Babangida was attempting to replicate when he established NIA in 1986.

As of March 2017, WikiLeaks had published more than 8,000 confidential documents from the CIA. But they all relate to CIA’s software capabilities, such as the ability to compromise cars, smart TVs, web browsers, and the operating systems of smartphones and computers.

Notably, in July 2014, CIA Director John Brennan was forced to apologise to lawmakers because five CIA employees had surreptitiously searched Senate Intelligence Committee files and reviewed some committee staff members’ email on computers that were supposed to be exclusively for congressional investigators. Matters of professional ethics are what intelligence agencies get enmeshed in – save, of course, we’re talking about Nigeria.

It will be extremely difficult to make sense of the current anti-corruption crusade without looking into the tenure of Jonathan, under whose watch an endless string of financial atrocities was committed. Oke had Jonathan’s nod on the $289m he collected in 2015, and he is said to have controlled “a reasonable amount of Jonathan’s campaign funds“. Jonathan also authorised the collection of $2.1bn for the procurement of arms for counterterrorism operations – believed to have been mismanaged, and for which Sambo Dasuki, Jonathan’s security adviser, is being held in detention.

But Nigeria is not, for example, Portugal – where Jose Socrates, prime minister for the seven years leading to 2011, was imprisoned in 2014 (released in late 2015 but then placed on house arrest) for alleged corruption, money laundering and tax fraud.

Try that with Jonathan and Nigeria risks an extended economic recession, as the resultant uproar from militants will upset crude oil earnings and undermine Nigeria’s gains from OPEC’s landmark output cuts.

There are no straightforward choices in sight for Buhari. The probe committee he constituted initially planned to invite Jonathan but subsequently shelved it. How do you probe a messenger but ignore the master? Still, how do you recover stolen loot knowing the price to pay is injury to an oil-dependent mono-economy? The answers are neither yes or no, and that is why Buhari’s anti-corruption war will eventually yield a betwixt-and-between result: so much action, minimal solution. 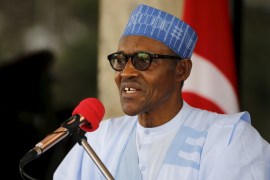 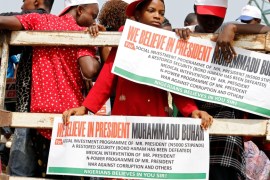