As of January 1 of this year, Poland has become the European front line in the war on the environment, and, particularly, on plant life. On that day, the so-called Szyszko’s Law, named after Polish Minister of Environment Jan Szyszko, came into effect. According to the provisions of this law, owners need not inform the authorities if they plan to cut down trees growing on their privately held lands, nor are they required to do any replanting to offset tree felling.

The new provisions have been subject to heated contestation and protest both from the European Union and from diverse groups within Polish civil society. Most emblematically, a group of women under the leadership of Cecylia Malik took the initiative to create Mothers on Tree Stumps, whose members breastfeed their children while sitting on recently felled trees. The photographs of their collective actions are posted on social media and show a near-apocalyptic atmosphere with stark contrast between infants, representing hope for the future, and the scenes of devastation unfolding around them.

Yet it seems that Szyszko’s law has not entirely satisfied the forestry industry in Poland. Currently, the state itself is engaged in a massive logging programme at the Unesco-protected Bialowieza ecosystem, considered to be Europe’s last primaeval forest. Nearly 10,000 acres of Bialowieza is earmarked for logging. Here, too, protests have abounded; earlier this month, hundreds of writers and artists sent an open letter to the Polish authorities imploring them to stop the assault on Bialowieza.

Protecting the forest by chopping it down

What jumps out at us as we take a closer look at official explanations for the government’s decision to log a primaeval forest is how they reproduce the self-contradictions apparent in the discussion of security and its relation to basic rights. In the name of security, citizens in Western democracies are asked to give up their privacy but, upon doing so, become less, rather than more, secure. And, in the name of the health of the forest, Polish people are urged to let go of that very forest.

When it comes to energy and plant life, the ideological epoch and the era of post-truth are in absolute agreement insofar as they are ready to sacrifice the long-term wellbeing of ecosystems and the entire planet for short-term pragmatic concerns.

Last year, Jadwiga Wisniewska, a member of the European Parliament from the ruling Law and Justice (PiS) party stated: “We want to save the forest from its false defenders, who would allow the forest to rot away before our eyes”.

How is it that the forest is saved through a massive logging program? According to the Polish government, these drastic measures are in order to stem out a bark beetle outbreak, as well as to “ensure safety” for the roughly 120,000 tourists visiting the forest annually.

Let us put aside for a moment the environmental objections to a plan that is likely to invite more severe beetle outbreaks in whatever remains of Bialowieza and that ignores the capacities of a 9,000-year-old forest to fight infestations and to regenerate itself.

Does the rhetoric of those in power in Poland not reiterate the long-standing mantra of the sacrifices to be accepted for our own good? “To protect the forest, we need to chop it down” translates seamlessly into “To protect our democracy, it is imperative to give up basic democratic rights”. Political management reverberates, as though in an echo chamber, with forest management.

The era of post-truth

The stress on public safety is the tip of the iceberg in the analogies between the control and administration of human and natural resources, well beyond the scope of the economic sphere where these terms tend to circulate. The Polish government, like Donald Trump in the US, is spearheading the politics of post-truth, which, in both cases (and despite undeniable differences in national contexts and fine-grained details) boils down to one and the same thing. In their discourse and practices alike, the two regimes have given up on minimal consistency and common sense, previously supplied by ideological means. Post-truth is, at its core, a post-ideology of barefaced lies that needn’t bother hide the collusion and, at times, the merging of political and economic powers. Just as Trump’s conflicts of interest are rife, so some have accused Szyszko – a former park warden and professor of forestry – of being “too close to the logging industry”.

IN PICTURES: Fighting to save the last of Canada’s giant trees

When Wisniewska spoke out against “allowing the forest to rot away,” she ignored the cycles of growth and decay, crucial to forest regeneration and sustainability. Even if those trees that are affected by the bark beetle outbreak are now deadwood, their rotting away is essential to the future life of the forest. As early American environmentalist Aldo Leopold was fond of emphasising, what might appear useless to us is absolutely non-negotiable for an ecosystem, or, in his words, “for the health of the land”.

Far from a personal oversight, Wisniewska’s statement encapsulates the position of the Polish government. Szyszko himself has noted that “more than 4 million cubic meters of wood are rotting, depreciating, species are dying, habitats are lost. Meanwhile, the local population has nothing to heat their homes with, and must import dirty coal from Belarus”. Nonetheless, vegetal rot is not depreciation but appreciation, an enrichment of the soil, welcoming the growth to come. With environmental logic out of the picture, we are left with a choice that is no choice, one where both alternatives are unacceptable: to burn “dirty coal from Belarus” or the presumably infested Polish wood, petrified plants that died millions of years ago or those that perished yesterday, whether due to a bug infestation or a buzzing chainsaw.

When it comes to energy and plant life, the ideological epoch and the era of post-truth are in agreement insofar as they are ready to sacrifice the long-term wellbeing of ecosystems and the entire planet for short-term pragmatic concerns. The disjunction between the short and the long terms shows that we do not (yet) know what is for our own good, let alone who or what this “we” is in the interweaving of human existence with the living fabric of the environment.

A similar opacity haunts us as we face the equally fake choice between security and fundamental rights. Opting for either possibility, we lose not the forest for the trees but the forest and the trees. The Polish case is only an extreme literalisation of this dilemma.

Michael Marder is Ikerbasque research professor of philosophy at the University of the Basque Country (UPV-EHU) in Spain and professor-at-large at the Humanities Institute, Diego Portales University (UDP), in Chile. His latest book is Energy Dreams: Of Actuality (2017). 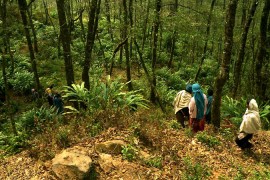 In Nepal, government owned forests are being felled at record speed, while community managed ones are thriving.

Syriza’s victory and the question of Europe