There have been few decisions by the British government this century as damaging as those that laid the groundwork for the Manchester bombings. No, you cannot boil the causes of this “terrorist” attack down to one single “cause”. Yes, Salman Abedi was an “evil loser”, as Donald Trump put it with rare accuracy. Yes, it is unforgivable that Salman Abedi chose to target children.

Yet what was in the British government’s clear purview was to limit the possibility of Abedi being radicalised; to prevent a young man travelling abroad as a “foreign fighter” alongside a group that had previously been proscribed as a terrorist organisation. It is there that the British government failed.

This is not only about former Prime Minister David Cameron’s decision to partake in removing Colonel Muammar al-Gaddafi in 2011, egged on by neoconservatives in his cabinet, nor the subsequent creation of a failed state which has as much to do with Libyan failures as it does Britain’s “fire-and-forget” foreign policy. It was also about the methods British security services were prepared to use to depose Gaddafi, the lengths they would go to, and the risks they would take.

All this should put an above-average level of scrutiny on the conduct of the security services. MI6 appear to have funnelled foreign fighters with suspected links to al-Qaeda from the streets of Britain to Libya. Salman Abedi and members of his close family, who are now arrested, were among these people. Abedi would go on, it is alleged, to join the Islamic State of Iraq and the Levant (ISIL, also known as ISIS).

During Gaddafi’s reign, Britain’s foreign intelligence agency, MI6, sponsored a group of mujahideen who had recently fought in Afghanistan against the Soviets. They were to assassinate Gaddafi himself. The Libyan Islamic Fighting Group (LIFG) was allegedly given $160,000 for a failed assassination attempt in February 1996, in which several bodyguards were killed. MI6 had strange bedfellows while they propped up the group – Osama bin Laden was also reportedly financing the group at the time.

The British people are wiser than the elites that rule over them, who remain a deluded minority who still think sending teenage foreign fighters abroad, or toppling Gaddafi, was ever good for Britain.

When the so-called “war on terror” began, however, the LIFG was swiftly proscribed. The fact that they denied any formal alliance with Osama bin Laden was irrelevant to British authorities. In 2004 MI6 arranged for an exiled LIFG leader, Abdel Hakim Belhaj, to be transferred into Gaddafi’s torture dungeons, with Mark Allen, the head of MI6’s counterterrorism unit, saying, “This was the least [the UK] could do for you and for Libya to demonstrate the remarkable relationship we have built in recent years”.

In 2011, however, following the Arab Spring, the LIFG was suddenly back inside the British tent.

Before the Arab Spring, some Libyan exiles in Manchester, the city that hosts the UK’s largest Libyan community, were believed to be linked to the LIFG. Due to the group’s proscribed status and alleged links to al-Qaeda, these exiles’ movements were severely restricted by the UK authorities, including passport confiscations.

But the situation was reversed once Libyan regime change was in motion. Passports were returned. Intelligence officers are even said to have “sorted” exit for these exiles, so long as they were prepared to fight, produce propaganda or otherwise assist in removing Gaddafi.

As a result, numerous Libyan exiles in Britain and Brits of Libyan extraction went abroad – many who were brave and had good intentions. Among these is said to have been Salman Abedi, who was only sixteen at the time, and his father, who was a member of the LIFG and had sought refuge in Britain in the nineties.

Some Libyans say Salman Abedi would not have been allowed to join the fighting because of his age, but because the British government appear to have allowed such a young and impressionable man to travel to Libya with his father, who had been a prominent member of the LIFG, obvious questions have to be asked about the wisdom of this policy.

READ MORE: Corbyn: We have to admit ‘war on terror‘ is not working

The overall decision to topple Gaddafi in 2011 is one matter – the way in which it was done is another.

It remains official government policy to topple Bashar al-Assad in Syria. Yet foreign fighters are forbidden from travelling to Syria from the UK, precisely because the British government fears they may join extreme Islamist groups, and one-day return to the UK to bomb, stab or otherwise attack British civilians.

But for Libya, British authorities applied an entirely different policy it seems, and actively encouraged people like Abedi to go abroad. Three quarters of all foreign fighters in Libya came from Manchester. Now that one of their number has returned to bomb the same city, apparently under the influence of ISIL, remarkably few are questioning the British foreign policy decisions David Cameron took while in power.

The exception to this is opposition leader Jeremy Corbyn, who gave a truly landmark speech this week in which he said: “The blame is with the terrorists, but if we are to protect our people we must be honest about what threatens our security.”

Corbyn was then lampooned by most of the press who misreported his comments by saying he had apportioned blame to Britain. Instead, he had simply pointed out that the “war on terror“ was a failed strategy. Home Secretary Amber Rudd still countered it was “outrageous” for Corbyn to make such a statement, while the Defence Secretary, Michael Fallon, said Corbyn was “wrong to link foreign policy to terror”.

Thankfully, the British people are wiser than the elites that rule over them, who remain a deluded minority who still think sending teenage foreign fighters abroad, or toppling Gaddafi, was ever good for Britain. 66 percent of the population however, according to pollsters YouGov, agreed that “wars the UK has supported or fought are in part responsible for terror attacks against the UK”. When will the elites start listening to them? They did with Brexit – perhaps Middle East policy should be next. 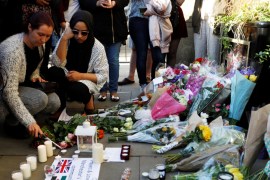 How to protect ‘soft targets’ after Manchester bombing?