My name is Feyisa Lilesa. I am an exiled marathon runner from Ethiopia.

I have not been back to my country since winning a silver medal at the Rio Olympic Games last August. In Rio, as I approached the finish line, I crossed my wrists above my head in solidarity with the men, women and children who have died fighting for their rights and those who are still suffering under the brutal regime in Ethiopia.

It was a sign of nonviolent resistance used by protesters in my native Oromia region, the largest of Ethiopia’s nine ethnic-based states.

Much has changed since my Olympic protest in Rio. I now live and train in exile in the United States. Last February, I was reunited with my wife and two children.

Meanwhile, despite the global spotlight my protest attracted, the killings, imprisonment and harassment of my people by Ethiopian security forces have only worsened.

This is why I continue to protest, after every race and at every media event.

In a few days, the World Health Organization (WHO) member states will elect a new director general at the 70th World Health Assembly. One of the top three candidates is Tedros Adhanom, current special adviser to the Ethiopian prime minister and Ethiopia’s former foreign and health minister. Adhanom is travelling the world discussing human rights (while comically admitting Ethiopia’s record is “not perfect“) as part of his campaign to lead WHO.

Adhanom is one of the chief architects of Ethiopia’s repressive regime. He has been a cabinet minister for more than a decade. In 2015 and 2016, according to human rights organisations, security forces killed hundreds of peaceful protesters; the number in my opinion might be more than 1,000. Adhanom, then the country’s foreign minister, downplayed the extent of the problem and denounced even the scant international scrutiny of Ethiopia’s human rights record.

In an op-ed last October, Adhanom targeted Human Rights Watch – blaming the New York-based nonprofit and the Ethiopian diaspora for whipping up anti-government protests. Having systematically decimated domestic opposition, the civil society and independent press, his regime was attempting to intimidate and silence critics abroad. Like the government he served, which spends millions of dollars on lobbying to shore up international support, Adhanom has turned to PR agencies to whitewash his image.

Adhanom is now travelling around the world hypocritically talking about health as a human right. But when he was health minister, his office refused to acknowledge large cholera outbreaks which cost many lives. Today Ethiopia is also covering up yet another cholera outbreak, using the euphemism of acute watery diarrhoea.

Adhanom has also been touting his success with Ethiopia’s national Health Extension Program. I have friends who worked as extension workers and know communities that were supposed to benefit from this much-hyped initiative. Particularly in Oromo areas, the services never reached the people who needed them the most.

In some towns, poorly supplied health centres were built and extension workers with 10th grade education – who had only a year of medical training – were assigned to staff the facilities.

However, the poor training, the distance the workers had to travel to get to the satellite offices and the lack of medical equipment and supplies meant the majority still don’t have access to quality health services. Moreover, admission into the programme requires party membership and mandatory political indoctrination.

In other words, Adhanom’s health ministry used the donor-funded health extension programme as a coercive political recruitment tool for the ruling Ethiopian People’s Revolutionary Democratic Front (EPRDF). In some cases, people were denied access or were asked to join EPRDF in order to access even the measly services provided by extension workers.

That is not all. Ethiopia has gained international praise for reaching the United Nations Millennium Development Goals. However, in Oromia today, babies often still die in great numbers from preventable diseases such as diarrhoea. The true child mortality rate is never recorded since the statistics are falsified with the aim of meeting global development goals and keeping foreign aid coming. This practice has so far escaped international scrutiny given the lack of independent press, organised opposition and robust civil society in Ethiopia.

After years of authoritarian backsliding, Ethiopia is now effectively a military state, ruled by a Command Post that was set up to oversee the country’s now eight-month-long state of emergency, declared in October.

Despite these crimes, there is still an opportunity for Adhanom and the Ethiopian regime to do the right thing.

First, the martial law must be immediately lifted and protesters, journalists, opposition leaders and civil society members must be released from jail. Specifically, Oromo opposition leaders Bekele Gerba, Merera Gudina and their colleagues must be released without further delay. Authorities must also allow independent investigation, including by UN special rapporteurs on torture and assembly, into human rights violations and the killings of protesters.

Second, instead of blaming the diaspora and neighbouring countries for the deepening political crisis, authorities must meet the protesters’ demands for a free and fair Ethiopia. That entails opening up the political environment and allowing the country’s 100 million citizens to elect their leaders – ending the hegemony of Adhanom’s Tigrayan ethnic group.

Finally, Adhanom – still a special adviser to the Ethiopian prime minister – must withdraw from the election for director general of the WHO and issue a formal apology to the Ethiopian people, the African Union and human rights groups for trying to divert attention from the crimes he and his government have committed over the past two and a half decades.

International civil society groups, the media and WHO member states face a unique opportunity to send a clear message that human rights matter. And perpetrators and enablers of atrocious crimes cannot be rewarded for their complacency in the face of egregious rights abuses. Member states must reject Adhanom’s candidacy and demand that Ethiopia stops covering up water-borne diseases and be transparent about its record of child mortality and other key indicators.

I look forward to one day returning home to run across the blood-red soil of my homeland. However, until the Oromo people gain their freedom, I will continue to protest in solidarity.

Feyisa Lilesa is a long-distance runner from Ethiopia and a member of the Oromo people. 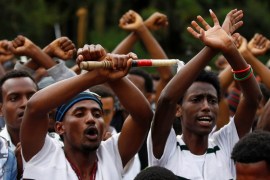 The Oromo protests have changed Ethiopia

The struggle of the Oromo people has finally come to the attention of the global public conscience. 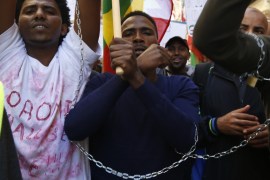