Let’s play a game. Who said it, Recep Tayyip Erdogan or Theresa May?

We’ll start with an easy one: “[We are] not a country you can pull and push around.”

Yes, that’s the Turkish president, ahead of last month’s constitutional referendum which increased his control of state power.

“If Europe continues this way Europe will be damaged by this.”

How about this one: “Threats have been issued by European politicians and officials … All of these acts have been deliberately timed to affect the (election) result.”

A bit of menace. Touch of paranoia. Sounds like Erdogan?

Close but no, that’s Theresa May, in London earlier this month after details of a disastrous dinner with European Commission president Jean-Claude Juncker were leaked to the press.

In the same speech, May called on voters to “give me your backing to fight for Britain”.

In the British media, it is increasingly said, with good reason, that Turkey is on the path to autocracy. But much less commented upon is the relatively new prime minister’s emerging demagogic streak.

Take May’s announcement last month of a snap UK general election on June 8. Politically, the move made sense. The Tories are far more popular than a disorganised and disorderly Labour opposition.

Earlier this month, the Conservatives won sweeping victories in local elections. The general election is almost guaranteed to produce a sizeable victory for May, and a proxy endorsement of her Brexit leadership.

If the departure from the EU does work out, May will claim credit as the leader who delivered. If it fails, and the UK crashes out without any deal, then the prime minister can present herself as the last guardian of interests of the British people.

So how does the prime minister explain her decision to go to the polls early? As a necessary opportunity to crush political dissent. “At this moment of enormous national significance,” she declared, “there should be unity here at Westminster, but instead there is division.”

Leaving aside that opposition – division – is a sine qua non of parliamentary democracy, the reaction to May’s comments in significant sections of the British press was striking. Such rhetoric coming from Turkey – or just about anywhere else – would have been decried as autocratic. Instead, the following day’s Daily Mail splashed with a full-page photograph of Theresa May’s face and the imploration to “crush the saboteurs”. Late last year, high court judges who ruled that the British parliament would have to vote on the start of the process of leaving the European Union were branded “enemies of the people”.

The response to May’s accusation that European leaders are seeking to meddle in the UK general election was similarly tendentious. While some broadsheet newspapers criticised the intemperate language, much of the coverage depicted the British prime minister as Churchillian, a strong woman standing up to overbearing Brussels mandarins.

So far May’s pitch is proving remarkably successful at home. Having created the most serious peacetime crisis in modern UK history – Brexit – May is presenting hers as the only party capable of guiding the ship of state off the rocks. The British public overwhelmingly agree, apparently.

And yet, despite enjoying huge opinion poll leads, May seems petrified of engaging with voters, particularly those who have concerns about a Brexit process that appears increasingly chaotic and half-cocked.

Continuation of the Manichean rhetoric

The Tory general election campaign has been stage-managed to the point of control freakery. Earlier this month, the prime minister’s team barred journalists from a factory visit in Cornwall. Before that, Conservatives were accused of filling an event in Leeds with party members rather than local people. Coming from a leader who said she was “too busy meeting voters” to participate in a televised pre-election debate, this all feels rather curious.

Some blame May’s backroom staff for the highly controlled campaign. The Tories have brought back Lynton Crosby, the Australian spin doctor who ran David Cameron’s successful general election campaign in 2015. But the overall approach is very much in keeping with the prime minister herself.

The eerily autocratic catchphrase “strong and stable government” has been May’s mantra – literally. The phrase been repeated so often by the prime minister and her party that the Tory leader struggled for words when asked by a BBC anchor to speak without soundbites.

May is tapping into a rising time of nationalism, particularly in the wake of the Brexit vote. The British electorate is far from satisfied – as Brexit attested – but there is a yearning for a government that will realise the promises made last summer. May, effectively, is presenting herself as the only politician who can make Britain great again.

But in playing to the gallery at home, May pushes the European Union further away. She has depicted herself as the “bloody difficult woman” the EU negotiators will live to fear, but the UK’s bargaining position is very weak. The prime minister and her team have shown little evidence of the kind of creative thinking that will be needed to forge a deal that can avoid seriously damaging the British economy.

The prime minister is a product of a very particular strain of English exceptionalism. Born in 1956, the daughter of a vicar in southern England, May cleaves to the notion of Britain as a global power, a nation that can still boldly go it alone in the world. It is a sepia-tinged vision shared by much of the British political and media elites.

That belief in British self-sufficiency makes the UK both poorly suited to negotiate a process as complex as Brexit and particularly ripe for demagogic leadership.

If the departure from the EU does work out, May will claim credit as the leader who delivered. If it fails, and the UK crashes out without any deal, then the prime minister can present herself as the last guardian of interests of the British people. Either way, the Manichean rhetoric – of good versus evil, of us versus them – is likely to continue. Britain’s right-wing press will be delighted.

Peter Geoghegan is an Irish writer and broadcaster based in Glasgow. His most recent book is The People’s Referendum: Why Scotland Will Never Be the Same Again.

Britain needs its own Mueller investigation 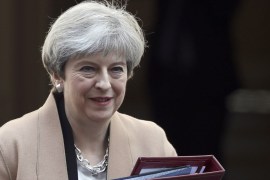 British PM says ‘threats’ have been made against the UK, as the EU unveils its negotiating stance on Brexit talks. 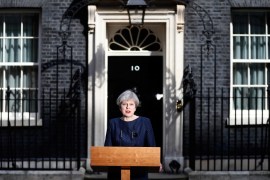 Theresa May will go to parliament on Wednesday and seek early election to stop ‘political game-playing’ ahead of Brexit.