Too many so-called “progressives” still don’t get it.

There they were on Twitter and in instant coffee-quick columns – joined by their titular intellectual leader, David Frum (yes, him) – mimicking Dylan Thomas’ verses to rage against the dying of the light while Donald “Nero” Trump plays the proverbial fiddle as the Constitution and the lingering shreds of the rule of law turn to ashes.

Donald Trump’s loyal minions insisted that Comey had to go because the cocky G-man had suddenly and conveniently earned an F over his handling of Hillary Clinton‘s curious handling of her emails. On cue and in unison, “progressives” shouted “cover-up” and crowed that a constitutional “crisis” was afoot after Saint Comey got the boot.

You’ll recall – since they apparently forgot – that days earlier many of these same “progressives” were sticking their rhetorical knives gleefully into the hapless and now unemployed FBI director after his snide remark that he was rendered “mildly nauseous” by the suggestion that his late-day election intervention had tilted the tight presidential race in Trump’s favour.

If you’re trying to keep score, among weathervane progressives Comey has gone from devil to saint to devil and back to saint over the past eight months. It’s a dizziness-inducing career trajectory, isn’t it?

Still, in the wake of Comey’s departure, progressives are also, once again, revisiting the willowy ghost of Richard Nixon and, drum roll, Watergate – the facile, all-purpose shorthand for a potentially combustible and politically fatal scandal.

The ultimate intent, I suspect, of resurrecting these familiar tropes in the context of Comey’s abrupt dismissal is to suggest that Trump has committed an impeachable offence in order, ironically, to stave off impeachment.

This is a self-defeating delusion that has not only gripped progressives like a coiled snake but reveals how they remain blissfully wedded to their cockeyed faith in – for want of a better term – American “democracy”.

Here’s the usually restrained CNN legal analyst, Jeffery Toobin, channeling his fellow progressives’ angst in a fit of anguished hyperbole. “It is a grotesque abuse of power by the president of the United States”, Toobin told the ever mesmerised-looking, Wolf Blitzer. “This is the kind of thing that goes on in non-democracies.”

OPINION: The deep state now works for the ‘good guys’

Clearly, Toobin doesn’t subscribe to Noam Chomsky’s prescient view that America has long forfeited the right to describe itself as a “democracy” and, instead, has morphed, over successive Democratic and Republican regimes, into what more accurately can be defined as an authoritarian state that serves the parochial interests of the few at the expense of the many.

It's daffy to think that Trump's army of nihilists will do a stunning volte face and deem him unfit to serve as president simply because he fired a cop – whatever the timing and cynical motivations.

But, of course, it’s understandable that Toobin’s unflinching fidelity to the anachronistic notion of America’s supposed democratic exceptionalism went unchallenged, since Chomsky – or anyone sympathetic to his understanding of US history or politics – is effectively outlawed from appearing on a news network that, not too long ago, treated Trump, the perpetual TV star, with such fawning deference and respect.

Turns out, Toobin and company are loath to acknowledge, let alone address, the prickly fact that more than 63 million Americans voted enthusiastically for an illiterate strongman who canned a guy most Trump supporters couldn’t pick out of an FBI line-up and, in all likelihood, couldn’t name the seven original Articles of the US Constitution Toobin et al so desperately want them to defend.

It’s much easier for progressives to blame Vladimir Putin or Julian Assange for Trump’s success and tin pot despot-like behavior rather than the millions of Americans who voted for, and rejoice in, his authoritarian disposition and actions. The blunt upshot is: James Comey’s FBI wasn’t going to save Trump’s America from itself.

Predictably, other progressives rushed with Usain Bolt-like speed to praise Toobin’s punditry as “authoritative and riveting.” You see, it’s not the pollyannaish meaning of what he says that’s important, but how brashly he says it.

Not done applauding Toobin’s glib defence of democracy and, by extension, the FBI, progressives embarrassed themselves by appealing to “patriotic” Republicans finally to choose the republic over party and agree to appoint an independent prosecutor to probe the metastasizing links between Trump and Moscow before, during and after the election.

Republican Senate Majority leader Mitch McConnell promptly answered the gooey, flag-waving overtures by telling gullible progressives and Democrats that Trump was right to show Comey the exit door and he wasn’t going to anoint a modern-day Eliot Ness to find out whether Trump is a “traitor” or not.

McConnell will, no doubt, quickly extinguish the tepid disquiet within the Republican ranks over Trump’s Comey gambit since he and the Republican powers-that-be consider the possible real-life Manchurian Candidate an indispensable and pliable asset serving, as I said, the parochial interests of the few at the expense of the many – and damn the Constitution.

In due course, Trump will name a successor to Comey. The Republican-controlled Congress will fall dutifully into line and approve whomever their malleable man in the White House nominates long before the mid-term elections in 2018. That, Mr. Toobin, is American “democracy” at work.

‘Trump will not be impeached’

Finally, and perhaps most absurdly, progressives are clinging like hallucinating shipwreck survivors to the fantasy that Trump’s impeachment is in the offing just over the horizon.

Poor, beleaguered Nixon didn't have an omnipotent 24/7 all-news channel that he could count on and seek comfortable refuge in to rewrite history and convince the nation that he wasn't a crook.

Note to raving progressives: It’s 2017, not 1974. Trump will not be impeached now, nor will he be in the foreseeable future. Republicans enjoy a firm, recalcitrant hold on Congress and, given their gerrymandering, vote-suppressing ways, flipping the House next year may be a bigger challenge than most progressives suspect.

The more salient point is this: Trump’s legion of followers has not only permitted him to cross so many traditionally uncrossable “red lines”, but they’ve cheered all along and encouraged him to erase those previously sacrosanct norms beyond recognition.

It’s daffy to think that Trump’s army of nihilists will do a stunning volte face and deem him unfit to serve as president simply because he fired a cop – whatever the timing and cynical motivations.

Meanwhile, Fox News, the de facto PR arm of the Republican party, will continue to give Trump all the time he needs to preach in rambling non-sequiturs to the converted about how the “fake news” business is intent on thwarting his devout mission to make America great again.

The “we report, you decide” charlatans will happily inoculate Trump against calls for his impeachment and, true to obsequious form, the Sean Hannity-led mob will ferociously impugn the motives, aims and reputations of his adversaries.

Poor, beleaguered Nixon didn’t have an omnipotent 24/7 all-news channel that he could count on and seek comfortable refuge in to rewrite history and convince the nation that he wasn’t a crook.

Trump does. And this time the president of the United States will say: “I’m not a traitor” and Fox News viewers will believe him. 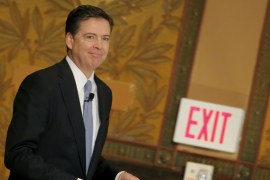 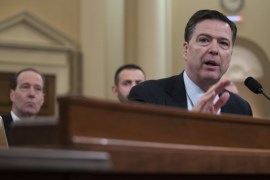 How far can FBI probe of Russia’s role in US vote go?

FBI chief James Comey says his agency is investigating claims that Donald Trump worked with Russia to get elected.