On March 31 at approximately 7pm in Asuncion, several hundred demonstrators managed to break the police cordon that protected the building of the Paraguayan Congress.

Agitated by a police crackdown hours earlier, protesters stormed the building and set it on fire. The police chose not to intervene as flames engulfed the Congress.

Hours later, the police raided the headquarters of the opposition Authentic Radical Liberal Party (PLRA) in downtown Asuncion without a court order and shot dead one of its youth activists. The excuse of the authorities was that some young men who participated in the riots had assaulted policemen and then hid in the party headquarters. Hundreds were detainees in the operation.

Footage of the chaotic scenes from Asuncion went viral on social media, putting the spotlight on the small Latin American country of six million.

But what led to the escalation of violence?

The legacy of a dictatorship

Paraguay emerged from three decades of US-backed military dictatorship in 1989. In 1992 – three years after Paraguayan dictator Alfredo Stroessner was removed in a coup – a new constitution was put in place which limited the presidency to one five-year term.

Despite the brutality of the military dictatorship and the people’s desire for political change, Stroessner’s Colorado Party managed to win every election and retain power until 2008. That year Fernando Lugo – a Catholic priest who earned himself the nickname “the bishop of the poor” for his work in poor communities – was nominated by the opposition as their presidential candidate and won, promising to push through a much-needed land redistribution reform.

But in 2012 Paraguay was hit by the right-wing wave that swept through Latin America and its president fell victim to what some observers called a political coup – the second one in the region following the removal of the president of Honduras in 2009. The PLRA, which initially backed Lugo, colluded with the Colorado Party and managed to impeach the president through a Congress vote. The excuse for the impeachment was a confrontation between landless peasants who occupied land owned by a Colorado Party member and the police, which resulted in the death of 17 people.

After the events of 2012, the alliance between Fernando Lugo, the PLRA and a group of different leftist forces fell apart, and the Colorado Party’s Horacio Cartes easily won the 2013 presidential elections.

Cartes inherited a stable economy with good macroeconomic indicators, but growth was slowing down. He sought to pass a package of reforms focused on stimulating investments, to promote the economic growth and to generate greater security. But the reforms did not bring the promised results and a group opposing the president within the Colorado Party started gaining ground.

Midway through his term, Cartes’ approval ratings dropped remarkably low. He faced two choices: to dominate the internal party process of choosing his successor in the primaries or to generate political support for his re-election and introduce the necessary constitutional changes for that to be possible. The president chose the second option.

The dispute over re-election

Cartes’ idea to have the president able to run for a second term was something that all presidents who preceded him since the beginning of Paraguay’s democracy in 1989 have publicly supported. Like the former President Nicanor Duarte Frutos, who was in power between 2003 and 2008, Cartes proposed to do that by changing the constitution.

These changes must be approved by both houses of Congress and put to a vote in a popular referendum in order to be signed into a law. All this requires an alliance of several political forces in a context in which none of them has a majority.

This led to an agreement between the Colorado Party, the Lugo-led Guasu Front (or “Broad Front” in the Guarani language), and one of the internal branches of the PLRA, led by Senator Blas Llano. The last two are seeking to conclude a new alliance between liberals and progressives that replicates the one that brought Lugo to the presidency in 2008.

The agreement caused public discord and extreme polarisation swept the Paraguayan political scene. Many opposed the constitutional changes pointing to the recent past when Stroessner was getting perpetually re-elected for 35 years. Public anger did not spill on to the streets until March 31, when the Congress held a secret session to pass the constitutional changes, disregarding internal procedural rules.

In response, the branch of the PLRA that did not support the changes, along with its youth wing mobilised its supporters and went out on to the streets. The police was instructed to crack down on the protests which encouraged more people to join them.

In the aftermath of the bloody clashes, the lower chamber of the Congress was convened and the constitutional amendment process was temporarily halted.

On April 2, President Cartes invited all political forces to an open dialogue in order to “reach a political solution”. In response, the opposition demanded the withdrawal of the draft amendment. The PLRA eventually quit the negotiations, while the Colorado Party blocked a Congress session trying to dismiss the amendment process.

On Monday both Cartes’ supporters and the opposition called for marches, and confrontations are possible. The events of the coming days promise to define the political future of Paraguay.

Ignacio Gonzalez Bozzolasco is a sociologist and professor at the Catholic University of Asuncion. He is also a researcher at PRONII-CONACYT in Paraguay and a PhD candidate at the University of Buenos Aires. 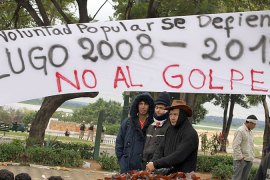 The country’s president has been removed from office, accused of failing to maintain social harmony. 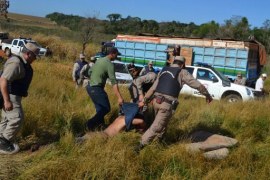 At least 17 killed in battles between police and farmers, prompting interior minister and chief of police to resign.