When terrorists targeted Coptic Churches on Palm Sunday, the infamous news outlet Breitbart shared the news on its Facebook page with the caption: “When will Muslims stop murdering Christians?”

Islamophobic outlets and individuals feast upon such attacks against minorities in Muslim-majority countries: They say they “prove” that “Muslims hate us” and that “Islam is a violent religion”.

Political leaders across the world have exploited and nourished such sentiments and have found that doing so is a winning strategy. French far-right leader Marine Le Pen, who now has a chance of becoming the next French president, once said that “no other religion [Islam] is causing problems”. She has also claimed that Pope Francis’ pro-migration comments are a form of political interference.

Against the backdrop of rising Islamophobia, Pope Francis has been calling for openness and interreligious understanding – an important gesture, regardless of what one makes of the Catholic Church’s teachings and practices. Francis’ choice of rhetoric is noteworthy, especially in light of the controversy stirred by his predecessor Pope Benedict XVI, whose remarks on Islam in his 2006 speech in Germany were heavily criticised by Muslim leaders across the world.

The pope’s visit to Egypt takes on a special significance in the aftermath of the recent attacks on Christians in the region, but also given what he represents in the debate about Islam in the West and the world, and its relation to violence and terrorism.

A strong voice against Islamophobia

The pope has stood up against the essentialist positions of some politicians and clergymen on “protecting” Christianity and Christian values. He said: “When I hear talk of the Christian roots of Europe, I sometimes dread the tone, which can seem triumphalist or even vengeful. It then takes on colonialist overtones.”

Throughout the years of his papacy, Francis has been a consistent voice of reason and decency when tackling Europe’s migration issues. While Donald Trump and European leaders have been calling for building walls, Francis made sure to mention, on more than one occasion, that those who build walls and not bridges are not Christian. He also said that “it’s hypocrisy to call yourself a Christian and chase away a refugee or someone seeking help.”

OPINION: Holy Week for Egypt’s Copts will never be the same

When some European and US politicians started to call for religious tests and only admitting Christian refugees, Francis welcomed Muslim refugees in the Vatican and included Muslims in the washing-of-the-feet ceremony on Holy Thursday. He also reminded Christians that Jesus himself was a refugee.

When others warned about the threats to Europe’s identity, Francis unequivocally said that migrants do not pose a threat but rather constitute an “opportunity to grow.” In his address to the US Congress in September 2015, he said: “We are not fearful of foreigners, because most of us were once foreigners … We must not be taken aback by their numbers, but rather view them as persons, seeing their faces and listening to their stories, trying to respond as best we can to their situation.”

And when the discussion in certain circles becomes whether Islam is a religion of peace or violence, Francis has repeatedly stressed that terrorism has no religion. As he mentioned in his speech to the Egyptian authorities on the first day of his visit to Egypt, “it is our duty to dismantle deadly ideas and extremist ideologies, while upholding the incompatibility of true faith and violence, of God and acts of murder.”

At Al-Azhar University on the same day, he said that “no act of violence can be perpetrated in the name of God, for it would profane his Name.”

Therefore, when Francis visits the Arab world and addresses Muslim-majority societies, he brings with him the best of Christianity and a Muslim-friendly demeanour, defying images of the Christian “Other” or the Crusader or the proselytising missionary.

Pope Francis has not joined various Western political figures blaming Islam for ISIL and terrorism. But he also has not remained silent on the discrimination and violence minorities have suffered both in the West and in the East. While distancing religion from terrorism, he always mentions the need to protect religious and individual freedoms in order to counter the spread of extremist ideology.

He reiterated this point during his visit to Cairo calling for “unconditional respect for inalienable human rights such as equality among all citizens, religious freedom and freedom of expression, without any distinction”.

Consequently, affirming that “terrorism has no religion” does not absolve those who spread religious hatred or those who commit human rights abuses while claiming to be fighting terrorism. Pope Francis’ discourse on terrorism serves as an important reminder that minorities’ rights should be protected alongside the freedoms and rights of other individuals and groups in society. One should not come at the expense of the other.

There needs to be critical introspection, especially in countries like Egypt where Copts have historically been victims of “structural and state-sanctioned inequality“.

Moreover, Egypt’s dismal human rights record should be of concern to the majority and the minority, as Human Rights Watch warned that “human rights in Egypt have deteriorated far beyond the repression that existed before the country’s 2011 uprising.” Coptic Bishop Macarius similarly told Reuters that “security solutions never succeeded alone. No state in the world should be a police state, either here or elsewhere. Emergency all the time makes people nervous.”

As he addressed President Abdel Fattah el-Sisi and other Egyptian officials, Pope Francis spoke of how Egypt should at the same time build peace and fight terror. However, any approach to peace and counterterrorism which does not deal with religious freedom of minorities as well as abuses of human rights by both government and non-state actors would be unsuccessful. It is as simplistic as the view that the solution to Egypt and the Arab world’s problems lies with strongmen who blatantly disregard human rights in the name of a “war on terror” or the “protection of minorities”.

Halim Shebaya is a Beirut-based analyst. He teaches in the School of Arts and Sciences at the Lebanese American University. He holds an MDiv in Theology (NEST), MA in Middle Eastern Studies (SOAS), and an LLM in Public International Law (Nottingham). 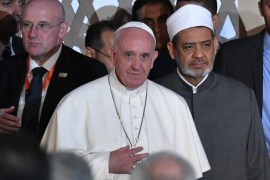 Catholic pontiff’s two-day visit is aimed at fostering peace between the Muslim and Christian-minority community. 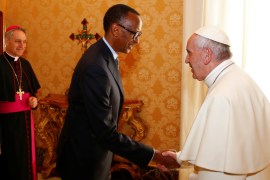 Catholic church was accused of being close to Hutu-led government in 1994 when 800,000 mostly Tutsis were killed.