Early March, 2017: The United States government and the United Nations announce large increases in the amount of coca being cultivated in Colombia.

The head of the US Bureau of International Narcotics and Law Enforcement Affairs flies to Colombia and meets the President. The increase is due to the end of aerial fumigation operations, he says, but he also assures the press that he would not be asking the government to restart that policy.

Speaking at the UN Commission on Narcotic Drugs in Vienna, the Colombian Minister of Foreign Affairs blames the growth on the machinations of drug trafficking gangs and greedy peasants who, she claims, are planting more coca so they can take advantage of the new substitution initiatives under the peace accords.

The news of the rise is reported with the air of a national crisis. Semana, the largest magazine in the country, says the bumper crop will affect the “international order, in particular in relation to the United States, which will become narcotised”. This is no less than “the great challenge for the post-conflict era”.

According to the text of the peace agreement the government should be weaning campesinos (peasant farmers) off growing coca by first offering incentives to grow alternative crops. Nevertheless, forced manual eradication takes place across the country, and the Colombian government has announced the largest cultivation target in its history: 100,000 hectares.

In the first few months of the year more than 40 “blockades” are recorded: eradication teams are prevented from working by communities who demand the assistance they have been promised. The government responds with the specialised police force, the ESMAD, who disperse the protesters with tear gas and rubber bullets. In one case the police arrest protesting farmers and the community responds by detaining 15 officers for 24 hours.

Where does this excess capacity come from? Why are so many farmers in Colombia prepared to break the law? The answers are not mysterious.

The government’s own comptroller general recognises that “after almost 200 years of reforms and counter-reforms, and many billions of pesos invested, the same crisis reigns in agriculture”(pdf).

The “agricultural policy crisis”, noted the comptroller general’s report, is the result of “the lack of political will on the part of the state to make viable the campesino economy”.

Colombia’s President Juan Manuel Santos and his administration have adopted reforms that officials say will lead to a more equitable distribution of land. But these policies “in reality display the contrary”, notes the report. Like his predecessors, Santos is committed to the promotion of “exclusive trading strategies, based in ‘mega-projects’ which don’t solve the underlying problem”. Instead, they could “consolidate and deepen even further both displacement and concentration of land”.

A typical example was the Zidres Law, passed during the conclusion of the peace agreement, which includes some mild measure to address land inequality in one of the most unequal countries in the world. The law, which deals with the takeover of land in conflict-ridden areas, works for large landowners and against the core tenets of the peace deal. These landowners, one analysis points out, “will be given incentives for productive partnerships, technology packages, subsidies and support through a whole series of mechanisms from which Colombian peasants have never benefited in the country’s entire history”.

The result of such policies? Rural poverty and backwardness are by every measure a national scandal.  Today in the countryside one in ten people cannot read or write. One in five children between five and 16 years of age do not attend school. Three quarters of people aged between 17 and 24 are without access to an educational institution. In some regions four out of every five people live below the poverty line.

But neither land policies nor the national economic model are considered relevant to the drug policy debate.

Free trade deal with the US

Semana, running through the possible causes of the rise in coca production, did not mention it either. Nor did it mention the passing of a Free Trade Agreement with the United States in 2012, which correlates closely with the beginning of the rise in cultivation in 2013. That death knell for Colombian agriculture, OXFAM America estimated (pdf), would mean around 1.8 million farmers could suffer a significant drop in their income, leaving them with few options except migration, joining the FARC, or growing coca.

“As was entirely predictable,” reported the Colombian press one year after the treaty came into effect, “the initial damage is occurring in agriculture, where the country’s tariffs have been relinquished and US subsidised goods accepted.”

Keeping such facts off of the drug policy agenda has been a great propaganda victory for the Santos administration, achieved with the complicity of international organisations eager for high-level affiliation.

The proper question for analysts and commentators is: Why do the poor do what they do? The forbidden question is: Why are they so poor?

The government publicly attributes coca cultivation to the machinations of peasants, the guerrilla and criminal groups, and Santos has even felt comfortable enough to claim that the demobilisation of the FARC will mean Colombia can finally become drug-free.

Can a government pursue an economic agenda that drives peasants to produce an illicit crop in order to survive, and still be considered to be concerned with reducing drug cultivation?

Inside Colombia, political activists, community leaders and human rights defenders recognise the source of the problem and call for fundamental changes in the nature of the society. They are currently being murdered at a rate of around eleven a month. A political party that includes a new economic model in its charter has had more than 120 of its members murdered in the past five years.

Has there ever been such a thing as a counter-narcotics policy in Colombia? Is it sensible to claim, as many analysts now do, that the rise in cultivation proves the “failure” of past policies? Can a government pursue an economic agenda that drives peasants to produce an illicit crop in order to survive, and still appear concerned with reducing drug cultivation? The answer for most analysts is yes, regardless of how absurd and counter-intuitive it may appear.

And what of the supposed “failure”? Pentagon spokesperson James Gregory once described the policies pursued in Colombia as among the US government’s “most successful and cost-effective programmes”. And he added: “By any reasonable assessment, the US has received ample strategic national security benefits in return for its investments in this area.”

What is called “counter-narcotics funding” has in fact been funding for the Colombian military and police, which are now both modernised and enormous. Around 70 percent of Plan Colombia’s “counter-narcotics” funding actually never leaves the United States because it used to purchase arms and equipment.

Because of that money – which amounts to more than $10bn in the past two decades – Colombia remains the major regional ally for the US and its leadership is committed to the economic model preferred by foreign capital. And as Christian Aid points out, Colombia also remains a country in which “wealth and power is concentrated in the hands of the elite [who] dominate politics, monopolise resources, and repress social movements, trade unions, political opposition and others seeking to challenge the balance of power”.

Ross Eventon is a research associate at the Global Drug Policy Observatory, based in Latin America. 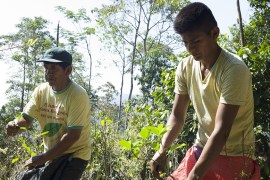 A soldier, a local radio presenter and a coca leader give their view on life in Peru’s main cocaine-producing region.

Guatemala’s state corruption and the heirs of colonial privilege