Immediately after Marine Le Pen successfully advanced to the second round of the French Presidential election by beating the candidate from the mainstream right, Italy’s far-right leader Matteo Salvini, tweeted a photo of him with the French politician, with the caption “Go Marine”. He later added: “it is time get rid of the Brussels cage!”.

Dutch far-right leader Geert Wilders – known for his anti-Islam rhetoric – similarly expressed his excitement: “Congratulations sent to Marine Le Pen. A day of celebration for all Patriots in Europe. On to the 2nd round and the Presidency!”

These expressions of transnational solidarity between Europe’s far-right leaders were hardly surprising.

In the past few years a number of these far-right parties from across Europe have started “officially” coordinating strategies and in January, representatives from these movements gathered in Koblenz, Germany for a conference. The gathering prompted some observers to talk about an allegedly new “nationalist international” emerging in Europe. While the “nationalist international” appears as an oxymoron at first, international cooperation between ultra-nationalists has a long history.

The history of supranational nationalism in Europe

Right-leaning, nationalist movements existed in the old continent since the pre-WWI era.

Linked by anti-Semitism, ethnic nationalism, cult of force and violence, anti-leftism, anti-parliament and anti-democratic policies, national resentments, and/or imperialism, fascist-like movements played a significant role in Europe’s politics and society since the 1920s.

Europe’s far-right groups also often collaborated with each other across national borders. Notably Benito Mussolini’s fascism was influenced by French ideas, and later inspired similar authoritarianisms in other European countries.

In fact, a “fascist international” was a dream for many nationalists in the interwar period.

Many of them joined the famous fascist international conference of Montreux, and even became foreign soldiers in the German army during World War II. After 1945, many neo-fascists, including Oswald Mosley, tried to build pan-European associations. They started with the European Social Movement of the early 1950s, which was also their extremist response to the mainstream process of European integration.

OPINION: The rise of the black international

Since the 1980s and 1990s more structured far-right parties as well as little groups have been rising to prominence in Europe on a platform based on ethno-nationalism, sovergnity, and the defence of national traditions. In recent years, the popularity and outreach of these groups have been further facilitated by internet and social media.

The “protection” these parties and groups offer is appealing because of the fear of globalisation, Europeanisation, and immigration along with the failures of traditional parties. From the 2000s onwards, terrorist attacks, the economic crisis, and the refugee crisis helped spread their popularity even further and provided ground for more common action on issues that the general population feared. Therefore, existence of a rightwing supranational dimension is not surprising.

Far-right parties recently established a group in the EU parliament called Europe of Nations and Freedom. This further allowed them to coordinate their policies at a supranational level – possibly aiming to dismantle  EU institutions and integration. They imagine a new federation of European nations which has to be (implicitly) “white” and which should defende national “native” traditions. Naturally, their vision of Europe looks very different from the existing cosmopolitan and multi-cultural one.

Their Europe will be even more suspicious of Muslims, reintroduce national currencies, and surely implement new laws against the current free circulation of people. Internationally, it will be supporting Russia while admiring Trump and his administration.

As Alternative for Germany (AfD) leader Frauke Petry said in a telegram to Trump, “We as Germans and Europeans will follow your foreign policy position with hope, because it is refreshingly different from the course of the past decades”.

This shows the potential appeal of a “nationalist international” – especially today with the European project lacking any real appeal. Also, these far-right parties are already influencing policies on immigration and refugees in many countries.

The problem is that the EU has been turning a blind eye on these groups. And as Maya Goodfellow recently pointed out, media is not always doing a goob job of understanding these far-right leaders and explaining their policies to the general public: “Journalists and reporters must critically analyse far-right narratives instead of – as often happens in covert ways – reiterating them.”

After Brexit and the victory of Trump, these extremist parties and culture will represent a strong challenge to western democracies for the years to come.

Andrea Mammone is a historian at Royal Holloway, University of London. His recent book “Transnational Neofascism in France and Italy” is published by Cambridge University Press. He has written for the Washington Post, the New York Times, CNN, The Independent, and Foreign Affairs, among others. 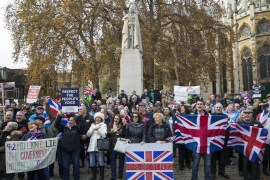 How will Brexit affect the European Union?

With populist parties on the rise, we ask if more countries will abandon the EU and what that could mean for Europe.

Europe is politicising Afghan refugees instead of helping them