The Guardian recently featured a heart-rending story about children rescued from trafficking in Togo, paralleling a previous story on the same subject in Benin. Both reports painted a picture that will be familiar to many: ruthless employers exploiting the innocent; parents compelled by poverty to “sell” their children; cultural backwardness making things worse, helpful NGOs saving the day.

It’s powerful stuff. But it’s also highly misrepresentative. And it’s actually so simplistic that while I doubt neither the integrity nor the good intentions of these journalists or those publishing similar pieces, their work arguably makes things worse for the very people whose suffering they are trying to highlight.

In what follows, I’ll explain how, and I’ll do so by drawing on 10 years of research and a recent book I have published on the issue, with some of the very communities mentioned in these articles.

First, some background. Trafficking exploded as an issue in West Africa when a boat full of irregular migrants was intercepted on its way from Benin to Gabon in 2001. Because it was full of children and teenagers, it was labelled a “slave-ship” that heralded the arrival of a modern-day slave trade. UNICEF was responsible for this initial labelling, but it was picked up by international journalists, the US Trafficking in Persons Office, and countless NGOs. Within months it had become accepted knowledge and millions of dollars began to flow into the region to end “the scourge of child trafficking”.

But there was a problem. The young people on that boat didn’t consider themselves victims of any crime, and certainly not child trafficking. In 2007, I interviewed a number of them and it was clear that they were just youngsters migrating for work. Adri was 19 when we spoke and 13 at the time of his rescue. “We were migrants”, he said, “not slaves”. “We’d paid a smuggler to get us to Gabon because we were hoping to find some work there in the fisheries”.

So, after being “rescued” by the authorities, he and his friends had to go back to their villages until they had made enough money to leave again, which most of them promptly did.

This was far from unusual. In the years I spent working in Benin and Nigeria, I interviewed hundreds of kids officially labelled as victims of trafficking and not one told me that he’d been kidnapped or coerced. Other researchers have found similar things in Benin, in other West African countries, and in countries as diverse as Argentina and South Africa, to name only two.

Then why were they moving? The most obvious and basic answer is that these kids needed the money, like anyone else living under capitalism. It’s not that they were starving, in the way that one thinks when one reads sentences like “poverty pushes their parents to sell them”. Few people experience poverty like that, and almost no one in Benin or Togo is starving. But everybody needs money. Whether that be to pay school fees, to get ready for marriage, or simply to help out at home, money is essential and for many people migrating is the only way to access it. Sometimes kids will move of their own accord and at others parents will find them a job and take part of their earnings as a contribution to the household. Hardly the same as a “sale”.

People with access to what I call 'meaning-making power' - the press, respected international agencies, the type of folk we quote as authorities - tend to reproduce sensationalist received ideas without even questioning them.

So, what is going on here? Why is it that journalists and the development workers they talk to say one thing and academics like me and these young migrants say another? For one thing, sadly, most development workers and pretty much all the journalists who interview them simply don’t spend enough time in these places to really understand what is happening.

The journalists who write these stories will probably have spent a few days on site at most, while the majority of international NGO staff or UN employees will have spent barely any more. Although it may sound ridiculous, of the 100 or so development workers I interviewed as part of my research, only a handful had ever even met the communities they labelled with their words or targeted with their policies, and none had ever lived among them.

This matters a lot. Because it means that people with access to what I call “meaning-making power” – the press, respected international agencies, the type of folk we quote as authorities – tend to reproduce sensationalist received ideas without even questioning them.

When it comes to children, one of the most powerful of these is that they are all inherently vulnerable and thus in danger when at work or on the move. The result is that many migrant working children are automatically assumed to be victims of trafficking when they are away from home, with the blame put variously on irresponsible parents, weak states, or abstract poverty. UN staff are taught to think like this, and the journalists who interview them are inevitably taught to think the same.

But that isn’t the whole story. Because not all development workers uncritically accept what they are told and some know that reality is more complex. However, as Nina, a very senior UN employee once told me: “The trouble is that stories about poor kids migrating because of political-economic injustice simply don’t sell. It’s suffering that sells in Africa. You have to be sexy to raise money, and trafficking or slavery is sexy”.

OPINION: On capitalism and coercion

Just think about that for a minute. It’s not about corruption, at least not in the formal sense of that term. It’s about is an entire political system designed to eschew the political economy of lack and instead reproduce comforting stories about African cultural backwardness amid the grinding pressure of poverty, since that’s what sells among the largely white, Western media audience and the donor agencies we fund. If suffering is sexy in Africa, it’s not the kind that is caused by our governments.

This brings me back to the Guardian piece and to similar pieces like it. I don’t doubt that the journalists who produce this work are good people trying to make the world a better place. I know a number of them and am certain that they believe in what they’re doing. The problem is, though, that this kind of work arguably makes things worse.

It deploys a gaze which is almost pornographic. In this respect, it disempowers the people it looks at and de-politicises the conditions in which they live. By constructing children as victims, it legitimises policies or raid-and-rescue missions that often make life worse for “rescued” kids. And by individualising suffering and exploitation, it detracts from the global structures that make these things possible.

Though many examples of this tendency exist, one in particular stands out. In the early 1990s, US Senator Tom Harkin, who was then the world’s most influential political donor in the global fight against child labour, introduced a bill to the US Senate to ban textile imports from Bangladesh unless factories could show that they were child labour-free.

Harkin had been horrified by images of working children in Bangladeshi factories and was disgusted that their labour propped up US retail supply chains. His intention was thus to “help”. Yet from the perspective of the kids he sought to assist, his intervention was an unmitigated disaster. Almost overnight, thousands were laid off, with many ending up in far worse conditions – on the street, in sex work, or in dangerous factories even further under the radar. Surely it would have been better for him to address the power of US corporations buying from Bangladeshi factories, demanding an extension of labour rights and good pay all the way down to the young workers in question?

Ultimately, the pornographic gaze that allows for these kinds of interventions is part of the problem it seeks to remedy. Far better, I would suggest, for journalists to spend longer with the people on whom they report, to let them tell their own stories, and to use the privilege of access to the global press to contextualise their stories in global structures of power and exclusion of the kind characterising life under neoliberal capitalism. Then they might start making a difference.

Neil Howard is Research Fellow at the University of Antwerp and Founder-Editor of Beyond Trafficking and Slavery at openDemocracy.net. 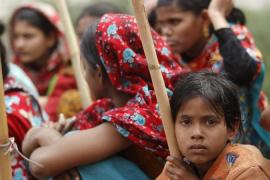 On capitalism and coercion 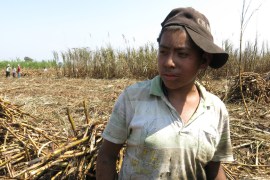 We travel to Mexico to find out why so many Mexican children drop out of school to join the country’s workforce.

To get through coronavirus lockdown, we need basic income

Abolitionism: A hostage to capitalist forces?