Despite manifestations of mutual sympathy, the fallout between Vladimir Putin and Donald Trump over the US missile attack in Syria (or any other issue that could have come up), was easily predictable even back in November 2016.

A well-choreographed confrontation serves both men better than friendship, because it helps them shift the attention of domestic audiences from their own misgivings and alleged corruption.

That confrontation works as an endless soap opera which rattles the viewers’ nerves by promising an ultimate showdown that never materialises because it would kill the show. Just look at the latest episode in the Russian version of the series.

The video of the new Russian envoy to the UN scoffing at his British colleague during a discussion on Syria at the Security Council didn’t make too many headlines in the West, but it went viral in the Russian-language sector of the Internet. Vladimir Safronkov’s remarks were largely lost on the Western audience, because he uttered them in Russian, reading from a piece of paper.

“Look at me, don’t you turn your eyes away,” Safronkov said, using disrespectfully informal “ty” instead of more appropriate “vy” while addressing the British diplomat, Matthew Rycroft. Both forms are translated into English as “you”.

To a Russian speaker, Safronkov sounded unmistakably like a gopnik – a word reserved for semi-criminal lumpen-proletarian, a thug, you may say. In the past 30 years, gopnik jargon, dress style and musical tastes have permeated Russian society – from taxi drivers to top officials. When Putin said, he would “flush terrorists down the toilet” referring to Chechen militants, he sounded like a gopnik, too.

Like other scandalous gopnik-style statements the Russian foreign ministry has developed a taste for in recent years, the whole show at the UN targeted solely the domestic audience. The goal is to make the average Joe identify himself with one of their country’s top diplomats and take pride in him reprimanding foreign foes in the vernacular language he uses to converse with friends and colleagues.

Everything Putin's government does on the foreign policy front is dictated by the need of a highly corrupt political regime to consolidate majority support and marginalise the opposition, which threatens to go after multibillion assets allegedly accumulated by top officials and their business associates.

Everything Putin’s government does on the foreign policy front – from intervening in Ukraine and Syria to endorsing Donald Trump in the US election – is dictated by the need of a highly corrupt political regime to consolidate majority support and marginalise the opposition. The latter threatens to go after multibillion-ruble assets allegedly accumulated by top officials and their business associates.

The regime is obsessed with maintaining at least a superficial level of legitimacy, so all of its efforts are aimed at keeping high approval ratings and ensuring convincing results during the elections. Once the perception of legitimacy is shaken, the spectre of Ukrainian-styled revolution becomes all too real.

Putin is facing re-election for his fourth term as president in March 2018. His only viable rival, Alexei Navalny, has challenged him by launching a presidential campaign in December and staging a successful nationwide protest on March 26.

The Kremlin can easily bar Navalny from elections, using his latest conviction as a pretext. Most observers believe that this is what is going to happen anyway. But that decision will greatly reduce the perceived legitimacy of the regime, especially since Navalny was prosecuted for fraud on extremely dubious charges in the past and has already successfully challenged his first conviction in the European Court of Human Rights.

By all means, the presidential administration, now led by former liberal politician Sergey Kiriyenko, is tasked with devising a successful propaganda narrative that will produce a convincing result in March next year.

A sharp shift towards ugly and superficial social conservatism and ultra-nationalism allowed Putin to secure a strong majority in the 2012 election and allowed his approval rating to soar as high as 89 percent after Russia invaded Crimea in 2014. But what pollsters call “the Crimea effect” is starting to evaporate.

A recent poll conducted by the Levada Centre showed that 38 percent supported nationwide anti-corruption protests staged by Navalny in March.

The Kremlin is surely still toying with various possibilities, but its election strategy is starting to take shape.

Firstly, it is trying to snatch away Navalny’s successful anti-corruption agenda – two regional governors have been arrested in recent weeks on graft charges. It is not inconceivable that Putin might even sacrifice his long-time ally, prime minister Dmitry Medvedev, who became the target of Navalny’s latest investigation. His film about Medvedev now has almost 19 million views on YouTube.

But it is also clear that the Kremlin believes that the Crimea consolidation effect will still work its magic, for at least a part of the population, in 2018. Last week, the Russian State Duma suddenly scheduled the presidential election for March 18, the day Russia officially incorporated Crimea in 2014.

The need for a hostile America

One absolutely essential element in the Crimean consolidation narrative is hostile America. The message Russian propaganda has successfully conveyed for the past three years is that it was the US that plotted and funded the Ukrainian Maidan revolution. Following logic, it was Russia’s noble duty to intervene and protect those in Ukraine who stood against the aggressive West and its local “nationalist puppets”, who – Russian TV alleged – strove to erase the identity of Russian-speaking Ukrainians.

It is simply impossible to sell the already not-so-fresh product of patriotic consolidation in a situation where your arch-enemy is suddenly your friend. So a shift to confrontation mode has been inevitable. Similarly, for Trump, it was crucial to derail criticism on account of his staff’s alleged collusion with Russia. Many of his supporters were quick to say: See, he is not a Russian stooge.

But even though they are engaged in this theatrical standoff, both sides know exactly where the redlines are. This is why Russian anti-missile systems, provided to Syrian president Bashar al-Assad, were conspicuously inactive during the US strikes on al-Shayrat airfield in Syria.

And this is why Trump is extremely unlikely to go after the foreign assets, which – as Russian opposition alleges – members of the Russian regime have amassed during the 17 years of Putin’s rule. If he does, the cozy symbiosis between the two frenemies will end and the showdown will be for real.

Leonid Ragozin is a freelance journalist based in Riga. 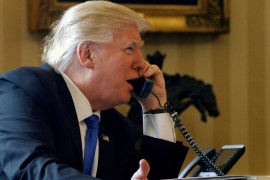 Trump and Putin vow to cooperate in ISIL fight