Eventually, the truth reveals itself.

And so it was after President Donald Trump – a still surreal phrase to put to paper – elected to bomb a mostly vacant Syrian airstrip in supposed response to the slow, suffocating murder of children by Bashar al-Assad’s murderous regime.

The Pentagon-supplied images of Tomahawk cruise missiles bursting into the night sky triggered a near orgasmic reaction among the same band of US cable TV network-approved geopolitical “experts” and journalists-in-name-tag-only who gush with unbridled excitement each time flashy weapons go bang in the night.

You’ll recall that not too long ago, this giddy, easily impressed lot, joined by rancorous Democrats on Capitol Hill, were universally repulsed by the same dangerous demagogue they recently applauded on Twitter, TV and elsewhere as a bona fide “commander-in-chief”.

For an instructive moment, all the hyperbolic chatter about impeachment and treason evaporated as the unlikely coalition of “liberal” and neocon card-carrying members of La Resistance rallied around the flag, yellow-ribbon-imbued patriotism and a racist boor who just happens to be president of the United States.

On cue, much of that so-called resistance in Washington and beyond heaped gooey praise on Trump, insisting the missile strike was the defining act of a statesman who had finally, if belatedly, grasped the profundity of his duties and responsibilities and of the office he shockingly holds.

All Trump had to do to win their saccharine-laced rhetorical approval was to do what his predecessors have done with often calamitous regularity – issue the order to kill.

The attendant result: Trump had instantly morphed from illiterate foreign policy nincompoop to oh-so-serious president who was, remarkably, channeling the “world’s conscience” to boot.

Forgotten in this hysterical revisionism, of course, was Trump’s tough-guy pledge to look war-ravaged Syrian kids and their families in the eye and tell the would-be “terrorists”: you can’t come here.

In any event, it turns out Trump gave his mentor, Vladimir Putin – and, by extension, Bashar al-Assad – a heads-up that his “well, I’ll teach you” volley of cruise missiles was on its vaguely destructive way so the fleet of fighter jets sheltered at the base could safely take off the following day – presumably to kill and maim more Syrians.

Ah and reportedly it wasn’t his or indeed the “world’s conscience” that prompted Trump to respond to images of children contorted in sarin gas-induced suffering, but rather a little word in his tin ear from his daughter, Ivanka, the corporate media-manufactured White House conscience-in-residence.

As I said, the truth eventually emerges.

Like the roster of telegenic presidents who preceded him, Trump fashioned a made-for-TV moment of perspicacity to announce that he could also bomb and kill in the same places that the US has been bombing and killing people for decades.

There Trump was, summoning all the faux solemnity that he could muster while reading from a teleprompter like a stuttering schoolboy to invoke God and America’s equally sacred “national interest” as justification for yet another demonstration of his nation’s singular military “resolve”.

The world has seen and heard this pantomime on display so many times over so many years that this vacuous, formulaic ritual could rightly be dubbed the presidential equivalent of Groundhog Day.

By now, it should also be clear to anyone with a functioning synapse that if you throw a dart at a globe, chances are it will land on a country - from Vietnam to Iraq - permanently scarred by America's long, irresistible compulsion to wage war.

From John F Kennedy to Trump and every other Democrat or Republican president in-between, arguably, the job’s principal prerequisite is satiating America’s insatiable addiction to war.

Each of these presidents has taken their now familiar turn behind a desk in the Oval Office or at a lectern adorned with the presidential seal, to invade, threaten to invade or carpet bomb – legally or illegally – some new spot on the map and the innocent people who inhabit it.

A fix of ‘shock and awe’

Last week’s predictable spasm of state-sanctioned violence was simply the latest evidence of the US political, military and media establishment’s need – or perhaps more accurately, the institutional demand – for a satisfying fix of “shock and awe” delivered, as always, in the parochial, amorphous name of “national security”.

The immediate political dividends a succession of presidents has derived from these choreographed shows of America’s might and “sacrifice” are not only keenly established, but are an undeniable part of the calculation to recapture – when and if necessary – much of the public’s support and admiration.

The American experience has shown that a well-timed war or news of a “triumphant” special forces encounter with a terrorist “mastermind” can be a useful tonic for a faltering presidency – young or old.

By now, it should also be clear to anyone with a functioning synapse that if you throw a dart at a globe, chances are it will land on a country – from Vietnam to Iraq – permanently scarred by America’s long, irresistible compulsion to wage war.

Invariably, the clumsily crafted rationales once offered up with such conviction and certitude to warrant the death and destruction have proven to be a lie after lie, consigned to a convenient, pan-political denomination memory hole.

Though discredited, every president inevitably recycles the standard lines in defence of more war, confident that most journalists and voters won’t remember the not-so-distant past in the patriotic rush to defend America’s apparently precarious future.

Nor do they remember, it seems, the human toll their costly addiction has exacted on millions of children, women and men who did not seek or require America to “liberate” them.

From Mai Lai to Mosul, the indelible pictures of the countless casualties of America’s wars exist as a true and lasting testament to the incalculable pain they have caused.

We know Donald Trump won’t pay a moment’s heed to that appalling history, but don’t kid yourself, neither will the next US president. 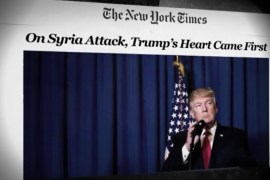 Syria, Trump and a media u-turn

A look at the US media’s change in covering Trump after the strike against Syrian base. Plus, the power of social media. 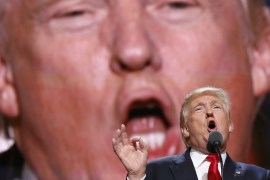