The second rendition of the Muslim Ban dropped Iraq from the list of Muslim-majority states, exempted current visa and green card holders from the restricted states, and featured other tweaks made to deflect any constitutional challenge.

On Sunday, March 5, in Washington State, a Sikh man was shot and wounded in front of his Seattle home. A hatemonger told Deep Rai to “go back to your own country”, then proceeded to shoot him.

This shooting follows the murder of another man of Indian origin in Kansas City, who was similarly told to “get out of my country” before being fatally shot on February 24.

The murder of Srinivas Kuchibhotla came roughly a month after Trump’s enactment of the first Muslim Ban, which spurred the mass protests and legal challenges that ultimately brought about its demise, and the re-drafted executive order issued on Monday.

Upon first glance, it may seem as if the vigilante violence that targets Muslims, and in the case of Rai and the late Kuchibohotla, individuals stereotypically perceived as Muslims, is entirely disconnected or tenuously linked to the banning of Muslims.

The latter involves formal state policy, while the former concerns the irrational or deviant actions of private individuals. However, in the way that the xenophobic or Islamophobic rhetoric of politicians emboldens animus on the part of citizens, government law and policy also endorses bigoted views and authorises the violence unleashed on Muslims and individuals perceived as Muslims.

This dialectic, whereby the state criminalises Muslim identity or brands it suspicious by law, effectively instructs its citizens to partake in the national project of identifying and punishing “the terrorist outsider”.

Islamophobia is the presumption of guilt assigned on to Muslims by state and private actors. But it must also be understood as a dialectic, namely, a process by which state policies such as the Muslim Ban or counter-radicalisation policing endorse ingrained and popular stereotypes of Muslims as alien, inassimilable, and prone to terrorism; and second, emboldens the private animus and violent targeting of Muslim subjects.

Therefore, Islamophobic policies, like the Muslim Ban, impact far more than immigration or national security policy. Their legal impact is merely one dimension of their aggregate damage.

By endorsing the Islamophobic premise that Muslim identity is presumptive of radical threat or terrorism, Islamophobic policies and programmes enacted by the state propagate the damaging stereotypes associated with this premise, and promote the private vigilantism that threatens Muslims, and communities mistakenly caricatured as Muslims.

The Muslim Ban rubber stamps the embedded idea that terrorism is exclusive to Islam, and regardless of one's legal status, exposes bona fide and imagined Muslims to the attacks of hate-mongers that take the law into their own hands.

This is especially the case during the Trump era, whereby his powder keg of political rhetoric and ominous policy has spurred a frightening rise in hate crimes and incidents targeting Muslims and perceived Muslims.

Private Islamophobia, or the animus and violence unleashed by individuals, affects far more than just Muslims, but also Sikhs, Latinx communities, Arab and Middle Eastern Christians, South Asian Hindus, East African non-Muslims, and other groups that fit the caricature of the Muslim outsider.

Law is far more than merely law. And the Muslim Ban is a policy that affects far more people than merely immigrants travelling to the United States from Iran, Libya, Somalia, Sudan, Syria, and Yemen.

While its direct legal effect is to exclude nationals from these states, its cumulative influence is far more expansive and injurious.

The Muslim Ban rubber stamps the embedded idea that terrorism is exclusive to Islam, and regardless of one’s legal status, exposes bona fide and imagined Muslims to the attacks of hatemongers that take the law into their own hands.

State-sponsored Islamophobia incites the increased arson and vandalism of mosques, the attacks on Muslim women wearing the headscarf, the rise of anti-Muslim slurs emanating from the right and the left, and indeed, the shooting of Rai and murder of Kuchibohotla.

This Muslim Ban, unfortunately, will not only spur more Islamophobia at airports, but also spells more malice, menace, and murder beyond them. 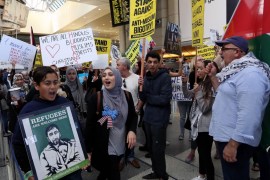