To get an idea of how undocumented immigrants are responding to President Trump’s crackdown, I spoke to Natalia Aristizabal, co-organising director of New York-based Make the Road, a non-profit organisation working with Latino and working-class communities.

“What I’ve seen from folks is a yearning to fight back,” she told me. “Our basic model right now is that we’re here to stay and we’re not going to go out without a fight.”

Arizitzabal noted that resistance is strongest among so-called Dreamers; unauthorised youth who were brought to the US as children, some of whom were granted temporary relief from deportation under President Barack Obama. “Those are the folks I hear even more of a defiant tone of I’m not going anywhere,” she said.

That kind of attitude is not surprising, given that immigrants tend to be highly motivated risk-takers with a strong work ethic; attributes that help explain why liberal, conservative, and libertarian think-tanks in the United States may diverge on policy recommendations for undocumented workers, but agree that immigration benefits the economy.

But in the Trump era, policy arguments based on robust research must compete with populist appeals.

Trump has cast unauthorised immigrants as a competitive threat to “vulnerable American workers”, a narrative that helps to explain why his sweeping new criteria for deporting undocumented immigrants resonates with his white-working class supporters struggling with unemployment, poor job security and low wages (PDF).

Though framing the US labour market in terms of simplistic cause and effect may be a sound political tactic, the argument that deporting undocumented immigrants en masse will be good for the American jobs market is fundamentally unsound.

First, it is far from clear that undocumented workers even take jobs from American workers. Moreover, the US economy is not a set of unrelated, parallel causes and effects, but a complex ecosystem in which one dramatic change can alter the entire environment.

She also pointed out that the six states with the highest concentration of undocumented workers account for 40 percent of all the goods and services produced in the country.

“Undocumented workers often fill low-wage jobs such as maintenance and farm work,” she said. “Labour shortages could lead to an inflation spike due to severe upward wage pressures.”

While American workers could undoubtedly use a raise, a sudden and dramatic wage “spike” can have a destructive ripple effect.

Take the example of your weekly grocery bill. If Trump’s crackdown on undocumented immigrants leads to a shortage of farm workers, employers will probably have to raise pay to attract new ones.

Growth is good for an economy. The more it grows, the more jobs are created and the more workers can demand a decent wage and job security.

That cost can be passed on to consumers in the form of higher food prices. And struggling Americans do not need to pay more for a litre of milk or a head of lettuce.

Of course, grocery stores could choose to substitute expensive homegrown fruit, vegetables and dairy for less expensive imports, but while that would spare consumers’ budgets, it could drive US farmers out of business, which would destroy jobs. That’s the economic ecosystem.

There is also the broader economy to consider when gauging the potential impact of dramatically escalated deportations.

Growth is good for an economy. The more it grows, the more jobs are created and the more workers can demand a decent wage and job security.

OPINION: Immigration should not divide black and Latinx people

The future of the labour market hinges on innovation, which is crucial for keeping the US economy competitive in a globalised world. In his address to Congress this week, President Trump called for a “merit-based” immigration system. Whether the aim is to allow more high-skilled, highly educated workers into the US, or simply to keep out low-skilled ones is unclear.

Either way, between the well-publicised turmoil and courtroom drama surrounding Trump’s ban on immigrants from seven predominantly Muslim nations, reports of revoked visas and over-zealous border control agents threatening, harassing and detaining travellers including green card holders, and the racially motivated, fatal shooting of an Indian engineer in a Kansas bar – which Trump denounced nearly a week after the event – the president’s opening days in office have arguably fostered an inhospitable climate for current and aspiring documented immigrants.

OPINION: How Trump will ‘fix’ the inner cities

That could damage the US economy if it dissuades foreign-born students from seeking degrees in the country. A 2011 study by the American Enterprise Institute, a conservative think-tank, found that an additional 100 foreign-born workers in science, technology, engineering and mathematics fields with advanced degrees from US universities created 262 jobs for citizens born in the US.

If students feel unwelcome or unsafe studying on US shores, there are other countries where they can earn degrees, and settle down to become job creators.

Immigrants are also at the forefront of many cutting edge tech companies. A recent study by the National Foundation for American Policy found that more than half of US start-up companies worth at least $1bn had one or more immigrant founders; a list that includes the likes of Elon Musk’s Space X, which employs around 5,000 people (PDF).

There are those in the economic ecosystem who stand to benefit from Trump’s immigration policies. Firms that build and operate prisons could profit handsomely from the executive order instructing Immigration and Customs Enforcement officials to immediately build and operate new detention facilities.

But weigh that against all the potential negatives outlined above, not to mention the price tag for detaining and deporting undocumented workers and preventing future entry, which the American Action Forum estimated would cost taxpayers between $400bn to $600bn.

It is important to remember that while Trump promised to deport two to three million undocumented workers, there is no hard data yet to prove that mass deportations are under way.

While we wait for the data to roll in, Americans may want to consider what will make the economy stronger in the future: another detention prison or another Elon Musk?

Patricia Sabga is an economics and global affairs journalist based in New York. 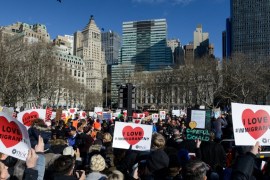 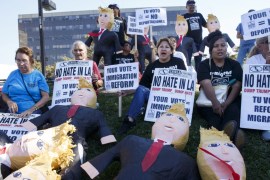 Why women marched on Washington

The economic insecurity behind Trump’s triumph