Yang is China’s State Councillor and a longtime key player in Sino-US ties, with former posts as foreign minister and ambassador to the United States. A statement from the White House indicated that Yang had a brief courtesy call with President Donald Trump.

According to Chinese state media, the visit allowed a space for Beijing and Washington to discuss areas of common interest and for China to ask for mutual respect on “core interests” – a clear signal that Beijing will not walk softly on areas it considers to be sovereignty matters, such as Taiwan and tensions in the East and South China Seas.

The top-level exchange comes only weeks after an ice-breaking phone call between Trump and Chinese leader Xi Jinping, which eased a mini-diplomatic stalemate caused by the White House’s intentional ambiguity over its adherence to the long-standing “one China” policy.

During the phone call, Trump relented on his earlier insistence that the “one China” policy was vulnerable and dependent on Chinese actions.

Beijing reportedly was so irate at Trump’s loose talk on Taiwan that it was prepared to freeze out high-level exchanges until he could come back – at least in principle – to the status-quo regarding cross-strait ties with Taipei.

Meanwhile, the Trump administration seemed to brush-off talk that it backed down to Chinese pressure and Trump’s press secretary, Sean Spicer, insisted that the “president always gets something” for a concession such as this.

Since that Xi-Trump call, though, China has been sending signals to the Trump administration that it is willing to make a deal and find areas of common ground.

Indeed, diplomatic moves have been coming quickly since that point, and there was a meeting last month between Chinese Foreign Minister Wang Yi and US Secretary of State Rex Tillerson.

Moreover, Beijing announced last month that it would endeavour to suspend all imports of coal from North Korea, effective immediately, for the rest of the year.

is likely – and indeed prudent – the notion of a grand bargain between the US and China is doubtful for a number of reasons.”]

To give a sense of the magnitude of this, in 2016, North Korea exported 22 million metric tonnes of coal to China, netting nearly $1.2bn in cash for the Kim regime. Beijing is – by far – the North’s largest export market for coal, and Pyongyang depends on China as a trading lifeline, with nearly 90 percent of its trade going through Beijing.

Trump has long railed against China’s lack of genuine effort to rein in North Korea, insisting that he will hit back on other areas, such as trade, if Beijing continues to obstruct Washington’s strategic interests on the Korean peninsula.

On the surface, China’s move on the coal suspension might seem like a significant breakthrough with Beijing finally acquiescing to US pressure to tighten the screws on Pyongyang, which has been consistently and incrementally improving its missile and nuclear programmes over the past few years in defiance of numerous UN Security Council sanctions.

The reality, however, is less definitive and we should be cautious before praising Beijing’s benevolence or Chinese efforts to “constrain” North Korea.

While compartmentalised cooperation is likely – and indeed prudent – the notion of a grand bargain between the US and China is doubtful for a number of reasons.

First, the range of strategic differences between Beijing and Washington is so wide-ranging and deeply ingrained, that it continues to be difficult to acknowledge and acquiesce to each other’s “core interests”.

Second, many of Washington’s most important allies and friends in the region – including Japan and South Korea – are wary of the notion that Trump might be willing to make a compromise on security interests in the region for a selection of economic sweeteners that Beijing might propose to curry favour with Washington.

Indeed, it seems dubious to think that Trump might take a lighter touch on these matters and recent evidence suggests the opposite.

Last month, Japan’s Prime Minister Shinzo Abe and Trump had a very successful summit and doubled down on their security alliance with an even firmer commitment to the Senkaku islands – claimed by China as the Diaoyu Islands – in the East China Sea.

Washington also elevated its extended deterrence guarantees to Japan through explicit mention of its willingness to use nuclear weapons to defend Japan if needed.

Likewise, the Trump administration has made strong commitments to South Korea and remains committed to deploying the Terminal High Altitude Air Defence (THAAD) anti-missile system there by the end of this year.

The THAAD commitment continues despite Chinese anger over the deployment, which it sees as antithetical to its security interests in the region.

Trump has alarmed Beijing through his recent announcement of a significant 10 percent increase in military spending and his maintenance of the Obama administration’s approach to freedom of navigation operations in the South China Sea.

This will probably lead to a scenario over the coming months in which Beijing looks to play at the edges with Washington on a number of key issues – including North Korea and trade – but stand unwaveringly on other issues where it will not compromise, such as the territorial disputes. This makes an appreciable improvement of Sino-US ties doubtful in the near term. 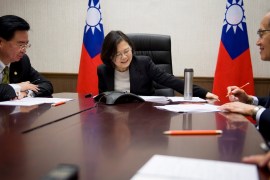