After enjoying a rapprochement with the European Union over the past three years, Belarus – a country with a fluctuating political and human rights record – diverted from this path and returned to its habit of brutal crackdowns on protests.

Since late 2014 Minsk has been demonstrating a political will for liberalisation: It was praised for its role as a mediator in the conflict between Ukraine and Russia, for releasing its political prisoners, and for creating a less aggressive space for political disagreement.

Joining a political rally became mostly safe and a certain level of cooperation between the authorities and the civil society organisations became possible. For instance, local authorities complied with a demand of a political organisation called “Our House” to publish most local budgets in 2015 and 2016 for the first time in the recent political history of the country.

In return for these positive steps, the EU lifted its sanctions against Belarusian officials, offered a variety of initiatives for co-operation and development of the country’s economy, and gave state bodies access to some EU money in the area of civil society building.

This all came to an end in March 2017, particularly March 25, when almost a thousand people were detained, fined, and beaten for publicly expressing their dissatisfaction with how the country is managed economically and politically. The story of these protests started few weeks earlier with the spirit of hope and positivity.

The first protest under the banner “March of the Outraged Belarusians” took place on February 17 in Minsk and attracted between 2,000 and 3,000 protesters. The target of the protest was Presidential Decree #3 (2015), dubbed “the decree against social parasites”, which introduced an unemployment tax for those who officially work fewer than 183 days per year and hence do not participate in the “financing of the state”. Such individuals have to pay the state the equivalent of $250.

Although the decree was released in 2015, the controversy around it did not peak until mid-January 2017, when two major developments happened simultaneously. One, a number of changes to the decree were introduced, including a suggestion to consider housewives with children under the age of seven to be the subject of this tax, if the children attend a nursery.

Two, about 470,000 unemployment tax notices were sent across the country, including to individuals who lived and worked abroad for years. Those who did not pay the tax until February 20 could expect a fine, an arrest, forced labour or withdrawal of permission to go abroad or to drive their personal vehicle. Only 11.5 percent of those who received the notification paid the tax by the deadline.

Following the first march, a number of similar protests and gatherings against the unemployment tax took place on February 19 in all five regional centres of Belarus: Brest, Gomel, Grodno, Vitebsk, Mogilev. A week later, February 26, Baranovichi and Bobruisk joined in and Brest and Vitebsk held more protests. All the gatherings were peaceful.

There were several astonishing things about these protests. First, the gatherings were varied in numbers and in the issues that brought people out – ranging from general dissatisfaction with life to acute social and political problems. Second, they were not disrupted by police. Third, they demonstrated an unprecedented level of social solidarity: despite the main protest slogan being “I am not a social parasite”, many of the protesters, especially older women, would say they joined because they were concerned for others even if the decree did not affect them personally.

The first official reaction did not come until February 28 when President Alexander Lukashenko implied in his comments that “social parasites” are being used by certain foreign powers to their selfish ends. On March 9, the president announced that the law would be temporarily suspended and that protesters should have a safe public space in which to voice their concerns, where “instigators” should be “picked out like raisins from a bun“.

The announcement of the temporary suspension did not stop the protests. On the contrary, the presidential speech was taken by many as an invitation to engage. Between March 5 and 19 at least 14 towns hosted protests, some large, some small.

Belarus’ law enforcement interpreted the presidential statements quite differently. Between March 5 and 13 a number of “preventive” arrests were made. First they took politicians and social group leaders who had said they would hold major protests scheduled for later in the month. Most of them were imprisoned just long enough for them to miss the rallies. Then they took the bloggers and journalists covering the events; then the activists spreading the information about the protests. Finally, they started arresting protesters: more than 50 in Minsk on March 15; about 30 more in other cities.

The most brutal crackdown took place on March 25, an unofficial holiday known as Freedom Day (Dzen’ Voli). The images and live streaming of the crackdown were shocking: old people, barely able to walk, and young women being carried away; young men beaten without apparent reason, protesters taken to hospitals with injuries. Some of the detained people were not even protesters, but unlucky passers-by who were taken by the police during their “mop-up” operations.

To be fair, some police officers seemed to be equally unhappy about the situation: Some helped people get up from the ground or stopped their colleagues from beating protesters. A number of protesters reported that they were released without reports being filed against them; others reported that they were tortured. All in all, some 700 protesters were detained in Minsk on that day alone.

When Western politicians and human rights bodies finally reacted with condemnations weeks after the repressions started, the Belarusian authorities responded that in the context of a growing terrorist threat globally, one has to be particularly cautious. Apparently the lessons learned in Belarus from the terrorist acts in London, Berlin, Paris, Brussels, and Nice are that peaceful protests should be brutally suppressed.

And, of course, there were more detentions on the next day, when a significantly smaller group went out on the streets to express their solidarity with the arrested. Their detention, broadcast live on the independent media, was saddening: There was a sense of doom about them, mixed with stubborn defiance and a lot of emotion, too. As one female protestor from Polotsk noted: “To join [the protests] is frightening, not to join is shameful.”

Evgenia Ivanova is a researcher and an activist from Belarus. She is a Board member and an associate researcher at the Centre for Gender Studies at European Humanities University and a co-chair of the Centre for Gender Initiatives “Adliga: Women for full Citizenship”. Evgenia is an elected Board member of the WIDE+ network.  She is also an editor of a Russian speaking almanac, Women in Politics: New Approaches to the Political. 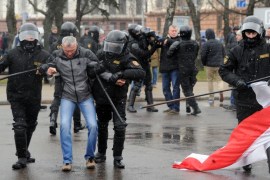 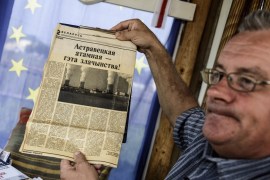