Presidential elections in France have never been as scandalous and controversial as this year’s. But what really sets the 2017 election apart from previous ones is how French mainstream media is behaving itself in terms of objectivity and fair standards of coverage.

In a democratic context, the general objective of media coverage during an election campaign should ultimately be the dissemination of fair and impartial information, through an equal distribution of broadcasting time among all candidates taking part in the elections, as well as an objective and critical analysis of the candidates’ discourses and/or policy platforms while avoiding granting preferential treatment to one candidate at the expense of all others.

By law, airwave time and exposure is monitored and enforced by the state’s Conseil Superieur de l’Audiovisuel (High Council for Audiovisual) which stipulates that the media should “ensure that candidates enjoy fair representation and access to the media space”. However, serious questions can be raised about the media’s compliance with such guidelines in the 2017 elections.

Furthermore, France is now going through tough socioeconomic problems that provide the media outlets with enough material to question different candidates’ platforms and visions in terms of strategies and means that they intend to employ to address these challenges. Rather the mainstream media coverage of the candidates’ electoral campaigns mostly tends to focus on political scandals and trivial issues, such as the prices of Francois Fillon’s costumes and watches, or the daily obsession over the possible scenarios regarding the elections’ second round.

The curious case of Emmanuel Macron

But the most striking example illustrating the media’s complacency and bias is the case of Emmanuel Macron, former Socialist minister of economy under the presidency of Francois Hollande, and now an independent candidate under a social democratic banner.

Framed as “the renewal candidate”, and France’s “saviour”, Macron, who has never been tested at the ballot box, enjoys unprecedented media coverage in France.

Even before he announced his candidacy, mainstream media was reporting on rumours about the announcement of his candidacy. And when the day came, Macron made headlines in major dailies such as Le Monde, Le Figaro, Liberation and Le Parisien, and his announcement was also featured on all major radio and TV stations. For two consecutive days, the national channel France2 reserved half of its prime-time newscast for Macron’s announcements, while the other candidates did not enjoy such coverage.

OPINION: Elections in France – It’s all about security

And in the aftermath of a national TV debate, bringing together five of the 11 candidates, almost all major media outlets anointed Macron as the most convincing personality of the debate. A simple critical look at the debate in question would suffice to see how Macron’s performance and discourse were banal. In contrast, far left-wing candidate Jean-Luc Melenchon, who had distinguished himself during the debate both by his innovative political proposals and his provocative style, did not get the media coverage to match his ground-breaking political platform.

Despite his career at the very heart of the system, and his modest performances as a minister, the question of Macron's supposed lack of political affiliation or of his positioning against the French oligarchy is almost never raised or seriously debated in the media.

So what could justify such bias in favour of Macron and the media’s insistence on constructing popular support around his candidacy? Especially since Macron, presented as an anti-system candidate who has ambitions to revolutionise the French political landscape, is the very product of the system?

Until August 2016 Macron served as minister of the economy under the socialist Francois Hollande’s presidency, and before that he served as deputy secretary-general at the Elysee Palace. In addition, he graduated from the prestigious French National School of Administration and worked as a banker at Rothschild & Co.

In April 2016, the Mediapart, an independent news website, disclosed that the legal address of Macron’s “En Marche” (Onwards) political movement was hosted at the private residence of the director of the Institut Montaigne. The institute is a liberal think-tank close to the Mouvement des Entreprises de France, the largest entrepreneur federation in France which has lobbied against various labour rights.

It is a bit of a contradiction for a man clearly close to France’s top business circles to say that he stands against policies “preserving the privileges of some to the detriment of millions of others”.

The mainstream media has painted a picture of Macron as the only candidate capable of confronting the danger that the extreme right candidate Marine Le Pen poses. But any candidate, whether on the left or right, who enjoys popular support, will be able to win the elections over Marine Le Pen in a runoff.

Some media business tycoons have expressed outright support for Macron. Pierre Berge, co-owner of the newspaper Le Monde, has publicly supported him, while  Bernard Mourad, deputy managing director of SFR Media, which controls L’Express, Liberation, BFM TV and RMC, resigned from his position to join Macron’s election campaign. Such staunch support from media tycoons cannot but influence the content and discourse of the media outlets they own.

This way of promoting a particular candidate and granting him excessive media exposure at the expense of all other candidates is a clear case of media bias. Furthermore, framing the electoral competition as an inevitable duel between only two possible candidates – Macron, who would be “France’s saviour”, and Le Pen, who would be the ultimate threat to society – can only aim to create a sense of urgency among voters to support the former.

Thus a media machine owned by business tycoons is manufacturing popular consent around a candidate supported by financial circles which are far from concerned with democratic ethics or the general population’s interests. 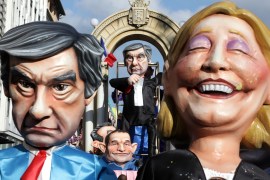