From across the Galaxy, just shy of 40 light years away, seven long shadows sweep across our planet. These shadows belong to the planets of the TRAPPIST-1 system, seven Earth-sized worlds whose discoveries were announced with great fanfare this past week.

Led by Michael Gillon of the University of Liege, an international team of astronomers deployed both space and Earth-based telescopes to make these incredible discoveries: three of the TRAPPIST-1 planets were revealed last year, with the recent announcement unveiling an additional four.

Each world passes in front of its parent star from our point of view, creating those shadows – called “transits” – that dim the light of the star during the planet’s passage.

The transits occur with each lap the planets make around their sun, and by measuring how long it takes between them, we can time the length of their year. From there, it’s just a few calculations to deduce how far they are from their star, whose energy keeps them warm.

The significance of the discovery

It might seem that these days, planet discoveries are a dime a dozen: more than three thousand planets are known around other stars, and their existence implies that there are hundreds of billions of planets in our galaxy alone.

Seven years ago, no one – neither a random person on the street, nor the most learned astronomer – could tell you whether any planets that might be like Earth existed.

Today is a different story: we know from the discoveries of planet-hunting missions like NASA’s Kepler Telescope, TRAPPIST, and a myriad of other projects, that rocky planets must be out there in abundance.

This revolution in planet hunting is certainly incredible, but also begs the question: in a galaxy awash with more planets than stars, what’s the big deal in finding seven more?

As it turns out, the TRAPPIST-1 planet system is remarkable for a number of reasons. For one thing, the star at the system’s centre is exceptionally cool – it emits only around five hundredths of one percent of the energy a second that our sun does, and most of that light is in infrared energy (beyond the limits of human eyesight).

Because the star’s light is so feeble, its planets must be cuddled in very close orbits to be warmed enough to have any hope of liquid water, and this is exactly the case: all seven of the TRAPPIST-1 planets orbit closer to their star than the planet Mercury does to our own sun.

The TRAPPIST-1 planets are so close, in fact, that it takes only a day and a half for the innermost planet to complete its full trip around its star (or “year”), and even the outermost known planet orbits in a mere 20-ish days.

Even the discovery of life beyond Earth is beyond the point: much in the way seeing the skies of a foreign land can make us feel like citizens of the world, coming to know these distant planets will usher us in as citizens of the universe.

Incredibly, three of these planets orbit at just the right distance from their star where they could be the right temperature to have liquid water on their surface.

Not only are the TRAPPIST-1 planets close to their star, they’re also close to each other – so much so that if you were standing on the surface of one, you would be able to see others in the sky, in some cases looming as large as our own moon.

Hints from the timing of these orbits also tells us that the close proximity of these planets was likely not always the case – in all probability, they formed further from their star and moved inwards over time, eventually coming to their current compact arrangement.

Today, the little gravitational tugs the planets exert on each other can actually be seen in tiny differences in how long each planet takes to orbit – these “transit timing variations” appear as the planets’ shadows sweep across our telescopes, either slightly ahead of or behind schedule.

Are we closer to not being alone?

This miniature planetary system is exciting in and of itself – but I know what you’re thinking: do these planets have life on them? Don’t worry, astronomers are wondering that too! Actually, the possibility of answering that question is perhaps the most exciting thing about the TRAPPIST-1 planets.

Right now, astronomers are somewhat limited in what they can learn about planets around other stars, even if they use the best possible tools to study them – we can measure their sizes by how much of their star’s light they block, and deduce how much warming light they receive from their star, but specifics beyond that remain elusive.

When we look for the best places to find life, one of the essential puzzle pieces is what the planet’s atmosphere is like: not only whether that planet has an atmosphere, but how well does it hold in the energy from its star to warm the planet, and does it shield the planet from the high-energy radiation its star showers across it? And of course, the big question: does that atmosphere betray signs of life?

The atmosphere of our own Earth is the product of our living planet: once devoid of oxygen, the rise of blue-green algae over three billion years ago filled our skies with the oxygen that we humans find essential.

The processes of our planet itself – volcanoes, weathering – also affect our environment, and work in concert with creatures great and small to alter the chemistry of our air.

When we think of looking for life on planets around other stars, twinkling at distances still unreachable by even our speediest spacecraft, what we are really thinking of is how to work out what their atmospheres are made of, to uncover “biosignatures”, or signs of life.

As it happens, the TRAPPIST-1 planets are a tantalising discovery for the dawn of a new technological age. The TRAPPIST-1 system has already been observed with the Hubble Space Telescope, whose ability to see ultraviolet light seems to indicate a lack of puffy, distended atmospheres for its innermost worlds, shoring up their status as rocky, possibly Earth-like worlds.

INTERACTIVE: What living in space does to your body

The real opportunity comes next year, when NASA launches the James Webb Space Telescope (JWST). A dazzling new eye on the universe, JWST will look at the cosmos in infrared light, where TRAPPIST-1 glows brightest.

Via these fingerprints in light, astronomers may be able to glimpse the breath of life on planets around other suns. These measurements – requiring our best technology, most careful analyses, and brightest minds, might answer one of humanity’s oldest questions: whether life on Earth is alone in the universe.

In some ways, though, even the discovery of life beyond Earth is beyond the point: much in the way seeing the skies of a foreign land can make us feel like citizens of the world, coming to know these distant planets will usher us in as citizens of the universe.

Lucianne Walkowicz is an astronomer at the Adler Planetarium in Chicago, where she studies stellar magnetic activity and how stars influence a planet’s suitability as a host for alien life. 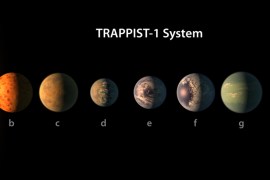 US space agency launches first mission to retrieve dust from asteroid in hopes of learning more about origins of life. 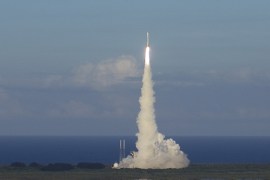