“The battle now is in the final stages,” Iraqi Prime Minister Hayder al-Abadi said on March 14 of the government offensive to retake Mosul from ISIL. “They are cornered, and if they will not surrender they will definitely get killed.”

While the impending combat threatens to be circuitous and uncertain – involving, as it will, fighting among civilians in the narrow streets and alleyways of the Old City – Abadi’s confidence about the final outcome appears to be warranted.

But what will be the broader repercussions of Mosul’s liberation for the Islamic State of Iraq and the Levant (ISIL, also known as ISIS)?

Firstly, on the tactical level, ISIL will continue to devolve into an insurgency – leaving civilians extraordinarily vulnerable. Suicide bombings on soft targets are set to increase, as will attacks on pilgrims, funeral processions and infrastructure.

Unfortunately, ISIL’s leaders will feel comfortable with this gear-change. Many of them cut their teeth as insurgents in post-invasion Iraq, under the banner of predecessor groups such as Al-Qaeda in Iraq (AQI) and the Islamic State of Iraq.

In the summer, as it became clear ISIL would inevitably lose its grip on key territories in Iraq and Syria, a devastating car bomb in the Shia-dominated Karada district of Baghdad killed more than 200 civilians.

The bombing, which was the deadliest explosion to rock Baghdad since 2003, was followed closely by a triple suicide attack at a Shia holy site in Balad.

In the wake of last month’s successful operation to evict ISIL from Sirte in Libya, authorities must surely be braced for the infiltration of Tripoli and other major cities by ISIL sleeper cells.

Indeed, as the Mosul campaign intensifies, it is worth recalling that the 2007 “surge” in Iraq successfully expelled AQI from key safe havens in Baghdad and the Anbar province, yet this tactical degradation never translated into strategic defeat.

The battle for Mosul may be in its final stages, but so long as there is a market for extremist groups to offer protection and livelihoods to vulnerable populations, the shape-shifting war goes on.

Then, as now, the drivers for radicalisation and recruitment – the raison d’etre – were still there: a brutalising combination of grinding poverty and legitimate Sunni grievances against the Iraqi state.

A move to insurgency makes the political track more important than ever, as ISIL seeks to blend in with “host” populations once more. “We rely upon the people to billet us,” as the Northern Irish nationalist Gerry Adams once put it.

The onus on the Iraqi government to reach out to these Sunni communities systematically and meaningfully could not be stronger.

In the crosshairs in Syria

The second impact of the liberation of Mosul will be felt in Syria, where ISIL increasingly finds itself in the crosshairs of both Turkish-backed and Kurdish forces.

Despite its many complications, and the preponderance of competing “cooks”, the battle for Raqqa is undoubtedly entering a new phase.

The Kurdish-backed Syrian Democratic Forces have moved into surrounding villages and cut the supply road to Deir Az-Zor, with the aim of isolating and besieging the ISIL “capital” from all sides.

Furthermore, United States commitment is clear – to serve as a buffer between various rebel factions, as much as to provide weapons, Rangers and air and artillery support.

Finally, as ISIL’s proto-state is assaulted and its men fan out across the region, we may see an uptick of competition with a quietly assertive al-Qaeda.

In Syria, for example, al-Qaeda has been a dominant presence within the armed opposition, operating officially under the banner of Jabhat al-Nusra until July 2016, and unofficially as Jabhat Fateh al-Sham (JFS) since.

Its leaders aim at a genuine grassroots insurgency, and have sought to gradually assimilate into Syrian society.

At the same time, however, JFS is on the verge of open conflict with another Islamist faction, Ahrar al-Sham.

In January 2017, JFS spearheaded an alliance with smaller Salafist groups, known as Hay’et Tahrir al-Sham, making it a formidable player in the country’s northwest.

Ahrar al-Sham, with its more moderate, nationalist orientation has itself taken in a number of smaller factions seeking protection from JFS, and tensions have now reached fever-pitch in Idlib, the last rebel-held province.

At the heart of these divisions is the peace process with the regime, a stepped-up drone campaign against JFS, and a blame game over the fall of Aleppo. The introduction into this mix of retreating ISIL elements could prove explosive.

In North and West Africa, al-Qaeda is resilient.

Al-Qaeda in the Islamic Maghreb (AQIM) has withstood the chokehold of the Algerian security services, US drones, and the French-led intervention in Mali, to launch a range of attacks in recent years, whether storming a beach resort in Ivory Coast or conducting a low-level insurgency in northern Mali.

AQIM even managed to win back to its tent the rogue commander Mokhtar Belmokhtar, mastermind of the Ain Amenas operation.

From January to June 2016, al-Qaeda-linked groups launched more than 100 attacks in West Africa. Earlier this month, four Sahel-based affiliates announced their merger into a single movement under the leadership of Iyad Ag Ghaly.

Thousands of North African natives have travelled to Syria and Iraq to join ISIL’s ranks – the prospect of their return has deeply troubled security agencies, and must surely rankle al-Qaeda.

In Algeria, AQIM’s birthplace, the ISIL-linked Jund al-Khalifa may be on its knees, but at least two other groups have pledged allegiance to the so-called caliphate. In Tunisia and Libya, where al-Qaeda affiliates are firmly established, ISIL encroachment will continue to generate fierce resentment and rivalry.

ISIL has already proved unable to resist the temptation to challenge al-Qaeda in the Sahel, with its porous borders and lucrative smuggling routes. Hence, in November 2016, the Islamic State in Greater Sahara was formed, led by Adnan Abu Walid al-Sahrawi.

In Yemen, too, ISIL has made cameo appearances in the al-Qaeda heartland of Hadramout province, with deadly suicide bombings in Mukalla, and, separately, Aden, last year.

The battle for Mosul may be in its final stages, but so long as there is a market for extremist groups to offer protection and livelihoods to vulnerable populations, the shape-shifting war goes on.

Alia Brahimi is a specialist in terrorism and political trends in the Middle East and North Africa. 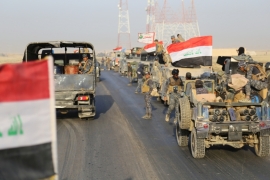 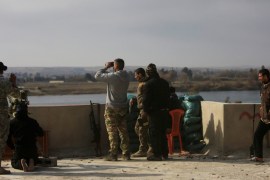