Another week, another world leader flies to the United States to tackle President Donald Trump. This time it’s the turn of Germany’s Chancellor Angela Merkel who has tried to set the tone for the meeting by saying its slogan will be “one-on-one conversations are always much better than talking about each other”.

Truth be told, the two leaders have had some things to say about each other. Trump laid into Merkel’s migration policy during his election campaign, predicting riots and declaring that the German people would end up “overthrowing this woman”.

She also lambasted Trump’s ban on refugees and citizens of seven Muslim-majority countries – unlike, say, Britain’s Theresa May, the first foreign leader to visit Trump.

Responding to the ban in January, Merkel said the fight against terror “does not in any way justify putting groups of certain people under general suspicion”.

Merkel, who is standing for a fourth term in Germany’s September elections, takes a list of issues to the White House: Russia, Syria, Ukraine, Nato as well as trade – the US is Germany’s third largest trading partner, after China and France.

Trump, with his protectionist claims of “America first”, his tirades against Nato and praise for Putin, also seems to want the European Union to crumble. The brash billionaire is, in other words, an affront to the values that Merkel holds dear.

Commentators who have followed her political career portray an experienced pragmatist who knows how to handle Trump types.

The German weekly news magazine Der Spiegel notes that she didn’t exactly hold former Italian Prime Minister Silvio Berlusconi – the billionaire media tycoon of “bunga bunga” sex party fame – in high regard either, yet nonetheless got what she wanted from him politically .

But the problem is that Merkel’s White House visit carries a weight of expectation far beyond her remit. That’s because ever since Barack Obama stepped down, many have cast Merkel as the new “leader of the free world”.

Leaving aside the anachronistic silliness of this job description, it seems part snub to Trump as not fit for the job, and partly the need for a superhero leader to stand up, on a global stage, for the progressive values that Team Trump is so gleefully battering.

Obama’s final presidential visit to Europe, to see his “closest ally” Merkel, was read as a passing-of-the-liberal-baton situation. Even then, the German chancellor dismissed such claims as “grotesque and downright absurd”.

Victory will come ‘from the bottom up’

So it is worth pointing out – and it seems the German leader would not object – that Merkel is not the great progressive messiah of our time.

It’s not just that she heads the Christian Democratic Union Party, defined as centre-right. Try telling Greece, Spain or Italy that Merkel’s inflexible, austerity-as-law response to the eurozone crisis was in fact prompted by progressive values.

In 2015, with Greece buckling under the crushing austerity cuts demanded by Merkel, leading economists warned that such medicine, imposed from Germany and Brussels, had “bled the patient, not cured the disease”.

The fleeting, feelgood factor of seeing global leaders such as Merkel stand up to Trump is a diversion unless any hope it generates is ploughed into something more substantial.

Meanwhile, those who praised the chancellor’s decision to accept a million Syrian refugees were far less enthusiastic at her ill-fated deal with Turkey’s Recep Tayyip Erdogan to stop migrants from reaching Europe – and returning any that had reached Greece back to Turkey.

You could argue that this absence of progressivism, the inflexibility and a lack of collectivism on both the economic and the refugee crises gave the far-right a convenient target on which to focus their attacks against the European project.

In the face of a far-right surge, we crave a progressive figurehead, an inspiring, charismatic type with rhetorical flair, someone who will fight with fine words – if not in fine deeds – the wave of xenophobia, nativism and illiberalism apparently sweeping the West.

In our desperation, it seems anyone will do. This, presumably, explains why George W Bush – yes, the man responsible for the Iraq invasion, torture and Guantanamo Bay – was cast as some sort of liberal saviour when he said of Trump: “I don’t like the racism.”

But espousing left values while at the same time promoting austerity is progressive in rhetoric alone: it doesn’t bring solutions to real economic problems and, worse, fuels alienation and resentment by failing to doing so.

Our focus would be better placed in politics at a community level, building the kind of solidarity and practical networks that might allow genuinely progressive leaders to rise and promoting necessary popular support for such figures once in power.

In this context, the fleeting, feelgood factor of seeing global leaders such as Merkel stand up to Trump is a diversion unless any hope it generates is ploughed into something more substantial.

A pushback against the far-right is a longer, slower fight – and it is more likely to be won at community level, from the bottom up. 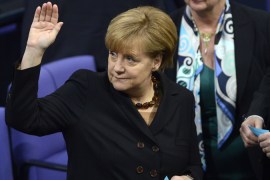 The world according to Angela Merkel

The world’s most powerful woman is redefining Europe. 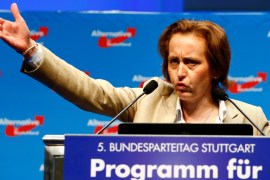