The Muslim ban did not happen in one day – and it means more than one thing.

The Muslim ban did not happen last January or later in March. It happened a long time ago – day after day, piece after piece, one slander after another, systematically, consistently, with liberal laughter and conservative malice alike.

The Muslim ban was Trump’s triumphant finale of a chorus long echoed in the sinuous xenophobic labyrinth of a nation always in denial of its own foreign origin, too eager to imagine and identify itself as “white” to demonise and expel from the shadow of its own fears all its colourful differences.

Trump is no aberration. Trump is a culmination. He is a salesman. He knows what sells in the United States, and he sells the cultivated hatred of Muslims because he knows he has customers.

From Michele Bachmann and Pamela Geller, to Bill Maher and Sam Harris, from Bernard Lewis to Daniel Pipes, all have been drumming up customers for Trump’s fearmongering against Muslims for a very long time.

Laser-beaming on and demonising Trump for taking full advantage of marketing conditions, the liberals and conservatives have come together to create the conditions that have allowed Trump’s xenophobia to flower in even more bitter and stranger fruits.

The known and unknown Muslims

The Muslim ban is not merely against those unknown numbers who can no longer come to the United States. The Muslim ban is far more a condemnation of those known Muslims who are already here – immigrant, naturalised, or US-born.

It is to suspend their constitutional protections and Bill of Rights, turn them into strangers in their own land if they are naturalised or US born. It is to wag Trump’s finger at them and all other Muslim immigrants and tell them that they will never be “American”.

The Muslim ban is here to intimidate, frighten, and silence them into obedience, leading to the eradication of any trace of their character and culture. They will not be allowed to add their sign and signature to what it means to be “American”. As a noun, “American” is and it is to remain white.

The Muslim ban is here to make an example of them for any other non-white, non-Christian immigrant, never to dare to stand up and claim a pride of place.

Every man, woman and child must look like Trump and his family – speak as they do, think as they do, dye their hair blonde if they have to, starch their skin white, wear colourful contact lenses if they must and preferably sport Ivanka Trump’s merchandise to prove their patriotism.

The Muslim ban is the first strike towards the militant whitening of America.

“A close look at what the administration has been doing since the now-infamous executive order was issued on January 27 – banning travellers and refugees from seven Muslim-majority nations,” it has been rightly suggested , “reveals a clear intent from Trump’s inner circle to depopulate the United States of Muslims.”

The depopulation of Muslims is the singular sign of an ideological project for the systematic ethnic cleansing of America.

Calling Trump’s immigration policies “ethnic cleansing” has been in the air soon after his election and even before he assumed office and began implementing his vociferous campaign promises.

We are an affirmation - all in our own differently defiant ways and our very existence is the undoing of the very pernicious myth of 'white people' that for the longest time has sustained the unending course of conquest and plundering of this forever immigrant country.

Taking a page from the Zionist playbook, Bannon has expanded the puritanical epithet to white Christianity in the US: “When two-thirds or three-quarters of the CEOs in Silicon Valley are from South Asia or from Asia, I think … a country is more than an economy. We’re a civic society,” he is reported to have said.

That “civic society”, that “nation”, for Bannon and his fellow storm troopers is white, it is Christian and it is now militantly triumphalist.

It is imperative to see the Muslim ban as integral to the rest of Trump’s white supremacy project for America as an exclusively White Anglo-Saxon Protestant (WASP) “nation”.

We Muslims now – as have Native Americans of this land for ever, then blacks, followed by Latinos and Asians – pollute Bannon’s puritanical white supremacy conception of “his nation”.

For him we have become the pariah, the untouchables, the Dalits, outside the fourfold of humanity. The Muslim ban declares Muslims as Muslims as “bare life”, as Italian critical thinker Giorgio Agamben calls it, we have become “homo sacer”.

The Muslim ban is therefore immediately related to the proposed building of a wall along the US southern border specifically designed on the Israeli apartheid wall keeping Palestinians outside their own homeland.

Muslims and Mexicans are now the two bookends of the Trumpian dystopia. But there are many other layers in between.

The Muslim ban is equally integral to the systematic gutting of the public schools by Trump’s Secretary of Education Betsy DeVos for these schools primarily cater to the poor and disenfranchised among black and Hispanic communities.

She intends to keep these schools underfunded, dilapidated, dispirited, so they would not educate and raise the next generation of visible citizens with a sense of civic responsibility.

DeVos’ conception of public school is the self-fulfilling prophecy of all supporters of private schools for the rich and mass incarceration for the poor.

She wants to see those who go to public school disappear from the public scene and and locked up in prisons, as her boss wants to see Muslims and Mexicans go back to where they came from and make America safe for white supremacy.

“White people” is a fiction

The Muslim ban is equally integral to the continued theft and desecration of Native Americans’ sacred lands for the sustained course of corporate greed leading the cause of predatory capitalism.

He wants them to disappear from the public sight as his supporters oppose seeing Muslim mosques or Jewish synagogues in public sight.

This is what Trump and his neo-Nazi-like alt-right stormtroopers like Stephen Bannon, Stephen Miller and Sebastian Gorka, now all gathered at the White House will and want and intend – and the more they unleash their violent racism against all of us, the more the necessity of not allowing him to play one non-white group against the other.

We are not “non-white”. We are not “their negro”, in the immortal words of James Baldwin. We are people. We are not a negation. We are an affirmation – all in our own differently defiant ways and our very existence is the undoing of the very pernicious myth of “white people” that for the longest time has sustained the unending course of conquest and plundering of this forever immigrant country.

“White people” is a fictional code-name for one particularly violent group of settler colonialists who are dead-set determined to repress the fact that they are as much immigrants to this land as everyone else. 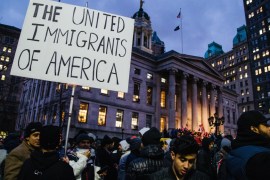