The union that binds together the four political entities within the United Kingdom has never been more at risk. What nobody in the English political and media class seems to have realised is how badly England will fare if Scotland, which is more than likely, and Northern Ireland, which is plausible though by no means certain, split off.

It will be the end of England – the dominant power of the UK, when the term “Little England” will really come into its own.

Almost exactly two and a half years ago, the Scottish electorate decided against leaving the UK. They were told by pro-union campaigners that if they did vote to leave Britain, they would lose their membership of the European Union.

At the time this was probably true. There was no incentive for European decision-makers to allow accession for Scotland, not least because it would embolden Spanish Catalonian independence, and therefore Spain at least – perhaps Belgium too – would veto Scotland’s membership.

Now the circumstances have changed. Britain has voted for Brexit, but Scotland did not, with just 38 percent of Scottish people voting to leave the EU. In contrast, 53 percent of the electorate in England voted to leave.

As Brussels reckons with the result, the European project is looking shakier than ever. What better way to bolster its reputation than for European leaders to say: “Well, England – you voted to leave, and best of luck to you. Scotland, welcome to the party.”

The Labour Party leader, Jeremy Corbyn, has said it would be “absolutely fine” if one took place. The Scottish National Party leader and First Minister of Scotland, Nicola Sturgeon, has already said a referendum is “highly likely”.

Would the independence movement win, though? The prevailing narrative among the chattering classes of London is no; but they are wrong.

They base their arguments largely on the collapse in oil price, an industry upon which the Scottish case for independence had originally rested.

Post-Brexit Scots originally looked as if they would vote pro-union once again in a second referendum but, as the negotiations draw closer, support for independence is now beginning to creep up.

READ MORE: Can Nicola Sturgeon turn Brexit into an opportunity?

English manufacturers, who are actually benefiting far less from a collapsing pound than was expected, need access to the European single market. Relocating to an independent Scotland, which is close by and helpfully speaks the same language, would be an easy choice.

Unfortunately, for every factory that ups sticks and heads over the border, that is one less factory, and fewer jobs, left in England.

What of Northern Ireland? The case for their independence – or joining Ireland, known as republicanism – is clearly being felt by the public.

The sudden and remarkable rise of Sinn Fein in the recent elections – an explicitly republican party – is perhaps evidence of this.

For the first time, parties who want Northern Ireland to remain part of the UK no longer have an effective majority in the parliament.

This could take the form of custom spot checks, not dissimilar to arrangements between Norway and Sweden, or it could be that Northern Ireland is given special access to the customs union that England will not enjoy.

The other option, less likely but not implausible, is that Brexit pushes Northern Ireland fully out of the UK. If so, no doubt some of those same manufacturers considering a move to Scotland, not to mention financial firms, might alternatively hop across the Irish Sea.

Already, more than 100 major financial firms are said to have made inquiries with Irish regulators about such a move. Either way, uniquely across the UK as it stands, far better access to the largest free trade bloc in the world will be enjoyed by Northern Ireland than by its English counterparts.

What is remarkable about all this is how little interest the London-centric media is showing in the imminent break-up of our country, not to mention that England is facing a long-lasting economic challenge when compared to her national siblings.

There have been some exceptions. Adam Boulton, a high-profile commentator and columnist, noted after the shock gains of the pro-Remain and pro-republican Sinn Fein party in the Northern Irish elections that “the almost complete absence of reports in London-based ‘national’ newspapers on the Northern Ireland election shows the capital is barely aware of what’s going on across the Irish Sea now the bombs aren’t going off,” predicting that “restless Ulster may beat Scots to the exit”.

Woe betide their boorish arrogance - Little England may end up being the big loser of Brexit.

The increasingly imperious new Prime Minister, Theresa May, also seems oblivious. “Politics is not a game,” she jeered when she visited Scotland for her own party’s national conference in early March, as if a country that produced the highest turnout in British electoral history since universal suffrage, at the last independence referendum, needed reminding of this.

She chided the SNP for wanting another referendum, accusing them of petty electioneering.

OPINION: Scotland is trapped in a zombie union

The Labour Party were also in hot water for sending their London mayor north to accuse the Scottish independence movement, which is hugely pro-immigration, of playing the same divisive politics as Donald Trump.

The disconnect is extraordinary, but understandable when you consider how Little England increasingly looks in on itself alone, even to the detriment of the other political entities in the UK. Woe betide their boorish arrogance – Little England may end up being the big loser of Brexit. 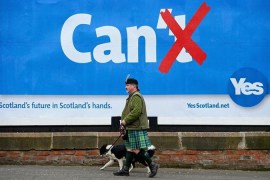 As Scotland prepares to vote on independence, what would a ‘Yes’ vote mean for the UK’s standing in the world?