After months of political uncertainty and intense protests and division in South Korea, the constitutional court in Seoul reached a decision this past week to uphold the impeachment – from last December – of President Park Geun-hye.

The demise of Park finally closes a messy chapter of Korean politics, which showcased the disgraced leader ensnared in a bizarre and very public scandal involving her collusion with a friend, whom she used as an unsanctioned political adviser.

The nightmare is not over now for the former leader either, as Park now likely faces criminal charges on bribery, corruption and embezzlement.

On one hand, the court’s decision has allowed the country a penultimate democratic moment after millions of South Koreans took to the streets over the past few months to denounce Park and the charges of political corruption and the nexus with the Korean business conglomerates – referred to as “chaebol” in the country.

Samsung – long the corporate flag-bearer for South Korea’s remarkable economic growth over the past two decades – has had its reputation soiled through the scandal.

The corporate giant’s chairman and corporate princeling, Lee Jae-yong, has been charged with bribery, embezzlement and perjury and – if convicted on all fronts – could face up to 20 years in prison.

Samsung is accused of paying nearly $40m to Choi Soon-sil, the infamous unsanctioned friend and adviser of Park, in order to secure political favours.

An opportunity for cleansing

In this sense, Park’s impeachment and the public airing of South Korea’s dirty laundry – such as the long shady nexus between corporate and politic interests – provides an opportunity for the country to heal and learn from the difficult and internationally embarrassing episode.

This may provide the political drive needed to cleanse South Korean politics from its institutional traditions and practices vis-a-vis the chaebol.

But the reality is that this is much easier said than done – and the lack of appetite for true progressives, in addition to acute international and security pressures, will constrain the pace of South Korea’s evolution past the Park era.

How are things slated to shake out in the coming months? First, Park’s impeachment has now officially kicked off a sprint to an election for a leader in South Korea, with an election likely to take place on May 9 – 60 days following the court’s ruling as per constitutional laws.

While time is short for Park’s successors to officially campaign for the post – the election cycle has already been in full swing since Park’s impeachment last December, as most experts believed that the Constitutional Court would uphold the National Assembly’s decision on impeachment.

In the wake of Park’s scandal there have been tectonic political shifts in Seoul and it looks likely that her successor will be left of centre.

Moon Jae-in is the current front-runner in the polls – with 32 percent – and his political comeback would be a remarkable turnaround after his crushing loss to Park during the presidential election in 2012.

Moon, the former chief of Korea’s centre-left Minjoo opposition party, has advocated for tougher controls on the chaebols in the wake of Choi-gate scandal.

Regardless how the election campaign develops in the coming two months, it seems that the dye has been cast against the conservatives in South Korea.

Moon, who would be the first liberal leader in nearly a decade if elected, has also pressed for a more dovish approach to North Korea and has promised to look at re-opening the Kaesong industrial complex with Pyongyang.

Moon has similarly been sceptical about the tougher approach taken by the Park administration on North Korea – such as their decision to deploy the controversial Terminal High-Altitude Area Defence (THAAD) anti-missile battery, a move that has created deep tension with China.

Aside from Moon, other potential candidates to replace Park include Ahn Hee-jung, the centrist former governor of South Chungcheong province, who is currently running a distant second to Moon in polls with 17 percent.

Interim President Hwang Kyo-ahn, put in place after Park’s impeachment last December, stands in third and faces a difficult challenge to distance himself from the scandal.

INTERACTIVE: The impeachment of Park Geun-hye

Regardless how the election campaign develops in the coming two months, it seems that the dye has been cast against the conservatives in South Korea and it is almost a certainty – unless there is a dramatic scandal or incident – that there will be a progressive leader in the Blue House later this spring.

This may be seen as a triumph of democracy and the ousting of Park has satiated some of her detractors, but the pressure will also soon mount on Moon or whoever else is tapped as her replacement.

The next leader will face a host of intense challenges – both foreign and domestic – including rising household debt, income inequality, regulations on the chaebol, tensions with China and – perhaps most critically – an evolving security crisis on the peninsula with North Korea. The hard part starts now. 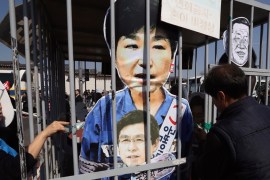 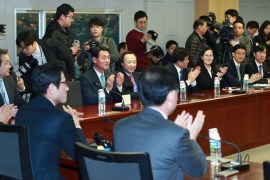