Photos of US Humvees and Stryker combat vehicles patrolling the streets of Manbij are surreal, a reminder that we no longer are under Barack Obama’s restrained doctrine. US generals are now in full control of US policy in Syria.

President Donald Trump is making good on his campaign promise not to tell the Islamic State of Iraq and the Levant (ISIL, also known as ISIS) about his plans to defeat them, yet both allies and foes are puzzled by that new approach.

What is unmistakably true though is that recent changes in the structure, process and tactics of US policy are setting a new tone in northern Syria.

Unlike the centralised approach of his predecessor, the current US president has a hands-off approach – or rather, a preferential treatment – when it comes to the military.

While the CIA halted its coordinated aid to the Free Syrian Army (FSA) last month and the state department is nowhere to be found in either Astana or Geneva peace talks, military commanders have enough margin to decide on launching air strikes and making operational decisions. Having the Pentagon unilaterally shape the Syria policy is the paramount change in Washington.

Next came the change in the US mindset. The new plan to combat ISIL did not inherit the Obama administration’s bewildered approach to Syria.

The long hours at the White House’s Situation Room thinking about the conflict’s nuances and scenarios are over. The only priority now is to defeat ISIL and the betting odds are on the Kurdish-led Syrian Democratic Forces (SDF).

These structural changes in the US decision-making process led to tactical changes that are altering the dynamics of the Syrian conflict.

First, a consensus among influential players in Syria has emerged, outsourcing the parameters of the Raqqa battle to Washington.

The March 7 meeting in Antalya, Turkey, between the US, Russian and Turkish Chairmen of the Joint Chiefs of Staff was meant to confirm the new rules of engagement and to de-conflict operations in a crowded hostile environment.

Second, the US-Russian military efforts in northern Syria are increasingly synchronised at the expense of second-tier powers like Iran and Turkey.

Eradicating ISIL without a political horizon or expanding intervention without a clear endgame merely postpone the looming confrontations across Syria.

The first meeting on February 16 in Baku, Azerbaijan between the Chairman of the Joint Chiefs of Staff US General Joseph Dunford and his Russian counterpart Valery Gerasimov inaugurated this convergence of military interests.

While Iran is sidelined in the short-term, it remains stronger than ever in areas controlled by the Syrian regime. However, the biggest loser in recent weeks has been Turkey.

In a matter of days, Turkish officials switched from threatening to enter Manbij by force to conceding that no Turkish intervention can occur without full coordination with US and Russia.

Indeed, the messages were heard loud and clear in Ankara. The US reacted to Turkish threats by deploying special forces while Russia brokered an agreement in which the Manbij Military Council delivered eight villages west of Manbij to the Syrian regime as a buffer zone to prevent clashes between Turkey and the SFD.

Both moves by Washington and Moscow are somehow complementary to protect the back of SDF, so it can focus on the Raqqa battle.

After the military victory in Al Bab last month, Turkish troops have no place to go. All the routes to Raqqa from Manbij, Tel Abyad and Ain al-Arab must go through Kurdish-controlled areas.

The only accomplishment of the August 2016 Turkish incursion into northern Syria remains splitting the Kurdish cantons in half and preventing a unified Kurdish federation along the border.

Last year, when the SDF crossed the M4 highway to the west bank of the Euphrates River to capture Manbij, it had a clear US mandate to cut off the last supply route of ISIL from Turkey.

The recent show of force in Manbij meant, above all, to preserve the US priority of launching the Raqqa battle and not get distracted in shenanigans of identity politics.

The new sheriff of Manbij has three rules: no hostile action against the city (that is to say Turkey, Russia or ISIL); no “persistent” YPG presence on the streets; and lastly “enhance local governance”, which is an ambiguous task with long-term implications.

While Russia’s approach is more tactical, seeking a long-term involvement in Syria, the US is looking for quick fixes.

Eradicating ISIL without a political horizon, or expanding intervention without a clear endgame, merely postpone the looming confrontations across Syria. The most daunting challenge is to plan ahead for post-Raqqa liberation.

Deploying a disengagement force in Manbij will go down as the most consequential moment in US policy since the invasion of Iraq in 2003.

Yet, this move is not without ramifications and it does not mean that US troops are immune from an attack, now they are visible and no longer in support posture only.

Interventionism is addictive, it starts with a simple task and one thing can lead to another. By next year, we might look back and say US direct involvement in the Syrian war began in Manbij .

Joe Macaron is a policy analyst at the Arab Center Washington DC. 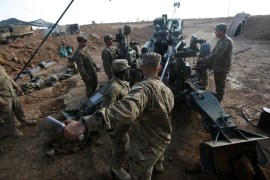 Several hundred marines sent to prepare for battle to push ISIL out of its de facto capital, Raqqa, in country’s north. 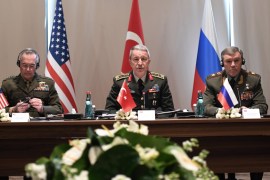