Ever since Francois Fillon was elected as the French conservative party, The Republicans, candidate for the upcoming presidential elections in May, he has been caught up in a controversy surrounding his wife’s “fake job” as an assistant parliamentarian between 1998 and 2012 earning around $960,000 during that period.

While the practice is legal (the French law allows parliamentarians to employ their relatives in paid jobs), yet, it remains ethically questionable in a country where unemployment rates are high and the political class that constantly exhorts citizens with statements on the need to cope with the dire economic situation.

However, as the presidential race heats up, the real question is not only whether Fillon’s wife did the work she was paid for or not, but, whether what Fillon did was an exception to the French establishment’s practices?

Such scandals are rampant within the French political sphere; nevertheless, what sets the Fillon’s affair apart is its complete contradiction with the values the seasoned politician has been preaching during the course of his political career and electoral campaign.

Recently, Fillon was ironically quoted, during his primary debate with Alain Juppe last November, as saying: “One cannot lead France if one is not irreproachable.”

In another statement regarding job’s remuneration, Fillon emphasised: “There is social injustice between those who work hard for little and those who do not work and receive public money.”

Herein lies the significance of the Fillon scandal, especially since his political rivals and the mainstream media merely report the scandal’s twists and turns as though it was a reality TV show only wondering when Fillon will withdraw from the electoral race, without raising serious questions about the legitimacy of a politician running for election when such accusations are filed against him or her.

This being said, and although such practices are morally and politically reprehensible – regardless of who is accused – this affair is a prototypical case of political career assassination.

It also serves as a strong indicator of the internal power struggle within the French ruling elite, particularly as the timing of exposing the Fillon affair in the satirical newspaper Canard Enchaine cannot be out of sheer coincidence, since the alleged “fake job” dates from more than 10 years ago. It is to be noticed that the revelations came out immediately after Fillon was elected as the candidate of the conservatives to the presidential elections.

Whoever chose the timing to reveal such information to the weekly satirical newspaper only three months before the presidential elections date and in the middle of Fillon’s electoral campaign, intended either to smear Fillon’s reputation – and therefore eliminate his chances to win the elections – or was it a case of civic conscience?

The Fillon affair reflects the very essence of an oligarchic system dominated by powerful ruling elite that takes advantage of the political and/or administrative functions to serve its own financial interests and maintain its privileges with total disregard to the society's dire economic situation.

If so, why has this imagined “good citizen” waited this long to reveal the information? The judicial inquiry should clarify this.

Another point of contention is the rapidity with which the judiciary reacted. On the very day the newspaper published the scoop, a judicial inquiry was initiated and the following day witnesses were summoned.

This has not been the case in previous high-profile corruption cases, such as the so-called Cahuzac affair case – where former budget minister Jerome Cahuzac was accused of fraud – or the case of Marine Le Pen’s chief of staff, Catherine Griset – also accused of fake jobs – where the prosecution had taken months to order a judicial inquiry. This raises serious doubts about the independence of the judicial institution.

Who is the winner?

Equally important, is the question about who actually profits from the assassination of Fillon’s political career? In fact, after the Fillon affair broke out, former socialist – and now self-declared social-democrat candidate – Emmanuel Macron’s popularity witnessed an important boost.

The latest opinion poll puts Macron in first place ahead of Le Pen in the election’s first round, while Fillon, before the scandal broke out, was first and ahead of Marine Le Pen in almost all opinion polls and predictions.

Macron’s ascendancy occurred in parallel with a media overexposure favouring him over other candidates, especially since Le Pen did not really benefit from the Fillon affair in terms of voting intentions since she maintained approximately the same score before, during and after the Fillon scandal.

Furthermore, in terms of political scandals in France, there is nothing new – French political modern history is full of such examples: Jerome Cahuzac, former budget minister was recently convicted of fraud and an undeclared Swiss bank account.

OPINION – Elections in France: It’s all about security

Alain Juppe, who, a few weeks ago, was running for the conservative party’s candidate – and former prime minister from 1995 to 1997 – was sentenced in 2004 to an 18 month suspended prison sentence for misusing public funds.

Former French President Jacques Chirac was found guilty of creating fake jobs and embezzling public funds during his tenure as mayor of Paris.

Jean-Christophe Cambadelis, current head of the French Socialist Party was sentenced to a six-month suspended imprisonment for receiving the equivalent of $100,000 in 1995 from a non-profit mutual insurance company.

Even candidate Macron himself – former minister of economy – is currently being investigated by the French General Inspectorate for a possible “offence of favouritism” towards the French multinational advertising company Havas and concerning the organisation of an evening event in Las Vegas in 2016 – during his mandate as minister – where he is allegedly accused of spending about $400,000, of which $105,000 was just for the hotel cost.

In conclusion, the Fillon affair reflects the very essence of an oligarchic system dominated by powerful ruling elite that takes advantage of the political and/or administrative functions to serve its own financial interests and maintain its privileges with total disregard to the society’s dire economic situation.

It also reflects the deteriorating state of France’s “sick democracy”, a democracy of complicity between politics, finance and media.

Never has such a simulacrum and fallacy of democracy been exposed to French public as is the case with the current electoral campaign.

Therefore, it would be naive to think that all the politicians’ hypnotic slogans, and the media noise over Fillon’s case, aim to defend morality, ethics, righteousness and legality.

Conservative candidate for president received interest-free loan from billionaire, who also once employed his wife. 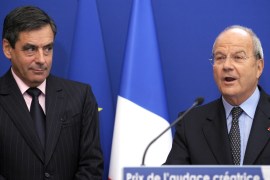 Francois Fillon to be summoned over ‘fake work’ scandal

French presidential candidate Francois Fillon to face court over accusations that he gave his wife a ‘fake job’. 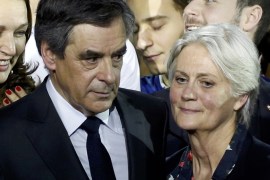