Across the country, there were similar scenes: US‘s largest cities not only welcomed refugees and immigrants, but expressed their pride in being sanctuaries for those looking to create a new life.

Elected officials have vowed to keep their municipalities sanctuary cities, but even the ideology of a safe place for immigrants has come under attack. The Trump administration has threatened to cut federal funding to cities that do not comply with new, stringent immigration policies.

While emergency actions against immediate threats to immigrant rights must continue, we should prepare ourselves for the ongoing impact of a Trump presidency on our cities beyond these most shocking edicts that have been roundly denounced as unconstitutional.

Impact of Trump on immigrant America

Housing, jobs and policing affect all Americans, but immigrants have particular need in all of these areas.

Immigrant justice groups in cities across the nation have been fighting for decades for access to housing, jobs, healthcare and against the expansion of the US‘ growing deportation and incarceration complex.

In the fight for a just and inclusive immigration policy, the tremendous impact of Trump‘s economic plans on immigrant US cannot be forgotten or minimised.

Though immigrants are rapidly moving out of city centres, immigration remains concentrated in urban areas, as 85 percent of foreign born Americans still live in the nation‘s 100 largest metropolitan areas.

Trump‘s economic policies are going to have a massive impact on immigrant US, regardless of the fate of his most shocking executive actions.

In an era where rampant inequality consumes American cities,Trump’s plans to “fix inner cities” threaten to completely gut urban areas. Unless action is taken, Trump‘s city will be uninhabitable to all but the wealthiest.

In Trump‘s city, public housing, a resource which has provided shelter to the most vulnerable, will be a thing of the past.

The appointment of Ben Carson as Secretary of the Department of Housing and Urban Development continues to alarm housing advocates and policy experts. Carson has vowed to deeply cut federal funding to programmes that make housing affordable. In a time where low and moderate-income families can barely afford housing costs, federal funding is vital.

The housing department itself considers households spending more than 30 percent of their income on housing as rent-burdened. This means a substantial portion of American tenants are already rent-burdened.

As Carson plans to slash funds for public housing, this number will continue to rise. For example, New York City’s Housing Authority is home to 700,000 New Yorkers – a population about the size of Boston. In a city where the median rent is $3,185 a month, the loss of public housing will no doubt be devastating.

Like we mobilise to fight the injustices of an egregiously callous and unlawful immigration policy, we must continue to mobilise to ensure that American cities can be places where everyone can live in dignity and without fear.

In Trump‘s city, the number of poor people will increase dramatically. Perhaps most alarmingly, Carson has expressed his view that poverty is a “choice“.

Though Trump ran on a platform of promised job growth, it has been projected that if he follows through with his pledged policies, the US will enter a recession by 2018 (PDF). Economists estimate that real income will remain stagnant at $45,000 a year by the end of Trump‘s term.

In the last recession, immigrants and people of colour bore the brunt of the economic crisis. Families with at least one immigrant family member saw a 38.3 percent decline in total wealth.

By the official end of the recession in 2009, Latinos lost 66 percent of their net worth, Asian American households experienced a 31 percent loss of total wealth, and black Americans saw a 53 percent decline in net worth.

Simultaneously, the tariff on imports, notably from Mexico,will increase US consumer prices by 3 percent. According to the US census, 17 percent of immigrants live in poverty and foreign-born workers, tend to earn 19 percent less than the average wages of their American born counterparts on average.

The impact of a higher cost of living nationwide, coupled with stagnant wages and a depreciation of wealth, will create difficulty for all Americans, but especially newly arrived Americans living in the country‘s already expensive urban areas, to make ends meet.

In Trump‘s city, immigrants will constantly fear deportation or imprisonment, regardless of documentation status. Trump recently signed an order that allows state and local law enforcement to enforce immigration law. The order gives local police power previously held only by federal authorities and essentially legalises racial profiling of anyone suspected of being undocumented.

In Trump‘s city, it will be impossible for any immigrant to survive except for the very wealthy. Immigrants are the heart of American cities. If we are truly committed to the values of our cities, it is vital to fight for the future, to fight for the hearts of our homes and the future of our neighbours.

Just as we mobilise to fight the injustices of an egregiously callous and unlawful immigration policy, we must continue to mobilise to ensure that US cities can be places where everyone can live in dignity and without fear.

How will we develop a political strategy that keeps the most immediate threats in view while also building on the ongoing struggles within immigrant communities? That is the task of the moment.

Lena P Afridi is an independent writer who specialises in income inequality and racial and economic justice. She holds a Master’s in Regional Planning from Cornell University. 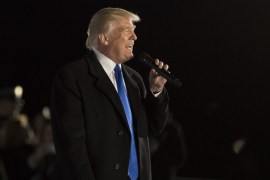