New technologies open new windows for political action. They give new tools to the powerful and their challengers. In the Syrian city of Aleppo, the struggle to frame the conflict for the international community ran parallel to the battle for control over the land itself.

While drone footage from Russia Today showed videos of rebel-held and heavily-bombed eastern Aleppo, Syria’s Ministry of Tourism published footage of the city’s intact western half, complete with the soundtrack from HBO’s hit show Game of Thrones. The contrast was stark. Life with the regime was normal. Life with the rebels was hell.

Monther Etaky remembered that “the regime was always looking down from the drone”. An Aleppo native, working as a journalist during the siege, Etaky and his colleague Abdalrahman Ismail were frustrated by this distortion. They were not alone. They joined a handful of independent journalists to tell the other side of the story.

The next step was as simple as it was familiar to activists the world over: they bought their own drone. Suddenly, the journalists were working simultaneously along two frontlines; one physical and the other symbolic.

“The regime is the greatest criminal on the planet,” Monther told us. With Assad’s planes occupying the skies every day of the past five years, Aleppo earned titles such as the world’s most dangerous city and Syria’s barrel-bomb capital.

This is true in struggles well beyond Syria, as new technologies give regimes new means of control, at the same time challengers gain new tools for documenting abuses and spreading the word about important causes.

Long gone are the halcyon days in which tech boosters could claim that the information highway would deliver the democratic goods.

In the United States, the 2016 election has removed any doubt that new digital technologies cut both ways.

Drones are no exception: most viewed drone footage of Aleppo is not from Monther, Abdalrahman and their colleagues. What folks watch the most is Youtube footage from Russian outlets like Russia Today and Ruptly.

That contrast couldn’t have been clearer, Abdalrahman remembered, “When we are besieged, we, all the time, see the drones of the Assad regime flying over the city,” their footage “telling lies”.

Taking to the sky

A recent analysis of non-violent drone use found that around the world Abdalrahman and Monther’s usage is growing, as drones provide new perspectives on factory farming, industrial animal facilities, environmental degradation, and poaching (PDF).

Drones allow advocacy groups to see over walls, peer deep into inaccessible rainforests, and capture footage from just across town. Indeed, one of the first things Monther and his young colleagues did was to fly a drone over their university, which they hadn’t seen in five years.

Drones allow advocacy groups to see over walls, peer deep into inaccessible rainforests, and capture footage from just across town.

Around the world, drones are taking to the sky, increasing public apprehension about the devices. Syria is no exception.

When they first started flying, people assumed it belonged to the regime, “They said it’s a spy drone, we should shoot that drone down, so it’s not targeting our neighbourhoods.”

Frequent flights and some neighbourly outreach prevented the drone’s downing by friendly fire.

Nevertheless, Abdalrahman and Monther estimate that they lost 20 drones over the course of the conflict. These losses are due to risky flights that basically involves “gambling to take good footage from regime areas,” but they are also the result of the regime’s efforts to shoot down their devices, or jam their control signals.

Such are the basic back and forth struggles between regimes and challengers.

For now, the struggle has subsided, as both Abdalrahman and Monther fled Aleppo as Syrian and Russian troops moved in.

Their departure was marked by a final insult, Monther remembered: “I lost three laptops and a drone – the Russian officer stole it from the bus where I was. As part of the forced evacuation agreement, they were not allowed to open bags – guns weren’t allowed, and I didn’t have guns, but they saw the laptops, which is the worst gun for them.”

The cat and mouse game of emancipatory uses and state control of new technologies plays on. Both men continue their efforts from the northwestern Syrian countryside; only this time without a drone.

AlHakam Shaar is research fellow for The Aleppo Project at the School of Public Policy at Central European University. He studies Aleppians’ narratives of the war and the rebuilding of the city.

Austin Choi-Fitzpatrick is a writer and professor at the Kroc School of Peace Studies at the University of San Diego. He is writing a book about drones and other protest technologies. 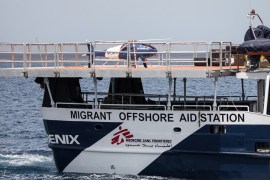 Humanitarian organisations and volunteers advocate for the use of drones technology to locate refugees at sea. 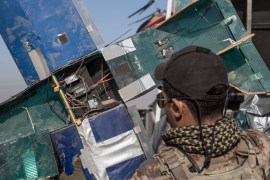 In addition to using drones for reconnaissance in Iraq, ISIL has been sending them out with bombs attached.