At noon on February 2, New York City’s streets were quieter than usual. On Manhattan and Brooklyn corners and down commercial corridors in Queens, corner store security grates were rolled down.

There was no sound of lunch meat sizzling on grill tops, no lines of customers waiting to purchase lottery tickets or cigarettes or toilet paper.

One of New York City’s most recognisable institutions, the bodega, had shut its collective door. A large portion of these businesses are run by the city’s Yemeni immigrants.

Yemenis account for only a tiny fraction of the New York City population, but more than 1,000 corner stores closed during the Bodega Strike of 2017.

On that day, the Yemeni community banded together in response to President Donald Trump’s executive order, which aimed to effectively ban immigration from seven Muslim majority countries, including Yemen.

They shut down their businesses for the day in protest against the Muslim ban, with thousands of bodega owners and allies rallying at Brooklyn Borough Hall in a women-led action at 5pm.

Crucially to the political importance of the day, this action not only protested against the Muslim ban but also expressed resistance to Trump’s promised wall along the US-Mexico border.

This solidarity was coined with the phrase “No Ban, No Wall”, a slogan plastered across shuttered bodega gates citywide. This moment presented the largest explicit show of solidarity between Muslim and Latinx immigrants yet seen in the United States.

Across the US, powerful actions such as the bodega strike are re-imagining old tactics to resist the intersection of racist and anti-working class positions that characterise the Trump phenomenon.

Though sometimes small in size, these actions are quietly building up to a larger possibility: what could be achieved if all Americans stopped work at offices, factories, restaurants, skipped class, and ceased household tasks?

General strikes have been proposed several times in the past decade, with little interest or outright dismissal from those outside unions or leftist circles, and even from many within.

A general strike is not a simple protest. It is a complete shutdown of labour across all sectors, across schools, and – as feminists have insisted – also within homes. It is, as Frances Fox Piven puts it, throwing sand into the gears of the machine .

A general strike brings collective power to the forefront. It has been met with trepidation by many Americans, in particular those people who have the most to gain from such a show of power, and also the most to lose by participating in such a broad scale labour action.

Repression is swift and consequential. Already, some participants of February 16’s Day Without Immigrants protest, where restaurant workers across the nation skipped work, have lost their jobs.

The rise of the Trump administration is a boiling point for immigrants, women, black people, Muslims, indigenous people, queer and trans people, poor and working people, and all people of colour in this country.

However, since the rise of Trump, the buzz around the prospect of a general strike has grown exponentially. Americans, unaccustomed to large-scale labour shut downs, are now entertaining the notion of such an action.

The Bodega Strike, the Day Without Immigrants actions of February 16, and February 17’s nationwide protests against the Trump administration portent both a willingness for action and the capacity to organise for action.

Most successful general strike in US history

The March 8, A Day Without a Woman general strike, proposed by the organisers of the January 21 Women’s March, is poised to be the most successful general strike in recent American history – but only if it continues to carry the momentum of cross-issue organising and solidarity that has begun to develop over the past two months.

It has the potential to be historic not only in size but, like the signs that forged working class Yemeni-Muslim and undocumented Latinx solidarity, it can be historic in its message: it can be a feminist and women’s struggle with issues of racial and economic justice to the front.

The Great American Boycott of 2006 saw millions of people mobilising against HR 4437, the immigration policy that funnelled funds to increased security at the US-Mexico border and made living in the US without documentation a felony – reforms similar to Trump’s recent proposals.

In 2012, the Chicago Teachers Union’s strike led to a 17.5 percent raise for Chicago public school teachers and a reduction in the role of standardised testing as a performance measure.

This past January, as protests erupted in airports across the nation in response to the Muslim ban, New York City taxi drivers went out on strike in solidarity with protesters in organised labour’s first action against the Trump administration.

IN PICTURES: US immigrants stay at home to demonstrate their value

Boycotts and civil disobedience are ingrained into this country’s history of collective struggle. The marches from Selma to Montgomery, lunch-counter sit-ins, and the Montgomery bus boycott were all effective and strategic organising tactics that created a precedent for grassroots mobilisation in the US and worldwide.

Despite the precedence of labour actions in the US, effective general strikes have not happened in this country since the 1930s. The US working class has largely removed itself from the tradition of general strikes.

Though these actions have very recently proved to be effective worldwide, including in Western Europe, in India, where only last year the largest general strike in history took place, and across Latin America, the US labour movement has generally shied away from the general strike as a tactic.

This might be because of the fractured nature of the American labour movement and the weakening of unions nationwide.

Such an action does not need to be called by a union; it can be called by a community, an issue-based group, or just a group of people, such as the Italian Women’s movement of the 1970s.

Although general strikes have been called many times by American leftists, they have ultimately failed in size and scope because they have done little to actually organise with and for those who ultimately have the most to gain, but also more immediately the most to lose, from such actions.

Strikes and boycotts in general have concentrated on pressing and important single issues – whether immigration, women’s rights, labour disputes, or racial justice. However, this particular moment requires an intersectional approach not only in how we talk and write, but also how we organise (PDF).

The rise of the Trump administration is a boiling point for immigrants, women, black people, Muslims, indigenous people, queer and trans people, poor and working people, and all people of colour in this country.

Trump’s policies, on policing, immigration, women’s rights, and foreign policy are frightening, but in each case they are just an extension of past concessions and repressive policies. These are not new issues and they are not new problems.

OPINION: How Trump will ‘fix’ the inner cities

Injustices against marginalised people are very much ingrained in American history. However, this is a political moment where meaningful connections among communities and issues are not only necessary, but actually possible.

In order for a national general strike to be truly meaningful and effective, it must speak to all those that have routinely been silenced.

The March 8 Day Without a Woman strike has the potential to be such an action, or act as a stepping stone to a day where a true American general strike is possible.

Lena P Afridi is an independent writer who specialises in income inequality and racial and economic justice. She holds a Master’s in Regional Planning from Cornell University. 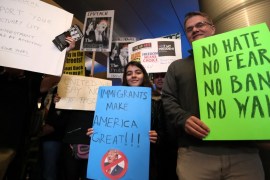 US cities to hold ‘Day Without Immigrants’ protests