As Uttar Pradesh, India’s most populous state and home to its largest Muslim minority community, prepares to go to the polls later this month, seven women gang-raped in a horrific communal violence in the state more than three years ago still await justice.

In September 2013, clashes sparked between the Jat and the Muslim communities in the Muzaffarnagar district of western Uttar Pradesh, after members of the Bharatiya Janta Party made a number of inciting speeches and circulated a fake video of Hindu boys being attacked by Muslims.

During this communal violence, which claimed more than 60 lives, the women from the minority Muslim community were specifically targeted and sexual violence of various forms was unleashed upon them.

It is common for women, who are considered to bear the “honour” of a community, to be specifically targeted during community riots in India, because attackers use violence against women and their bodies as a way to dishonour and shame the entire community they are targeting.

And in many cases, this leads to the “religionisation” of sexualised violence, as women from a minority religion become the sole target of sexual violence.

In Muzaffarnagar clashes, all of the rape survivors who came forward and made official statements belonged to the Muslim community and the men they accused were all from the majority Jat community.

Failed by the legal system

Despite dozens of reports on sexual violence on Muslim women during the Muzaffarnagar riots, only seven women came forward to file a First Information Report (FIR) – a written document prepared by the police when they receive information about the commission of a cognisable offence.

These women, six from the village of Fugana and one from the neighbouring village of Lak, said they were all gang-raped by groups of three or more men.

Amnesty International India recently released a briefing titled, Losing Faith: The Muzaffarnagar Gang-rape Survivors’ Struggle for Justice, which reveals how these women were failed by the delays in the legal system and the lack of support by the state machinery. These women are still waiting for a fair trial and justice.

In their FIRs these seven women said they were raped by men known to them, men from their own villages and they identified each one of their attackers. But continued threats to their lives and their families’ lives led to three of the seven victims changing their statements. There was an acquittal in one of these three cases in January 2016.

“They threatened me, said we will hurt your son. I was scared and I changed my statement and said nothing happened. I did not inform anyone but when others found out they encouraged me to stick to the truth,” one of the seven survivors told me during an interview for the Amnesty briefing in July 2016.

She told me that she chose to retract her statement about the attack in 2013 as a result of continuous threats, but later gave a fresh statement naming her attackers once again and requesting her case to be reopened. It has been more than two years since she recorded her fresh statement, but the trial in her case is yet to begin.

The victims had threats looming over them, received little support from the state and had difficulty in filing FIRs and basic statutory provisions, but they managed to reach out to the Supreme Court in December 2013.

It is imperative, however, to note that all seven, from rural backgrounds in Uttar Pradesh, were only able to reach out to the highest court in the country with the help of human rights activists and lawyers.

Human rights lawyer Vrinda Grover filed a written petition on behalf of the seven gang rape survivors in 2013, demanding compensation, security and the accused to be arrested.

India’s Supreme Court, in its subsequent Mohd Haroon Judgment, ruled that all seven survivors were to be given compensation in addition to other benefits and support. The court also directed the police to provide the victims with security and record their statements before a woman magistrate.

But the Supreme Court’s directions on victim compensation and security were not immediately followed and a contempt petition was filed on behalf of the seven in 2014.

All seven victims, who were displaced from their ancestral villages and lost their livelihoods as a result of the attacks, said in 2016 that they received no financial assistance from the state other than a $7,500 payment, given to them as compensation as rape survivors.

In addition, they told me that they were now trying to take care of the food and lodging costs of their security detail, assigned to them after the Supreme Court decision, while trying very hard to make ends meet for themselves.

Since the communal violence in Muzaffarnagar and the reported gang rapes were the first such incidents to take place after this amendment was adopted, the framework in which these cases are being dealt with would set a precedent for future incidents.

Despite this, the police failed to mention this provision while registering the FIRs of the seven gang rape victims and it was only after the petition filed by the victims’ lawyers that the accused were charged under this section.

Amnesty International spoke to six of the seven survivors between July 2016 and January 2017, all of whom narrated tales of being harassed by the accused men, their relatives and even the investigating officer at that time, who was removed in November 2014 after repeated requests and complaints.

The survivors in various complaints to authorities narrated how this officer would threaten them to take their complaints back and subjected them to humiliation as well.

Human rights lawyer Vrinda Grover, who is still representing one of the survivors, has asked for her case to be transferred out of Muzaffarnagar owing to safety concerns.

“What is it that we are asking the women to do today? We are saying yes, you must stand up, in court, in a rape trial, and give evidence, and your dignity must be vindicated, but for that what should she do? She should either put her own life or the life of her children or other family members at stake. Is that even a demand that should be made by the justice system of a person, not just a woman, and definitely not in a case of a rape,” Grover told Amnesty.

The state elections in Uttar Pradesh begin on February 11. Of the seven cases, there is acquittal in one, the trial has not even begun for two and there have been no convictions in any of the remaining cases. One of the survivors, the trial in whose case had begun, died during childbirth in August 2016, waiting for justice.

While the present state government swears by its commitment to minority rights, the seven survivors have another story to tell.

Mariya Salim was a researcher for the Amnesty International briefing titled Losing Faith: The Muzaffarnagar Gang-rape Survivors’ Struggle for Justice. She is a Kolkata-born Indian citizen with a degree in human rights law from the School of Oriental and African Studies, London. She has been working in the development sector for seven years, with a special focus on women’s rights. 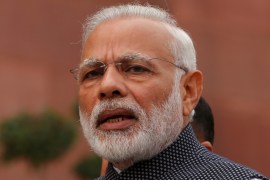 Meghalaya state governor resigns after a petition signed by more than 80 employees accuses him of sexual misconduct. 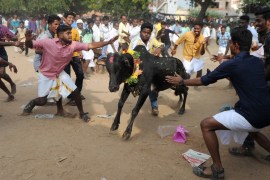 Thousands protest at a ban on an ancient bull-taming festival in Tamil Nadu that animal rights groups say is cruel.