As the celebrations for the 38th anniversary of the Iranian revolution get under way, the ruling elite in the Islamic Republic faces one of its most existential questions: with the death of former President Akbar Hashemi Rafsanjani, who would lead the country if the Supreme Leader Ayatollah Ali Khamenei also passes away unexpectedly?

While Rafsanjani was alive there was a chance that he could control any eventual leadership crisis. With his death last month the scene is set for a possible leadership vacuum and a probable takeover by the powerful Islamic Revolutionary Guards Corps (IRGC), which would groom its own leadership figure.

Khamenei has been ruling for almost three decades and before that he was the president for two terms. As he looks around him, none of his old revolutionary compatriots are alive. Many of that first generation of revolutionary ayatollahs such as Mahmoud Taleghani, Morteza Motahari and Mohammad Beheshti, and now Rafsanjani, are no longer there to carry the authority of Velayat Faghih (Jurists’ Prudence) as set by the architect of the revolution, Ayatollah Ruhollah Khomeini.

So who would be the leader whose word would veto all decisions and carry that authoritarian Islamic leadership based on mass support?

Among the ayatollahs in Iran there are none with the required combined charisma, popularity, Islamic or revolutionary credentials once Khamenei passes away.

There are no powerful opposition voices either to mimic the Grand Ayatollahs Mohammad Kazem Shariatmadari and Hussein-Ali Montazeri, who in one way or another disagreed with the Islamic Republic becoming too authoritarian.

Some of those Ayatollahs were killed or sidelined, as were many of the regime’s modernist ideologues such as Saeed Hajjarian. Reformist Islamist thinkers such as Abdolkarim Soroush and Mohammad Mojtahed Shabestari were silenced and exiled.

As such there has been no regeneration of ideas or the narrative. Khamenei still models himself on Khomeini and almost four decades later he has not as yet taken Iran out of that revolutionary mode.

“The bases of the revolution and revolutionary thinking should be so strong that the death and life of such and such a person will not influence the revolutionary movement of our country,” Khamenei said in the only speech with a vague reference to the issue of succession. In the same speech he designated “outstanding personalities in IRGC” to guard against such eventuality.

Succession amid US tensions

A defining factor in the succession process would be Iran-United States relations, which seem symbolically to be heating up just as both countries remember how they came to confront one another during the Iranian revolution 38 years ago and the ensuing hostage crisis.

Tweets by the US President Donald Trump against Iran gave Khamenei the pretext he needed: “The Iranian nation will respond to your comments with a demonstration on 10 February,” he said, referring to the anniversary procession.

Recent threatening exchanges over Iran’s missile test, increased sanctions or any tightening of the noose over the Iran deal would encourage a more hawkish succession.

President Hassan Rouhani would be sidelined in the forthcoming June presidential elections with IRGC and hardliners pushing for a president that would stand up to the US.

Qassem Soleimani as the chief of IRGC would be well placed to take command of any unexpected leadership crisis.

In theory, Article 111 of the Constitution stipulates that when the Leader dies “a leadership council consisting of the President, head of the Judiciary, and a faqih from the Guardian Council chosen by the Expediency Council” will temporarily take over all his duties.

As things stand, that would mean President Rouhani plus the Judiciary chief Sadeq Larijani and a cleric, possibly the hardline ayatollah Ahmad Jannati (89), who heads the Assembly of Experts.

In practice, neither the 39-seat Expediency Council, nor the 88-member elected Assembly of Experts, which has the duty to anoint a new leader, or the 12-member Guardian Council, which vets the Assembly’s candidates, has any real power.

Their power emanates from the leader. Once he has passed away the IRGC will weigh in to influence the succession, hence Khamenei’s advice.

The IRGC likely to weigh in

The IRGC would prepare its own leadership figure: possibly Qassem Soleimani, the popular commander of IRGC’s elite foreign operations unit Quds Force – with credentials in Syria and Iraq.

Soleimani is due for a promotion. He has been in his post since 1998 and is one of the most experienced among the IRGC’s main division commanders. One scenario is that the supreme leader may, at some stage, promote him to replace the IRGC’s present chief Mohammad Ali Jafari.

This would be in line with his five recent military reshuffles; four in the army and one in IRGC. The former powerful Basij Forces commander, General Mohammad Reza Naghdi, was replaced in December with General Gholam Hossein Gheibparvar.

Soleimani, as the chief of IRGC, would be well placed to take command of any unexpected leadership crisis. He is popular and supported by a major segment of IRGC. Often described as charismatic and authoritative, he is respected enough to unite the opposing sides.

In Syria he is widely credited with delivering the strategy that has helped Syrian President Bashar al-Assad turn the tide against rebel forces. Iraqi officials say he has been instrumental in the ongoing operations to retake Mosul.

Soleimani is, however, not liked by the Americans and is on the US and UK sanctions list (PDF) . He’s also not qualified to become the supreme leader.

All indicators tell us that while Khamenei is alive and well, he would continue to hold on to the status quo while nurturing those he trusts most. Even if Rouhani is not re-elected, he would probably be kept in a key position because of his vast experience, especially in security affairs.

After Khamenei, however, his seat of power would remain vacant for a long while and the ayatollahs and their councils and assemblies would play only a symbolic role.

The IRGC, with might and economic influence, would move centre stage, gradually turning Iran into a military theocracy. That would transform the designation of Velayat Faghih and put an end to the political structure of the Islamic Republic as envisioned four decades ago and as we know it today. 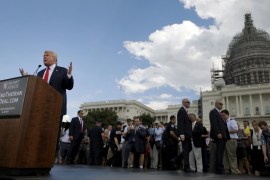