In the print edition of the New York Times Magazine, there’s an ad. It features a fresh-faced young woman smiling straight into the camera, looking totally exploitable. She’s wearing a sweatshirt with $67,928 written across it in large letters.

Below, is the answer: “She did it to work for you.”

It is stunningly, hair-crawlingly creepy.

The ad is for a company that markets the idea of having employers help pay off those loans as a perk. There’s a TV version of the ad as well. The company that came up with the idea has already sold itself to a bank. Far be it for me to say anything a bank does is not for fun, that they must be doing it to make money from money, finding a way to squeeze an additional round of profiteering from what was a terrible idea in the first place.

The company and its clients say there will be no salary cuts. That this benefit is so super special that it will be added on top. There is no reason to disbelieve them except that every study of any other benefit, including employer contributions to social security, concludes that the amounts are actually taken from what would otherwise be paid to employees.

Borrowing for education has become a central pillar of the US economy. “The total outstanding student loan debt in the US is $1.2 trillion, that’s the second-highest level of consumer debt behind only mortgages … About 40 million Americans hold student loans and about 70 percent of bachelor’s degree recipients graduate with debt.” The class of 2015 graduated with $35,051 in student debt, on average.

Why has it happened?

Myth-making – massive and relentless – is a large part of the answer.

Myth #1: Rising inequality in the US is the result of natural market forces. Low-cost foreign labour and technological progress have driven down the wages of “unskilled” labour.

It assigns blame to those foolish, inept, lazy bad-choicers who decided to be unskilled. It’s an extremely useful theory because it says the solution is not about power and politics. It’s up to you. Just go out and get the right education and you are statistically guaranteed to have a higher income.

That would be great for us all, because a better-educated workforce is what the US needs to compete in this era of increased international competition.

If this theory were true – or even if it was false, but our leaders really believed in it – our leaders would have increased our commitment to public education, especially public higher education.

Yet exactly the opposite has happened.

This has not always been true. Tuition at public universities used to be so low that they could be paid for with a summer job or part-time work while school was in session. Some, like the very fine colleges in New York City, were free. All the numbers changed right about 1980, the onset of the Age of Reagan. According to Bloomberg Business, “the cost of obtaining a university education in the US has soared 12 fold [over the past three decades], …[it] surged by 1,120 percent.”

Calculating from a recent CNN story, it would be better than a million dollars more over a lifetime. Other studies throw out figures like a mere $600,000 to $700,000.

It is notable that most of these are either union jobs or in sectors where unions remain, so that non-union employers have to stay competitive.

The myth grew in proportion to the rising costs of education and to the proportion that’s paid for by loans.

Do we think this is about a few bad actors?

It’s a great myth if you’re a tax-cutting, public-service-destroying politician and you want to pretend that policy has no responsibility for declining wages and salaries of the bottom 90 percent. (It’s always a psychic slap in the face to use the phrase, “bottom 90 percent”).

It’s a terrible myth if you fall for it.

What the numbers show from all directions is that income is about power, not about knowledge. If you have a master’s degree but work in the powerless public sector, your salary barely nudges you past the poverty level for a family of four. A blue-collar job with a strong union will make substantially more. The fact is that the first lesson you learn by going to college is to be in debt to the banks, and the last one, as you go out the door, is that you’re going to be a debt slave to a corporation, because we’ve given up our power to educate our children and our society to the financial sector.

If we want to fix it, we have to take power back. 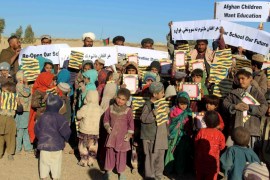 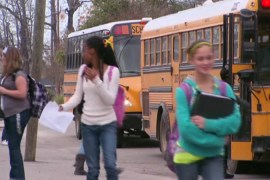 US education badly in need of reform?

As Americans gear up to vote in a presidential election we ask if education is a pressing issue on voters minds.