Jagmeet Singh is the Jackie Robinson of Canadian politics.

Like Jackie Robinson, Singh has broken a stubborn colour barrier. Robinson famously did it in 1947 after becoming the first black man to play major league baseball in the modern era for the then Brooklyn Dodgers. (Robinson spent much of 1946 as an outfielder for the long defunct Montreal Royals.) Singh did it 70 years later, becoming the first visible minority member to lead a Canadian federal political party – the moribund, quasi-socialist New Democratic Party (NDP).

So, consider this: Almost three quarters of a century after American professional baseball began the achingly slow but inevitable move towards integration, one party in Canada – that polite, strutting bastion of progressiveness – finally and belatedly followed suit, electing the first non-white male or female politician as leader of a national party, with designs, of course, to ultimately become the first non-white male or female prime minister.

Canada’s largely monochromatic, male-dominated establishment media noted Singh’s history-making with a perfunctory nod of approval and praise. Then, it reverted with laser-like speed to parochial form, and has, since Singh’s persuasive first-ballot victory on October 1, launched a collective, sustained and hyperbolic assault on his character, religious affiliation and allegiance to Canada.

The unmistakable, unspoken intent of this barrage of smears masquerading as journalism is to stain and indeed shame Singh – and I’m not exaggerating here – as a terrorist sympathizer and conspiracy theorist who is not-so-secretly supportive of the break-up of Canada.

Singh is tasting, once more, the kind of bitter, unhinged vitriol that was hurled at Robinson from the peanut gallery when he stepped into a sports arena decades ago. And like Robinson – who wore a padded baseball cap to shield himself from racist pitchers who threw at his head – Singh has, no doubt, fashioned a means to steel himself against the slur-slinging slanderers yesterday, today and for the foreseeable future.

In the meantime, a gaggle of petty Canadian pundits and television hosts is busy trying to define Singh by the turban he wears, not the passport he carries.

The instantaneous “othering” of Singh began with a now notorious interview with a semi-retired CBC personality turned would-be prosecutor, who demanded to know if the newly elected leader would publicly denounce Sikhs who post “martyr” posters of the murderous architect of the 1985 Air India bombing, Talwinder Singh Parmar – yes or no.

Why Singh was obliged to answer, and by implication, atone for the sins of others, is a question his CBC interrogator did not address. Still, Singh responded to the host’s prosecutorial query by denouncing as a Canadian – without reservation or qualification – all forms of “heinous” terrorism against Canadians.

Alas, Singh’s unequivocal response was not nearly enough for sanctimonious pundits who have suddenly taken an intense interest in a terrorist attack that claimed the lives of 268 Canadians they rarely, if ever, were preoccupied with in the past. Cue the predictably melodramatic columns excoriating Singh for his phantom “failure” to condemn the poster-sized “veneration” of Parmar.

Like Jackie Robinson, Singh, it seems to me, is made of sterner stuff than his pedestrian and forgettable detractors.

Again, this hysterical pile-on is intended to paint a simplistic caricature of Singh as first and foremost a Sikh, not a Canadian, born and raised in Canada. As such, “the Sikh” must be treated with suspicion since he remains an outsider whose faith, not citizenship, is paramount to who he is and what he believes.

Usually, these self-righteous pundits and reporters save their loaded, loyalty-laced questions exclusively for Muslim Canadians who are habitually called upon not only to distance themselves from, but instantly rebuke, fanatics who kill innocents.

Yet, despite ample opportunity, these same pundits and reporters have repeatedly failed to hold other prominent Canadian politicians of other prominent faiths to even a semblance of the same measure of “account” for the easily apparent, well-documented acts of state-sanctioned terrorism visited upon so many other innocents at home and abroad.

Their silence and hypocrisy on this score are as galling as they are instructive.

I cannot recall, for example, former Liberal cabinet minister, supposed human rights “activist” and ubiquitous corporate media darling, Irwin Cotler, ever being challenged by Canada’s accountability-demanding public broadcaster to denounce the indiscriminate killing of more than 500 Palestinian children by the Israeli military – yes or no?

Clearly, the “bravery” of these crowing journalists who applaud each other for daring to ask the “hard, tough” questions has its convenient and career-preserving limits.

But Singh, the Sikh, is easy game.

Not content to tar Singh as a closet terrorist sympathiser, a scribe at Canada’s self-proclaimed “national” newspaper, The Globe and Mail – that, by the way, has ceased publishing in parts of Canada – suggested in a recent column that Singh may be a closet separatist as well.

The amnesiac columnist, Konrad Yakabuski, who once dismissed charges that former Conservative Prime Minister Stephen Harper used racially-tinged dog-whistle politics during the 2015 election as the by-product of “Harper derangement syndrome”, is accusing Singh of pursuing “dog-whistle politics” to curry favour with Quebecers. My goodness.

“Mr. Singh has been upbeat in seducing separatists…[with] wink-wink encouragement,” he wrote. What apparently constitutes the NDP leader’s sly “seduction” of separatists? Singh has simply acknowledged the broad, established understanding that Quebecers have the right to self-determination. My goodness II.

Arguably, the nadir of nastiness was reached earlier this week when a marquee, but transparently thin-skinned polemicist who threatens to sue anyone on Twitter who offends his rather fragile sensibilities, took to Twitter to malign Singh as an “apparent Air India conspiracy theorist”.

Please note: “conspiracy theorist” is a hack’s insipid, stale code for “Singh, the Sikh, is cuckoo.”

Like Jackie Robinson, Singh, it seems to me, is made of sterner stuff than his pedestrian and forgettable detractors. Like Robinson, Singh has not only confronted, but vanquished his detractors with grace, eloquence and fierce determination.

By his telling, Singh has done this since he was a boy growing up in rough and tumble Windsor, Ontario, where he faced and trounced much more formidable foes.

Puffing punks wielding keyboards do not, I suspect, frighten Jagmeet Singh one bit. 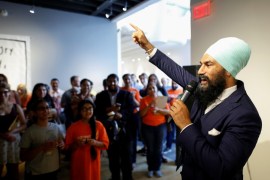 Sikh-Canadian politician becomes the first person of colour to lead a major federal party in the country’s history. 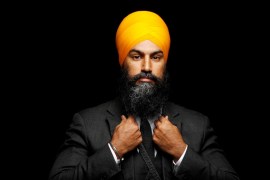 The Sikh-Canadian is on the course of becoming the first visible minority in Canada to lead a federal political party.

Enlightened Israelis must admit Israel is guilty as charged

Donald Rumsfeld was a criminal in a suit and tie