Happy Native American Heritage Month! In this “Make America Great Again” era, where white nationalists (and your nextdoor neighbours who claim not to be white nationalists) rail against undocumented immigration and yearn for the indeterminate days of yore, it’s easy to forget that the United States did not spring up, fully-formed, as a nation of “native” whites.

No, the America of today emerged from lands populated by millions of indigenous peoples – the “first Americans”. Yet, over time, white people in the United States reshaped the definition of “American” and its counterpart, the “foreigner”, to erase indigenous peoples’ primacy and modern-day existence.

The indigenous peoples of North America created bustling cities and impressive empires (13th-century Cahokia, overlooking modern-day St Louis, and the 18th-century Comanche Empire being two examples) before and after they encountered white and black newcomers.

These foreigners carried no immigration papers (unless a papal bull or a magisterial decree count as such) and they kept coming, bearing disease, advanced weaponry, and new systems of labour and gender hierarchy.

Soon after their arrival, Europeans began to differentiate themselves from Native Americans. They labelled Native Americans savages for many reasons: they bathed too often, owned land in common rather than individually, allowed women the freedom to divorce and have multiple sexual partners, traced ancestry through the female line, and on and on. Most importantly, Native Americans largely did not participate in a capitalist world view.

While chiefs and prominent tribespeople often possessed fancier jewellery or clothing than other tribespeople, for the most part, societal economic equality ruled. For these reasons, Europeans speculated, Native Americans did not deserve the lands they presided over. The English, especially, who hailed from a crowded island nation, sought to settle and repurpose indigenous lands for themselves.

Already in the 16th century, the English portrayed themselves as deserving inhabitants versus native peoples’ wasteful unsuitability. In keeping with the English-Christian world view of the time that the land, animals, and environment were meant for human benefit, the English slowly wrested land, resources, and power from Native Americans through war, theft, and inadequate payment.

After years of discord between the English colonies, on the precipice of the American Revolution, an unsettled and much-contested identity as “American” – in opposition to British – was born. Native Americans were left out of the peace talks that followed the revolution, in which European powers divvied up the land on which native peoples still lived.

As the newly birthed United States moved into the 19th century, “Manifest Destiny” reigned, and white Americans claimed indigenous land as their own on their westward trek. Indigenous peoples, still not American citizens at that point, became inconvenient occupants within their own homelands.

The mid-to-late 1800s brought increasing immigration from Ireland, Scotland, Germany, and Italy, and as these ethnic groups, originally targeted as “foreigners” negotiated their assimilation into “whiteness,” scholars and local historians wrote Native Americans into obscurity, claiming they had died out and thus refuting indigenous claims to land and sovereignty.

Even today, while the fervour over the indigenous protests against the Dakota Access Pipeline grabbed headlines and attention due to celebrity participation, the media soon forgot the Sioux peoples whose livelihoods have suffered due to the billion-dollar project.

The latinos/as who have become the face of the undocumented citizenship conversation and the targets of the US Immigration and Customs Enforcement are the descendants of indigenous and mixed-race people who once roamed the modern-day southwestern United States – after all, the Mexican American War was only 169 years ago – not long ago in the scheme of nation-building.

The “America” of old was one in which the mores of immigration constantly shifted and citizenship was not necessarily racialised. But I don’t think that’s the American greatness white nationalists are referencing. 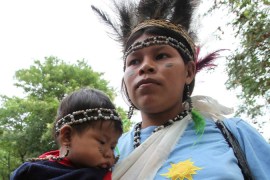 We examine why the Violence Against Women Act is crucial for indigenous women in the US. 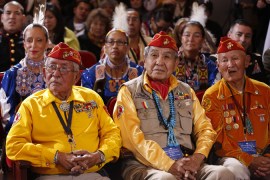 Who is Native American?