Within the deluge of news in the wake of the Las Vegas shooting, one fact seems to have been lost: that America’s bloodiest gun massacre in modern history – with at least 59 killed and over 500 injured – happened in the same city as the world’s largest gun trade exhibition – the SHOT show.

Of course, some would say this is just a coincidence.

But then you find out the organisers of that trade fair are the National Shooting Sports Foundation (NSSF). And the NSSF’s headquarters are in Newtown – the place where, in 2012, Adam Lanza murdered 28 people, including 20 children between six and seven years old at Sandy Hook’s Elementary School.

And some say this is just a coincidence.

Then you read that the world’s most armed nation – the US, with about 300 million guns in the hands of private citizens – has, of all developed countries, the most gun homicides per capita. According to data from the Centers for Disease Control and Prevention, in fact, over one and half million Americans were killed or injured by guns between 2001 and 2015.

That’s seen as coincidental, too. People deny the correlation: that more guns don’t equate to more gun deaths. But, as these facts reveal themselves, you begin to wonder if there is something approaching cause and effect at play.

OPINION: The gun lobby is global: From Yemen to Las Vegas

The SHOT show is a celebration of both the firearm and of capitalism. With about 65,000 attendees and 630,000 square feet of exhibition space, the visitor is confronted with row upon row of carbines and silencers, semi-automatics and revolvers. The mountain of guns for sale at the SHOT show reflects a country where there are few, if any, regulations governing the ownership of guns, and where guns are noted for their ubiquity.

If, for instance, China, Germany, and India were taken out of the equation, America would have more privately owned firearms than the rest of the world put together. A reality brought home with the knowledge that Stephen Paddock– the Vegas murderer – had at least 42 guns in his possession.

America's love affair with the gun also translates into foreign policy. So in love, indeed, that the US government believes they can export democracy down the barrel of a gun.

Of course, this does not prove cause and effect. There have been massacres all over America, and Paddock did not choose to murder people in Vegas because the SHOT show was there. But the profits made from that trade show, and the gun industry in general, enabled Paddock to carry out his murderous crimes.

These profits have been ploughed back into lobbyists and marketeers, selling the lie that more guns make people safer. The National Rifle Association, for instance, poured $36.3m into the 2016 US election campaign, breaking its own record of $31.7m from just two years before (according to data compiled by the Center for Responsive Politics).

Such money talks. It leads to US Senators voting not to close loopholes that allow people to buy firearms without a background check from gun shows or online. All but three of the 45 senators who torpedoed gun control measures in Congress in 2013 had accepted donations from gun lobbyists.

So, for people to say that there is no connection, whatsoever, between a highly profitable gun show and a highly murderous gun shooting is simplistic. It fails to acknowledge that the legal conditions that let a “demented” man like Paddock (to use President Trump‘s description) to stockpile so many guns, were ones created by political lobbying and funding. America is the only place in the world where, following a gun massacre, they have loosened, not tightened their gun laws.

OPINION: When does a ‘crime’ become ‘terrorism’?

The American response to this observation – coming as it is from a Brit – is often: well, it’s our country, if you don’t like it, get lost. But the US love affair with the Second Amendment right to bear arms is not just an American issue: it affects the whole world.

The ease with which guns can be purchased in the US, for instance, has deep consequences. It is estimated over 250,000 guns are smuggled into Mexico and Central America every year. To the north, Canada estimates that 50 percent of the guns used in crime in Ottawa were smuggled across the border. These illicit guns have consequences. In 2015, El Salvador had over 6,650 murders, a rate of about 104 homicides per 100,000. Most were committed with guns – and about 49 percent of the firearms traced in El Salvador that year came from the US. So, yes, America’s guns kill more than just Americans.

America’s love affair with the gun also translates into foreign policy. So in love, indeed, that the US government believes they can export democracy down the barrel of a gun. Over 1.45 million guns were given by the US government to armed forces in Iraq and Afghanistan between 2001 and 2015, of which 285,981 were AK-47s. The Pentagon acknowledges it has lost track of many of them. At least 190,000 rifles and pistols given to Iraqi security forces have gone missing, and 43 percent of the 747,000 weapons sent to the Afghan National Army cannot be accounted for.

Without question, some of these US government-funded arms have ended up in the hands of Islamic State of Iraq and the Levant (ISIL, also known as ISIS) militants. And ammunition magazines identical to those given to Afghan government forces by the US military have been found on dead Taliban fighters.

This is not all. The Second Amendment, and the funded lobby that supports it, has also inhibited effective global gun control treaties. The multilateral Arms Trade Treaty, for example, would have prohibited the US from transferring arms to states that might use them in genocide or crimes against humanity. But Congress refused to ratify the United Nations treaty, in large part because the National Rifle Association claimed it would curtail American citizens’ right to bear arms – something Amnesty International insisted wasn’t true. The world’s biggest arms trade treaty has, then, not been ratified by the world’s biggest firearm producer – a troublesome truth.

The US also stands accused of watering down other UN treaties. Then-Ambassador to the UN John Bolton ensured the 2001 Programme of Action on Small Arms and Light Weapons made no mention of the civilian possession of arms nor the need for laws to control them in the final document. Bolton now chairs the National Rifle Association’s International Affairs Subcommittee.

All of this is why we should see significance in the fact both the world’s largest gun show and America’s worst gun massacre happen in Las Vegas. The profits from one bleed into the political environment that makes the second more likely. And it is not just a massacre in Vegas. It is a femicide in Ciudad Juarez, Mexico. A gangland killing in San Pedro Sula, Honduras. A gun battle in Raqqa, Syria.

Ultimately, this is what we must learn from Las Vegas: that the American right to bear arms can affect us all. That’s not a coincidence – that’s a fact.

Iain Overton is the author of Gun, Baby Gun and executive director of Action on Armed Violence. 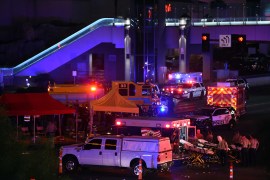 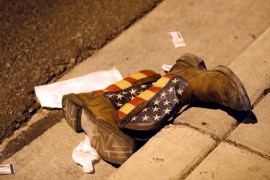 The gun lobby is global: From Yemen to Las Vegas

The Saudis, the Israelis, the Myanmar military and all-American shooters in the US use the same guns to kill innocents.