Since the Catalan government’s decision to stage a referendum on independence on October 1, there has been much comment on the rise of separatist movements across Europe. European Commission President Jean-Claude Juncker warned that the EU could not accommodate 95 member states. Alarm has been expressed about the contagion effect of Catalonia on other stateless nations striving to establish their own state.

There is, in fact, no wave of separatism across Europe. In Belgium, the Flemish nationalist party is part of the national government but has not even insisted on a constitutional reform. It talks about confederalism; independence is, at most, a long-term and rather vague aspiration.

The Italian Lega Nord abandoned separatism years ago and now appeals as an Italian nationalist and Eurosceptic party, seeking votes in the south as well as the north. The recent referendums in Lombardy and Veneto were for more regional devolution, not separation.

There is not majority support in Northern Ireland for leaving the United Kingdom, even among Catholics.The Basque Nationalist Party has moved away from its previous sovereigntist position and instead is looking for constitutional reform within Spain. The only separatist forces in France are in Corsica and, while the nationalists have advanced electorally, independence is not a serious proposition.

Within the European Union, there are precisely two independence-seeking movements of any significance, in Catalonia and in Scotland. In both cases, support for independence is around 40-45 percent. Both are governed by nationalist parties, which have sought to test support in independence referendums.

In both cases, the independence movement has used membership of the European Union as something that would facilitate independence, although European institutions have given them no encouragement.

At present, however, it is the difference between the two cases that most strikes the observer. Scotland’s referendum in 2014 was facilitated by the British government, which decided that this was the best way to defuse a politically explosive situation. It helped that the United Kingdom has a very flexible constitution so that there was no legal obstacle.

The key factor, however, was political. The UK has long been recognised as a voluntary union of nations and successive governments in recent years have recognised that they cannot be kept in the union against their will. This contrasts sharply with their attitude to Ireland and hundred years ago.

The Scottish referendum was won by the anti-independence forces, who gained 55 percent of the vote. While the nationalists were defeated, however, they had demonstrated that they are a considerable force in Scottish society. Neither side had scored a knock-out victory. So, after the referendum, the two sides engaged in a negotiation to produce a compromise of further autonomy for Scotland.

Since referendum of 2014, we have had the referendum on Brexit. While the UK as a whole voted to leave the European Union, Scotland voted, by a larger margin, to remain. The Scottish government has argued that this justifies another independence referendum but it has recognised that permission for this will have to be obtained from the UK Parliament. There will be no legally dubious referendum and no unilateral declaration of independence.

Catalonia has gone into a confrontation that could have been avoided some years ago with a bit of statesmanship.

The contrast with Spain is striking. The Spanish constitution insists on the indivisibility of the Spanish people, a provision that has been interpreted very narrowly by Spanish political parties and the constitutional court. A reformed statute of autonomy was adopted in 2006 with the agreement of both Spanish and Catalan parliaments and a referendum in Catalonia. It was taken to the constitutional court by intransigent Spanish nationalists and key provisions were stuck down. From that point, support for independence grew.

Catalonia has gone into a confrontation that could have been avoided some years ago with a bit of statesmanship. With some recognition of Catalonia’s national status, stronger guarantees for its competences and language and a deal on taxation and spending, the great majority of Catalans would have been content to remain in Spain and Spain itself would have been strengthened. Instead, there has been a series of miscalculations on both sides and a failure to think through the consequences of their actions.

The search for compromise has been hindered by the fact that both the Spanish and the Catalan governments are weak. Neither has a parliamentary majority and both are beholden to their own hard-line nationalists. The Spanish Popular Party and the Catalan PDeCAT (formerly Convergencia) have been deeply tainted by corruption scandals.

Since the contested referendum on October 1, both sides have raised the stakes. The Spanish government has invoked Article 155 of the constitution, allowing it to assume direct control of the Catalan administration. The Catalan Parliament has declared independence. The last opportunity for compromise, in which both acts could have been suspended and new elections called, was refused by Madrid, which opted for invoking Article 155 and calling Catalan elections as well.

Yet even now there are deep similarities between the cases of Catalonia and Scotland, and indeed other processes across Europe. During the Scottish referendum campaign, there was a steady move of voters from the No and undecideds to the Yes camp, which did better than anyone had expected at the outset. Yet underlying attitudes had changed much less.

When surveys offered a choice between the status quo, independence or more autonomy, support for more autonomy regularly came out on top. Many of the people who voted for independence, in fact, saw it as the best way of getting to that middle ground.

Similarly, in Catalonia, there is an underlying support for due process and for moderation. A poll in September showed over 80 percent of Catalans in favour of having a legally-sanctioned referendum on independence.

The same proportion thought that the actions of the Spanish government had encouraged pro-independence forces. A clear majority favoured proceeding gradually towards more autonomy, as the current Basque government is doing. A poll taken after the referendum showed 44 percent in favour of independence (where it has been for the last few years) but, when Catalans are offered the alternative of more autonomy, support for independence falls to 29 percent.

What is happening in Europe is less an outbreak of separatism than a questioning of the model of the unitary nation-state. The government, the economy, societies and identities are rescaling at multiple levels. Sovereignty is, whatever the Spanish constitution proclaims, shared at multiple levels.

Self-determination is about negotiating one’s place in the new multilevel order. It is this, rather than the search for an illusory sovereignty, that the processes across Europe have in common. Catalonia and Scotland are test beds for this new understanding of politics and policy.

There is no clear end to these processes, whether by reconstituting the old nation-state or breaking it up into new and smaller nation-states. In recognising this, people are often in advance of their politicians who, the more they lose the substance of sovereignty, the more they argue over its trappings. 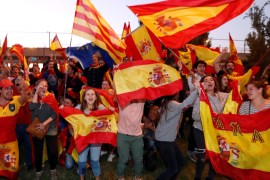 What happens next in Catalonia?

Spain pushes back after the independence vote by firing the government and the police chief. 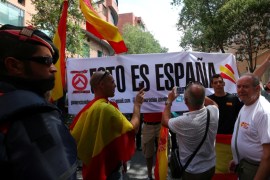