In a way, what happened yesterday at the Catalan Parliament was the second act of a drama that started during the session on the eve of 6-7 September, when the so-called “disconnection laws” – one law allowing for the referendum and another on the “Legal Transition” (with the elements of an independent Catalan Republic) – were passed. Then, the pro-independence bloc, which enjoys a wafer-thin majority (short of the two-thirds required to amend the Statute of Autonomy), passed these laws riding roughshod over Catalonia’s parliamentary rules, its own Statute and the rights of opposition MPs, in a grotesque late-night plenary, against the warnings of the lawyers of the Catalan Parliament and ignoring the Council of Statutory Guarantees (binding under Catalan law). The anti-independence opposition bloc left the session in protest and did not vote. The disconnection laws and the referendum were declared null and void by the Spanish Constitutional Court.

This is pretty much what happened yesterday. The secessionist bloc, again on the basis of their parallel legislation and a very disputed referendum on October 1st, tabled a resolution to proclaim the “Catalan Republic”, thus moving forward with a unilateral declaration of independence (UDI). Most of the opposition parties, led by Ciudadanos (non-nationalist liberals, second political bloc in Catalonia), boycotted the session and left the chamber – together with its lawyers, who warned that the resolution violated both the Statute of Autonomy and the Spanish constitution and could trigger legal responsibility. The 11 members of Catalunya Sí Que Es Pot (leftists, mostly against independence, especially a UDI) stayed, with 10 voting “no” and one blank vote.

In the end, the resolution garnered support of 70 MPs out of 135. That is roughly around 35 percent of the census and provides a good measure of actual support for independence in Catalonia, with recent polls showing very limited support for UDI – especially when the option of more home rule is on the table.

Right at the same time, the Senate approved the implementation of Artice 155 of the 1978 Constitution, based on the federal coercion principle and similar to Article 37 of the German constitution upon which it is based and other constitutions. Contrary to widespread assumptions, the measures requested by Spanish Prime Minister Mariano Rajoy do not amount to a full suspension of autonomy, which would eliminate the Generalitat (the Catalan executive body, restored prior to the entry into force of the 1978 Constitution) and the Catalan Parliament. The 2006 Statute of Autonomy remains in force, with the powers and competences contained therein.

The measures approved do nonetheless severely restrict the autonomy at the highest political level, chiefly with the dismissal of the entire Catalan government of President Carles Puigdemont, of the head of the Catalan Police (defendant in a judiciary process on his actions on October 1st), as well as of the Catalan government’s foreign delegations (with the exception of Brussels) and its PR body, “Diplocat”, widely perceived to be engaged in a very effective pro-independence (and anti-Spanish) lobbying campaign abroad. The powers of the Catalan government are now temporarily assumed by the authorities in Madrid.

This process has done much to both impoverish and divide Catalonia, as shown by a semi-empty Catalan Parliament voting UDI, but little to further its legitimate self-government claims.

Nonetheless, the actual roadmap approved by the Senate is a somewhat watered down version of the proposal submitted by the Council of Ministers, after an amendment of PSOE (Socialists, first opposition party). This amendment took out an initial proposal to take control over the main Catalan TV channel, TV3, also perceived as having become a propaganda outlet.

As a result of close negotiations between Rajoy’s government, keen on amplifying political support for Article 155, and PSOE, these steps now enjoy the legitimacy provided by two-thirds of the Spanish Parliament. They are nonetheless opposed by Podemos (leftists, somewhat caught wrong-footed given their opposition to both Article 155 and the UDI), and the nationalist parties. In turn, as a result of this UDI, Artice 155 enjoys support in Catalonia from Ciudadanos, Rajoy’s PP (a small force, though) and the main leaders of PSC, Catalan Socialists.

In parallel but distinct to Article 155, the judicial response to some of the actions by Puigdemont and other core leaders goes on. The Spanish Prosecutor could file charges against Puigdemont – in theory, and until yesterday, the highest representative of the Spanish state in Catalonia- on grounds of provisions applicable to coup d’etats and rebellions.

It goes without saying, these measures will probably lead to different measures of resistance by secessionist leaders and their mobilised constituencies, concentrated around the platforms of Catalan National Assembly (ANC), Omnium Cultural as well as CUP, an anti-system party against any negotiated settlement. This is coupled with the fact that many Catalans, though opposed to independence and UDI, also reject what they perceive an abridging of their self-government. In turn, the presence of the Spanish state in Catalonia, an essentially self-ruled region, is very limited, complicating the equation.

Authorities in Madrid are eager to avoid violence and thus mainly focus on law enforcement through police forces. But some level of violence and pockets of resistance, hopefully peaceful, cannot be ruled out. Symbolic images of martyrdom that are surely to further incense secessionists and their narrative on Spanish oppression.

Rajoy, a nimble, old guard politician, is mindful of the stakes. This is why, right at the same time he announced the dismissal of Puigdemont and the entire Catalan government and also under 155, he announced early elections in Catalonia for December 21, earlier than anticipated, which should also mark the beginning of the end of Article 155 phase and the return to order and rule of law in Catalonia. This move is seen as shrewd, if risky, aimed to hollow out the secessionist narrative, with pro-independence parties now faced with the dilemma on whether to boycott “elections by Madrid”, but in accordance with Catalonia’s own laws, or take part.

It is unclear what will happen. Some polls show that parliamentary forces of pro-independence and non-secessionists could roughly remain even, a tad up, a tad down – though minor changes could be a game-changer for any majority in Catalonia, given the fragmented political space. The call for elections enjoys majority support in Catalonia and could provide an opening for returning to political normalisation, including progress towards constitutional reform in the mid-term – a process Rajoy agreed to with PSOE a few weeks ago, including more home rule in Catalonia. The main Catalan newspaper, La Vanguardia, welcomed the move, noting that “on this occasion, it cannot be denied to Rajoy, so often prone to slow motion, a fundamental virtue: the speed with which he seeks to protect, through electoral means, the rights of all Catalans, half of which have been abridged, in an unacceptable and repeated manner, by the government of Puigdemont”.

Time will tell whether this Catalan Republic proclaimed yesterday, not recognised by a majority of Catalans or any relevant actor, will survive 2017. Some argue that this is the end of the secessionist process’ leap forward. It is evident that in their naked assertion of plebiscite majoritarianism over pluralistic democracy; in their contempt of other Catalans’ preferences; in a post-truth that spins “Spanish oppression”, asserted by an elite firmly in control of power in Catalonia for nearly un-interrupted 40 years, that denies the dramatic capital flight, this process has done much to both impoverish and divide Catalonia, as shown by a semi-empty Catalan Parliament voting UDI, but little to further its legitimate self-government claims. 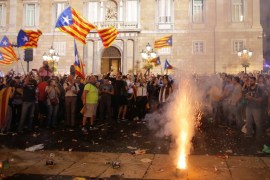 A round-up on international reaction after the Catalan parliament voted in favour of breaking away from Spain. 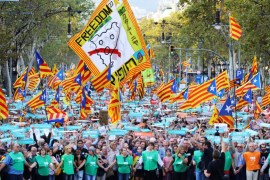 Despite what Madrid is saying, activating Article 155 means it will take direct control over Catalonia.