In Oscar Wilde’s story, Lord Arthur Savile’s Crime, the main character wanted to blow up one of his relatives. Because he didn’t know anything about bombs, he decided to turn to someone with experience. Who in London could he ask for advice? A Russian nihilist, of course!

In the late 19th century, Russians were always thought to be associated with revolutionary struggle and political terrorism. There is nothing surprising about that. Crowds of Russian anarchist intellectuals living in exile filled European cafes, while in Russia, revolutionaries periodically attempted assassinations of the Tsar (sometimes successfully), plotted big terror attacks and organised underground networks of banned groups and parties.

What is more, practically all Russian cultural production of the 19th century was created by rebels. One of the biggest Russian poets, Alexander Pushkin, was openly sympathetic to the anti-serfdom rebellion of 1925. Fyodor Dostoyevsky was sentenced to death for participating in a revolutionary circle (the sentence was rescinded at the last moment and this unpleasant episode appeared in his novel, Idiot). Lev Tolstoy, while denouncing violence, was one of the most uncompromising critics of the tsarist regime and the Church; his writings were so radical that, if published today, would certainly be banned.

When, in the end, a revolution did happen in Russia, the democracy it established lasted a bit more than half a year, from February to October. With the Bolshevik October coup and the subsequent foundation of a totalitarian system, the revolution turned from a radical idea of free-thinking people to a repressive state cult. Streets, squares, and cities were named after revolutionaries, but in reality, Soviet citizens could not even think about a revolution, much less doubt the righteousness of the communist party. The regime, while preaching about the revolution as something good, physically destroyed people’s ability to think critically and resist.

After the collapse of the Soviet Union, Russia breathed the air of freedom again, but not for long. Today, 100 years after the revolution, the country has gone back to its starting point. It again suffers from an economic crisis; the authorities again are trying to mobilise support among the population using the spectre of foreign enemies. And like 100 years ago, the patriotic upsurge amid war has exhausted itself; people have started worrying about domestic issues more and more. Just like 100 years ago, the State Duma doesn’t do anything; the courts are not independent; and the authorities are actively using censorship, propaganda and the “secret police”. Just like 100 years ago, a major part of the Russian intelligentsia is denouncing the Russian government-in-exile; the points of their criticism have not changed much.

Putin’s rule looks much more tsarist than Soviet. There is no Soviet “collective rule”, no all-powerful party or a clear ideology and no strong repressive apparatus. But just like the monarchy, it grooms a bureaucratic aristocracy which has the liberty to distribute high-level positions at state-owned banks and corporations to its own children. The only difference is that Russian President Vladimir Putin does not have a son to be his successor (unlike his Azerbaijani and Belarusian counterparts). But in monarchies too, power is not always inherited; what is important is that there is no problem when its transfer happens – and that we already observed in 2008 when Dmitry Medvedev took up the presidency and then gave it back in 2012.

Regardless of the economic situation, there will be a growing number of protests before the presidential elections.

It is also important to point out that unlike the Soviet regime, Putin’s rule does not rely so much on repression as much as what psychology calls “learned helplessness”. In the 1960s, American psychologist Martin Seligman investigated this concept; during his experiments, he found that a dog in a cage receiving electric shocks at random would eventually learn that nothing it does can stop them and would not try to avoid them any more, falling into depression. This is a very good illustration of the psychology of a significant part of the Russian population. Over the past decades, Russians got used to the idea that they have no way of pressuring the authorities and stopped even trying to show any type of resistance.

Unlike Soviet times, today the “cage” is open; the authorities are hardly able to suppress a mass protest. Recent protest experiences in the former Soviet republics and Arab countries show that even if the security apparatus is ready to use gunfire on protesters, that does not guarantee regime survival. In this sense, it’s not just Vladimir Putin staying in the way of another revolution in Russia, it is the scepticism and melancholy of the general population.

And this is the main difference between today’s Russia and Russia of 1917. The main revolutionary factor back then was an active citizenry. The revolution erupted spontaneously and unexpectedly, but not without a prior history: it was preceded by mass labour strikes, the work of various political parties and movements, critical publications in the press (even if at times censored), and even the efforts of members of the State Duma who even if largely stripped of any power, continued to deliver fiery speeches (the likes of which have never been heard in today’s Russian parliament).

Does this mean that there will not be a new Russian revolution? Of course, it doesn’t. We know plenty of examples of revolutions happening in countries with much less developed civil societies and much more authoritarian regimes. What currently guarantees stability is the low unemployment rate (thanks to the government sector) and an average income that somewhat provides for a normal standard of living (around $600 at the moment). But there are also factors that the Russian government cannot control – like lower oil prices or harsher sanctions from the West – which could destroy the Russian economy.

But regardless of the economic situation, there will be a growing number of protests before the presidential elections. The youth, the backbone of this protest wave, have not had the time to find out what “learned helplessness” means. Whether their spirit could spark a revolution is difficult to say, but chants “Down with the Tsar!” already rang loud and clear at the last protest in Moscow, which by the way, happened just a few hundred metres from Revolution Square. 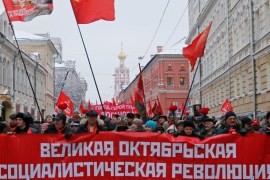 The legacy of the Russian Revolution obliges, one hundred years later, neither celebration nor mourning. 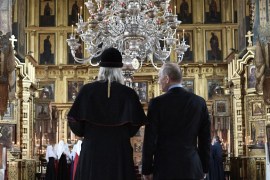 Putin and the ‘triumph of Christianity’ in Russia

The rise of the Orthodox Church in Russia appears unstoppable, write filmmakers Glenn Ellis and Viktoryia Kolchyna who went to investigate the close ties between the church and Putin.