It is now official. Spanish Prime Minister Mariano Rajoy announced on October 21 that his government would enact the controversial Article 155 of the Spanish Constitution to strip Catalonia of its autonomy. One week on, this previously little known constitutional clause is still the most discussed subject in every corner of the country.

Refusing to engage in dialogue

In his speech to the Catalan parliament on October 10, Catalan President Carles Puigdemont clearly articulated his desire to engage in constructive dialogue with the Spanish state. Yet, Rajoy responded with all the weight of the law, once again ignoring the will of a considerable section of the Catalan population.

By refusing to engage in a conversation regarding the future of Catalonia, the Spanish president communicated to the Catalan population that the central government would neither listen to them nor allow a judicial solution to this grave political conflict.

Madrid even took the provocative step of imprisoning the presidents of two major Catalan cultural institutions – Omnium Cultural and Catalan National Assembly. Jordi Cuixart and Jordi Sanchez were imprisoned without bail on October 16, pending a trial on charges of sedition in relation to their separatist organising efforts. Their imprisonment further deepened the fractures in the Spanish society. More than 200,000 people took to the streets in Barcelona, demanding the release of the two men they consider political prisoners. Cuixart and Sanchez are now seen as “martyrs of the cause” in Catalonia – two people jailed for their political beliefs, in the 21st century, in the middle of Europe.

In light of last month's developments - the use of brute force on people that are trying to participate in a referendum, jailing of Cuixart and Sanchez and the decision to enact Article 155 - Madrid can no longer claim that the people of Catalonia are enjoying full democratic freedoms.

Of course, their imprisonment was framed completely differently in Madrid. The central government, once again not afraid to use a language of confrontation, said the two men were rightfully jailed, as they were inciters of the “separatist order”, an expression painfully reminiscent of the darkest chapter of 20th century Spain.

The consequences of Article 155

So, the two sides of this political crisis cannot even agree on what has actually been happening before our eyes. And, they also have very different interpretations on the possible consequences of the enactment of Article 155.

According to Madrid, enactment of this constitutional clause is not in any way an attack on Catalonia’s hard-earned autonomy. They ignore the fact that this referendum was only the latest chapter in Catalonia’s decades-long journey towards independence and, they claim, Article 155 will simply “fix” the problems caused by an “unlawful” referendum. They claim this move will only “restore the constitutional order in Catalonia”. They say the people of Catalonia are not oppressed, and the people of Catalonia will not be oppressed even after the enactment of Article 155.

Rajoy listed four goals for enacting Article 155: to return to legality, to recover normality and co-existence, to continue with economic recovery and to have an election in Catalonia in “normal political circumstances”.

Yet, by taking a brief look at what Article 155 will actually bring to Catalonia, we can easily see that Rajoy’s claims do not have a leg to stand on.

After the enactment of Article 155, the Catalan regional government will be dissolved; in other words, the central government in Madrid will start governing Catalonia single-handedly. In six months, early regional elections will be forced.

In addition, it seems that President Puigdemont – the democratically elected leader of the region – will have to face charges and may end up as his predecessor, Artur Mas – removed from political life and forced to pay thousands of euros in fines.

The enactment of Article 155 will also allow the government of Spain to review all future parliamentary activity in Catalonia. This means that Catalonia’s autonomy will be reduced to something symbolic, at best, as the regional parliament will lose the authority to pass any legislation without the central government’s strict approval.

In order to finish the destruction of Catalan self-government, the central government will also take control of the Catalan public media (TV3, Catalunya Radio). Catalan journalists working for these organisations have already demonstrated their total rejection of the measure, claiming that they will not abide. Of course, the government of Spain already resorted to a threat to solve this “small problem” of journalistic integrity: any public official – including journalists – who does not respect the constitutional measures will be removed from their role and punished by law.

So in the end, a hard task awaits the Spanish government if it wants to prove to the world and the people of Catalonia that it is not attacking the autonomy and the dignity of the Catalan people.

In light of last month’s developments – the use of brute force on people that are trying to participate in a referendum, jailing of Cuixart and Sanchez and the decision to enact Article 155 – Madrid can no longer claim that the people of Catalonia are enjoying full democratic freedoms.

At the end of this week, the Senate will approve the enactment of Article 155 and the Parliament of Catalonia will also meet to discuss the issue.

The Catalan government, now facing an existential threat, may see this as an opportunity to declare independence – as even Catalans who do not support independence view the enactment of Article 155 as an aggressive and unjust measure. Yet, I still believe that declaring independence, at this point in time, will not be the most sensible option, especially if the people of Catalonia really want one day to become a recognised independent state and a respected member of the international community.

If the Catalan government declares independence in the coming days, Spain will not hesitate to apply the full weight of the law – and its security forces – to stop this from happening. Therefore, the only sensible option for the Catalan people is to insist on dialogue.

Catalan leadership now needs to listen to the sound voices coming from other parts of Europe and work towards de-escalation and dialogue. This political conflict needs to be solved, and it needs to be solved without humiliation, so that future generations can enjoy peaceful coexistence in Europe.

Madrid is making this harder for the Catalan leadership by refusing to listen to the will of the Catalan people. Prime Minister Rajoy, with the support of several powerful European leaders, seems to be on a quest to end the Catalan “conflict” by taking measures to destroy the cultural essence of the Catalan people – turning Catalonia in to a place that will one day be remembered as the historic homeland of the “extinct Catalan people”. And the enactment of Article 155 is the first step in this path. He is continuing a strategy favoured by many Spanish leaders in the past: to absorb the Catalan identity into centralist and exclusive Spanish nationalism.

As the former education minister of the Popular Party Jose Ignacio Wert said in 2012, Madrid’s “goal is to Spanishise Catalan students“. Now, the central government will have the opportunity to control the lives of the Catalan youth, make them “Spanish” and to eradicate any claim that may one day “break Spain” – a fear that the current Spanish political class tragically shares with the late dictator Franco.

Today, Catalonia is once again between the sword and the wall, cornered and silenced. In 1971, during a speech to the United Nations, famous musician Pau Casals defined Catalonia as “a nation of peace”. What will Catalonia be like in the future? The answer to that question will be determined by Madrid. 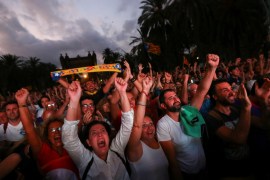