In the early hours of Monday, two regular Iraqi divisions, supported by thousands of combatants from the Federal Police and Counter Terrorism Service, began a two-pronged offensive against Kurdish-held Kirkuk, seeking to reclaim the disputed city more than three years after Iraqi Security Forces (ISF) fled it in the face of an assault by the Islamic State of the Iraq and the Levant (ISIL), also known as ISIS. A little more than 12 hours later, the ISF managed to restore their control over the oil-rich city where they have been absent for years, severely upsetting Kurdish plans for independence.

Very early in the operation, the Iraqi military announced that it had taken over the K1 military base and the nearby Kirkuk Air Base west of the city. This was denied by the Kurdistan Region Security Council, which said in a statement that the Peshmerga destroyed at least five US-made Humvee armoured vehicles being used by the state-sanctioned, but Iran-sponsored, militias from the Popular Mobilisation Forces, or Hashd al-Sha’abi in Arabic. However, by late afternoon, Iraqi soldiers were taking photographs of themselves in the former governor’s office in downtown Kirkuk, and the national flag had replaced the Kurdish Regional Government’s (KRG) over the city skyline.

The Iraqi military’s advance was apparently facilitated by factionalism within the ranks of the Peshmerga, a force whose flaws have now been laid bare. The Taza Khormatu district southeast of Kirkuk was surrendered after Peshmerga units loyal to KRG President Masoud Barzani‘s rivals in the Patriotic Union of Kurdistan (PUK) – the late Jalal Talabani’s party – withdrew from their areas of responsibility. These units with partisan loyalties also withdrew from their headquarters in Qasbat al-Bashir, 20 kilometres south of Kirkuk, three days before the offensive began, and without a single shot being fired.

PUK officials said that they handed back military bases as there was a deal to surrender them to Baghdad before ISIL overran the region in 2014. Barzani’s Kurdistan Democratic Party, however, will see the decision by the PUK to withdraw its fighters from major approaches to the city as handing the enemy the keys to the city gate. Hemin Hawrami, senior assistant to Barzani, tweeted that the PUK had “betrayed Kurdistan and [the Peshmerga] … by abandoning key fronts”, accusing them of being part of an offensive that he said was being led by Iran’s Islamic Revolutionary Guard Corps.

Making matters potentially worse for Barzani was the appearance of flags belonging to the Kurdistan Workers’ Party, or PKK, who are blacklisted as a terrorist organisation by the United States, the EU, and – most importantly in this conflict – neighbouring Turkey. Turkey, who has fought the PKK domestically for decades, was incensed at their former ally Barzani and the alleged presence of PKK fighters in Kirkuk was denounced by the Iraqi government as a “declaration of war”. Although the allegation was swiftly denied by the KRG on Sunday, the Turkish Foreign Ministry pledged on Monday that it would work with Baghdad to help destroy PKK elements in Kirkuk.

After all, the Peshmerga are largely equipped with US-made weapons, while the Iraqi military is also currently using American-made M1 Abrams tanks and heavy artillery against the Kurds.

However, one cannot help but suspect that Baghdad’s focus on a PKK presence is for Turkish consumption. After all, it was only very recently that the Iraqi government was at loggerheads with Turkey over its military base in Bashiqa in northern Iraq, and Baghdad has tolerated PKK affiliates – such as the Yazidi YBS – on its border with Syria. Baghdad and its allied militias have had long enough to contain or even defeat these PKK affiliates, yet have done nothing until now. Their sudden action is designed to appeal to sentiments in Ankara, its latest unlikely ally in the wake of the Kurdish independence referendum last month, who will also be seeking to use an alleged PKK presence to garner public support for moving against their one-time ally Barzani.

US may reset Iraq to pre-ISIL stage

The KRG has also attempted to characterise this offensive as an Iranian-led operation due to US President Donald Trump’s refusal to certify the Iranian nuclear deal and call for tougher sanctions against its elite military wing, the Islamic Revolutionary Guards Corps (IRGC) on Saturday. This demonstrates a lack of Kurdish confidence in the United States‘ willingness to intervene on the KRG’s behalf, and a desire to get Washington back on board with the Kurds, especially considering the Peshmerga’s assistance to the US-led anti-ISIL coalition.

So far, however, the Pentagon has only stated that it encourages “dialogue” between the belligerents, and desired the parties not to undertake any “destabilising actions that distract from the fight against ISIS”. This statement was certainly not what Erbil was hoping for, especially as the US went on to state that it continued to “support a unified Iraq”, and characterised the independence referendum as an “unfortunate” and “unilateral” move.

With Washington’s lack of desire to intervene, it is possible that American strategists were willing for the Iraqi military to advance to recapture Kirkuk before moving onto other disputed territories under the KRG’s de facto – but not de jure – control. That said, it is extremely unlikely that the US will allow Baghdad to reassert its control over the autonomous Kurdish region as a whole, but will likely exert pressure on both sides to stop fighting once Baghdad’s and Erbil’s positions have been reset to a pre-2014 state of affairs before ISIL burst onto the scene.

After all, the Peshmerga are largely equipped with US-made weapons, while the Iraqi military is also currently using American-made M1 Abrams tanks and heavy artillery against the Kurds. Without US support, the Peshmerga was easily overwhelmed and may soon also be forced to the negotiating table to concede defeat and nullify their independence vote. Equally, without American supplies, and with the threat of other measures against Baghdad especially considering Iranian involvement, the Iraqi military is unlikely to advance far beyond Kirkuk.

With such regional and international forces being brought to bear against Barzani’s ambition for an independent Kurdistan, and with the crushing loss of oil-rich Kirkuk as well, it seems that the Kurdish leader will have to sue for peace. Unfortunately for those who voted “Yes” in last month’s independence poll, this will mean that, for now at least, their dream may have to remain just that. 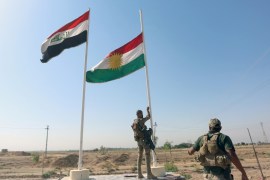